To get an idea of where the U.S. data privacy movement is heading, look to California.

In January, California established the nation’s most comprehensive set of state data privacy laws when its Consumer Privacy Act (CCPA) went into effect. The law enabled Californians to discover what types of personal information businesses were collecting, to request that companies delete personal data, and to opt-out of its sale.

“The California Consumer Privacy Act was a major win for the state of California and the country, but we have to do more,” Yang said in a statement. “Technology is changing more rapidly than ever before, and tech corporations are already lining up to undermine the CCPA. It’s up to us to protect consumers and strengthen our privacy rights to global standards. Our data should be ours no matter what platforms and apps we use.”

Proposition 24 would broaden the CCPA by allowing Californians to opt-out of data collection from businesses; making it harder for businesses to use “sensitive data” about things like race, sexual orientation, and finances for advertising; and creating a new agency that would enforce the state’s privacy laws, among other amendments.

Still, some advocates say even these additions to the CCPA don’t go far enough, including organizations like the ACLU of California, the Consumer Federation of California and the Electronic Frontier Foundation (EFF).

Calling it a “mixed bag of partial steps backwards and forwards,” the EFF said it wouldn’t support Proposition 24 because (to name a few reasons) it: 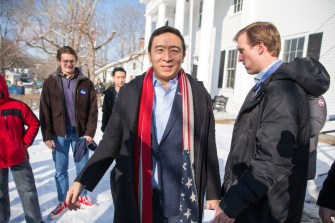 As for Yang? It’s unclear what the former presidential hopeful, whose campaign was based in part on data privacy, thinks of these critiques. But in a recent interview with KSRO, Yang said the U.S. lags far behind European nations in terms of data privacy laws, and that Proposition 24 would be a huge step towards our data dignity. He added that other states beyond California would likely follow suit if the proposal passes.

Yang is also spearheading the Data Dividend Project, a “movement dedicated to establishing and enforcing data property rights and to getting you compensated when companies monetize your data.” The project, which operates under the laws established by the CCPA, aims to tax tech companies when they use consumer data, and to support new data privacy legislation across the country. (Some critics have questioned the efficacy of the project.)

In an op-ed about his data dividend proposal published in the Los Angeles Times, Yang wrote:

“If Congress and other states adopt legislation like the CCPA, millions more would be able to band together with even greater bargaining power to hold tech companies accountable and, ultimately, demand that they share some of the revenue generated from consumers’ personal data.”

Social media isn’t the majority – it’s the vocal fringe.
▸
with
Todd Rose
Up Next
Health