When women choose what to wear, how much of that decision is based on how other women might perceive them in public? That’s the main question of a new study, which found that women tend to strategically dress modestly in order to avoid intrasexual aggression.

Publishing their findings in Social Psychological and Personality Science, the researchers wrote that relatively little is known about women’s intrasexual aggression, though men’s has been studied for more than a century.

“Even less work has focused on how women actively defend themselves against such aggression,” the researchers wrote. “Yet, we should expect that women can (a) grasp which cues/signals evoke same-sex aggression and (b) strategically damp (some of) those cues/signals when aggression risk is heightened, thereby avoiding the potentially high costs of victimization.”

It’s well known that women tend to socially exclude or be indirectly aggressive toward women who are desirable or show signs of being sexually permissive. They’re seen as threats. For example, studies show that women who wear red are more likely to attract men, as well asaggression from other women.

In the new study, the researchers tested how intrasexual aggression would likely play out in various scenarios. One scenario went like this: Sara (a woman who recently moved to a new city) used a friend-finding app to meet Carol (a prospective new friend) and Martha (Carol’s coworker) at a Starbucks. 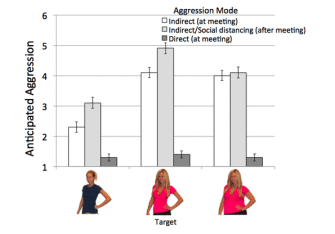 The participants predicted that Carol would be most aggressive (primarily in the form of social distancing) to the version of Sara who was traditionally attractive and wearing revealing clothing. Interestingly, there was no difference between the predicted levels of indirect aggression toward Sara at either weight when she wore revealing clothing.

“This pattern of findings suggests that women might incur such aggression when they are perceived as intending to seek male attention, regardless of their capacities to successfully do so.”

In three more experiments, the researchers asked women which type of outfit they’d wear to different kinds of social events. Some of the hypothetical events were same-sex, others mixed. The researchers figured that women would strategically change their sartorial strategies based on whether men attended, considering that dressing revealingly around men might be beneficial.

In general, women said they’d dress more modestly when attending a same-sex event, no matter whether it was a professional or social gathering. But attractive women were even more likely to dress modestly at same-sex events. (Particularly, attractive women were especially likely to dress modestly when meeting a prospective female friend, but not when meeting an existing female friend.)

The researchers said this was consistent with past studies that found attractive women are especially vulnerable to aggression from other women, and suggested that dressing modestly is likely a strategic defense against such attacks.

“Like men, women can and do compete — over friends, status, romantic partners,” study author Jaimie Arona Krems (@JaimieKrems), an assistant professor of psychology at Oklahoma State University, told PsyPost. “Once we acknowledge the reality that women are active agents who compete and aggress against one another, we can generate so many questions about how women defend themselves against this aggression.”

“More specifically, women are deeply rational and strategic; women are aware of the threats posed by others and act in ways to avoid those threats. Here, for example, we show that women are aware that appearing and/or dressing certain ways make them more likely targets of other women’s aggression, and that, in situations where this knowledge is salient, and for women most at risk of incurring aggression, women then choose to dress in ways might help them avoid others women’s slings and arrows.”

Still, the researchers noted that there are multiple reasons why women choose to dress how they do, and avoiding intrasexual aggression is only one.

“…because attracting and maintaining same-sex friends can confer numerous important benefits for women, future work could benefit from exploring how women might manipulate their appearances to establish and maintain same-sex friendships—as well as to avoid same-sex aggression,” the researchers wrote. “For example, donning the baggy sorority t-shirts and short shorts common to young women on some college campuses may communicate not only the wearer’s on-campus status but also her dedication to her coalition.”