As sleep science continues to discover the necessary benefits of a good night’s rest, roughly one-third of Americans sleep less than six hours every night. Two new studies, both published in the journal Science, and both conducted on mice, have deepened our understanding of why sleep matters so much to cognitive and physical health.

The downsides of sleep deprivation are well-known. From an increase in automobile accidents to stark cognitive decline (sometimes leading to dementia) to weight gain, a regular sleep schedule is the best recovery tool we have in our biological arsenal. Napping has been shown to help, though the eight-hour overnight prescription seems to hold up best, for most people. Sleeping too much, it turns out, has adverse affects as well, but that’s not a problem most run into.

For the studies published in Science, researchers were able to better understand the relationship between sleep cycles and our circadian rhythm, the internal timekeeper that preps us for shutting down and waking back up. While a number of factors play into that rhythm — screen time, caffeine intake, habitual behaviors, work schedule — by honoring its natural cycle you prime for your body for optimal health.

Falling off the cycle, it turns out, disrupts communication between the neurons necessary for maintaining a healthy relationship to our nightly ritual.

In the first study, researchers at the University of Zürich discovered that our circadian rhythm regulates protein transcription. When you’re feeling tired and head off to bed, the proteins necessary for healthy cellular functioning are produced, peaking at two points in the day: right before bed and upon waking up. Sleep sets into motion the transcripts for protein-building, while waking up promotes synapse-firing, the communications device that allows neurons to speak.

When mice were deprived sleep, the transcripts malfunctioned. The messenger RNA (mRNA) were unable to deliver the messages necessary for completing the protein-building and synapse-firing phases that sleep provides. The team, led by Sara B. Noya at the Institute of Pharmacology and Toxicology, writes:

The takeaway: honoring your circadian rhythm — some of us are early risers, others late to bed, so nuance matters; what appears stable is that seven-to-nine hours of sleep works for most everyone — will result in the proper building of proteins and communication between neurons. Depriving yourself of sleep will not only make you tired; your mental health will pay the price over time. 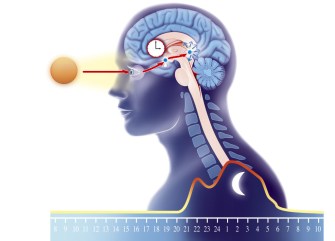 Illustration of the biological clock. Depending on sunlight perceived by the eye, signals are sent to the suprachiasmatic nucleus, home of the circadian clock, located in the hypothalamus, which controls various biological rhythms. The brain controls the secretion of melatonin (sleep hormone), which increases as light diminishes.

For the second study, a team led by Franziska Brüning (Ludwig Maximilian University of Munich; the Max Planck Institute of Biochemistry) measured the attachments of a phosphate molecule that turns these proteins on and off every four hours, aka “circadian clock-driven protein phosphorylation.” Previous studies have measured this process every 24 hours, making this new research more revealing in terms of how these proteins operate.

As with the companion study above, they discovered two peaks, one upon sleeping, the other before waking. The team writes that previously it was not well understood how time of day affected phosphorylation. By depriving mice of sleep, an abundance of the process was lost in forebrain synapses. They write:

“Our data uncover molecular processes in synapses whose activity is temporally gated by phosphorylation, such as synaptic inhibition at dawn and excitation at dusk.”

Maria Robles, who took part in both papers, says these companion studies reveal the our brain has developed “a beautiful way to control” the molecules necessary for healthy physical and cognitive functioning. While mice are not men, our shared DNA allow such studies to reveal the inner workings of human physiology. These two studies bring us closer to revealing what we already instinctually know: nothing replaces a good night’s sleep.