The comparison between computers and the human brain is hard to get away from. It is often a useful analogy, but sometimes conflicts with how our brains actually work.

One of the continuing questions about how our brains are similar or dissimilar to computers is how they process code. Do we process it as if it is a language or a series of math problems? This question is important for a number of reasons. From an educational standpoint, knowing how our brains work when dealing with coding problems could provide insights into how to teach it.

Some schools are beginning to allow students to select coding languages for a “foreign” language credit and are approaching the subject in the same way they might teach French. This might be a decent way to get more students into coding but could backfire if reliance on language learning techniques is misplaced, for example. Likewise, attempts to teach coding as math might be equally mistaken.

To help settle the debate, a new study analyzed the brain activity of computer programmers while they read code.

The study, carried out by a team from MIT and Tufts University, had two dozen participants read code, English, and logic puzzles while in an fMRI machine. By seeing which parts of the brain lit up while doing these tasks, the researchers could determine how our brains process coding languages.

If the areas of the brain associated with language processing were to light up, then we treat code like we treat languages. The same would go for the math parts. The control tasks, reading either a real sentence or a nonsense one and memorizing the location of colored squares, demonstrated the baseline activation levels for these systems in each subject.

The coding languages used in the study were Python, a language considered highly readable by many, and ScratchJr, a symbolic picture code designed for children. 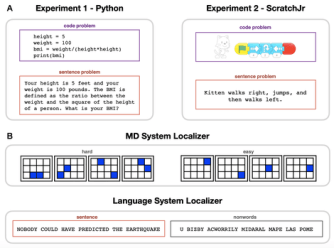 An example of the code and puzzles that might be seen in the experiment. ​Credit: MIT

When the subjects were in the machine, they were asked to work through the code and predict the output. The brain scans showed only limited responses in the brain’s language processing centers, but a considerable amount in the multiple demand (MD) system, which often handles math, logic, and executive tasks.

While this may sound like a win for the “coding is math” argument, it isn’t quite the slam dunk you might think it is. This system handles most of our “difficult” thinking and is useful for many things. Logic and math typically cause the left half of it to fire up while the right half handles abstract thinking.

Working with Python caused both sides of the system to activate. ScractchJr worked the right side a little more than the left.

These findings suggest that the brain handles coding as a unique and complex process. As lead author Anna Ivanova put it: “Understanding computer code seems to be its own thing. It’s not the same as language, and it’s not the same as math and logic.”

The authors note that this does not rule out the possibility that very experienced programmers might have specially dedicated areas of the brain for coding. It also doesn’t settle what the right way to learn the subject is; it could be the case that learning it requires elements from both pedagogues.

This study was very small, it only involved about twenty people, and all of them had knowledge of the coding language they were tested with. The codes used are noted for their readability, and the results may differ if future test subjects without coding knowledge are trying to decipher something like Piet.

Despite these limitations, the study does provide helpful information about how the brain handles coding languages. It will undoubtedly be the first of many investigations into this topic.

Dedicated circuits evaluate uncertainty in the brain, preventing it from using unreliable information to make decisions.
The Present

Almost 10% of all new jobs created between 2020 and 2030 will unfortunately be some of the lowest paid.
The Past

Elevated blood pressure, even within the normal range, is associated with accelerated brain aging.
Up Next
Hard Science

The discovery could help astronauts find better ways to grow food in space.