Watch out forest bathers, you have competition.

Perhaps better put, you have an addition to your ritual. According to a new study, published in the journal Emotion, one surefire way to improve your mental health is by taking regular 15-minute “awe walks.”

Researchers at the UC San Francisco Memory and Aging Center and the Global Brain Health Institute wanted to see if these focused walks in the woods could improve prosocial emotions in seniors. The team chose this cohort due to longstanding links between cognitive decline and mental health problems associated with anxiety and depression.

According to associate professor Virginia Sturm, loneliness is particularly damaging to older adults and can help drive the onset of Alzheimer’s disease. She was quite happy with the results.

“What we show here is that a very simple intervention – essentially a reminder to occasionally shift our energy and attention outward instead of inward – can lead to significant improvements in emotional well-being.”

The walking group was comprised of volunteers in their sixties to eighties. Each participant was told the study was about exercise, when in reality their task—taking a selfie at the end of each walk—revealed the actual intentions of researchers.

Importantly, participants were instructed to observe details while walking around the forest. If the goal was only exercise, volunteers were likely to power through trails without noticing their surroundings. This is where awe comes into the picture.

“Awe is a positive emotion triggered by awareness of something vastly larger than the self and not immediately understandable — such as nature, art, music, or being caught up in a collective act such as a ceremony, concert or political march.”

The post-walk selfie is key. Week after week, their smiles grew larger. Incredibly, their bodies shrunk in the photos—the photographer stepped back to include more of nature. Instead of the normal close-ups we associate with selfies, volunteers naturally became more integrated with their environment, without any prompting from the research team.

This is exactly what was reflected in those selfies. 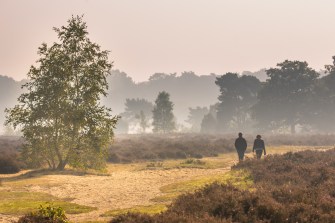 Classical Japanese art offers plenty of examples of interdependence. Humans are rarely the focal point in these landscape paintings. People only appear as part of a much larger scene. This trend cuts across Buddhist art, perhaps unsurprisingly given the philosophy stresses collectivity. Happiness levels tend to be higher in these societies than in individualist nations.

America, arguably the global leader in individualism, has continually ranked lower on world happiness charts over the last 40 years. Meanwhile, our rates of Alzheimer’s disease rise every year.

Can a 15-minute awe walk change all of that? Not completely, but we’ll take whatever help we can get. As mythologist Joseph Campbell once remarked, “awe is what moves us forward.” He cited awe as a primary driver in the creation of mythology: the overwhelming sensation that you’re part of something grand.

As Sturm says, this is a low-cost, worthwhile means for alleviating distress and filling people with gratitude and compassion. Given the state of the world, those qualities are in high demand.

“I find it remarkable that the simplest intervention in the world – just a three-minute conversation at the beginning of the study suggesting that participants practice feeling awe on their weekly walks – was able to drive significant shifts in their daily emotional experience. This suggests promoting the experience of awe could be an extremely low-cost tool for improving the emotional health of older adults through a simple shift in mindset.”

Research has shown the benefits of mindfulness, but the current mindfulness craze cannot deliver on its overhyped promises.
Life

These enormous centipedes are straight out of science fiction.
The Past

Searching for happiness in the midst of personal or societal crises are nothing new.
Up Next
The Present