To some, attaining leadership is like winning the ultimate prize, while for others it represents an opportunity to help. A new study in Child Development finds that young children have a very clear opinion about what makes a leader, and it has nothing to do with arriving at a position of privilege. It turns out 5-year-olds understand the attributes that make someone worthy of being a leader better than lots of adults do, including some powerful people. 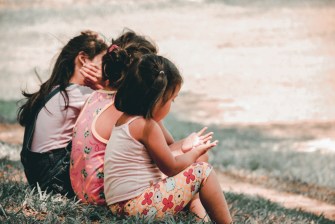 Children have to learn how to function socially by developing a sense of what they can expect in their interactions with others. When dealing with an adult, certainly the adult assumes a leadership role. However, in groups of children, leaders also emerge. The researchers were interested in exploring how kids feel about, and what they expect of, their leaders.

We understand how this works for adults with decades of social experience. “In leadership hierarchies,” says the study, “individuals show respect and defer freely to those who take charge.”

The study investigates, on the other hand, what constitutes leadership for a person who is not yet fully socialized and is also likely to be at an especially pragmatic — “Who will feed me? Who will keep me safe?” — stage of life. Young children may thus serve as a sort of tabula rasa through which we can discern signs of how grownups really feel, or maybe should feel, about leadership and authority. 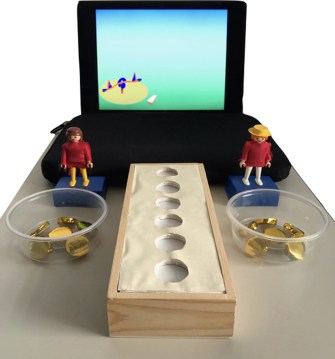 In the experiments, the person with a hat is the leader.Credit: Stavans, et al./Child Development

The researchers tested 5-to-6-year-old children in particular for a couple of reasons. First off, kids of this age are known to be aware of social hierarchies and leadership roles. Second, they’re capable of tracking the contributions of individuals within a group and will withdraw from situations where others aren’t doing their part.

The researchers conducted three experiments. 48 children from local secular Israeli kindergartens participated in the first experiment, 40 in the second, and 48 in the third. In all of the experiments the participants were led through onscreen stories that presented amusement park scenarios exploring:

The story narratives involved the need to contribute coins to activate rides — the children were given physical coins to make the contributions feel more tangible. Decisions were also to be made regarding who got to go on rides, and on which rides.

Children were allowed to influence the stories at times, and were also presented “actual” narratives onscreen to which their reactions were recorded. For each story, the kids assessed how fairly and effectively the protagonists and/or leaders in a dyad served the attainment of that group’s common goal.

In the first experiment, when children experienced egalitarian relationships, they expected that both members would contribute an equal number of coins — kicking in either more or less than one’s equal share was unacceptable. For dyads with leaders, those leaders who contributed more than their equal share of coins were seen as acceptable. Leaders who offered fewer were deemed unacceptable. This suggests that to these children, leaders are expected to sacrifice toward a common goal, and that entitlement leaders are not qualified to lead.

The most significant finding of the second experiment was that when one member of a dyad was identified as a leader — without the type of leader being specified — the children assumed that the person was an authoritative leader, with decision-making power and a greater measure of responsibility for achieving the goals of a dyad.

In this experiment, kids were shown supposedly egalitarian relationships were one dyad member kept more coins for themselves. The children adjudged that person to be an entitled leader, and they were none too pleased about it.

She adds, “Because children were not asked about familiar kinds of authority figures, such as teachers and parents, nor about situations in their everyday lives, their responses reflect sophisticated ideas about leadership applied to novel protagonists and situations. While impressive, we have yet to understand how children come to think leaders have increased responsibility, at what point do they begin to represent leaders’ increased entitlement (as adults do!), and how dependent are these representations on context.”

The authors hope that they study can provide some guidance for adults when dealing with the young ones in their charge. First, by themselves being the leaders children expect. Second, the study highlights a need to help children who eventually begin to convey entitlement upon leaders to understand that these entitlements are valid only when they are rewards for a leader whose responsibilities have been fulfilled.

Tags
childrencommunityleadershipparentingrelationshipssocietyyouth
In this article
childrencommunityleadershipparentingrelationshipssocietyyouth
Related
Only high performers pass this kind of job interview
Here’s what job interviewers are testing you for, according to economist Tyler Cowen.
▸
4 min
—
with
Tyler Cowen
Sun Tzu: 4 battle principles for business leaders
Strategy advisor Roger Martin explains how 2,000 year old military thinking is useful in modern business strategy.
▸
8 min
—
with
Roger Martin
The Learning Curve
5 ways to set yourself up for success
There is no sure-fire formula for success, but you can be better prepared to create your own.
The Learning Curve
The dark side of workplace recognition
Our desire for recognition at work can lead us to perilous ends.
Thinking
6 unexpected benefits that emerge during crises
Historical analyses reveal that crises almost always yield surprising benefits.
Up Next
Neuropsych
Study: 33% of people fantasize about being in a sexually open relationship
Most said they want to act on their desire someday. But do open relationships actually work?