When sheltering at home began in Los Angeles, a crew of ambitious Angelenos didn’t let gym closures stop their workouts. #100miles30days spread to over 400 participants around the world. It didn’t matter how you split up the distance; you just had to walk or run 100 miles in April. While a lot of fitness culture hashtags rely on gimmickry, this challenge was social media at its best.

Exercise is always important, especially during a time when isolation negatively impacts mental health. Initiatives like the above keep individuals motivated while the term “community” temporarily loses meaning. A workout partner or group fitness class holds you accountable. Some people need responsibility to keep moving, even if one as simple as a hashtag.

Whether you work out in a group or by yourself, movement is necessary. Reams of research detail the importance of regular exercise. Besides physical health, staying fit leads to good mental health. A year-long study at UT Southwestern again confirms this fact.

Published in The Journal of Alzheimer’s Disease, 30 volunteers (median age: 66) either ran or stretched for 25-30 minutes three times a week. Each participant had no recent experience with exercise. Every volunteer showed some sign of memory impairment, which was a requirement, as this was a study on memory.

The stretch group performed a series of flexibility and balance exercises designed to keep their heart rate stable while strengthening their upper and lower bodies. The cardiovascular group completed a number of heart-raising exercises. After a year of continuous exercise, researchers measured cerebral blood flow in each participant. 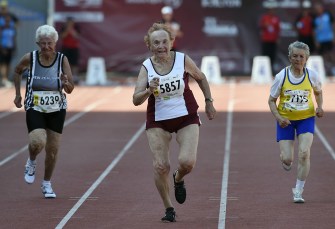 As lead author of the study, Binu Thomas, a postdoctoral research fellow in the Center for BrainHealth at UT Southwestern Medical Center, says, aerobic exercise works in your favor at any age. Noting the study was only a small group, he continues,

“Cerebral blood flow is a part of the puzzle, and we need to continue piecing it together. But we’ve seen enough data to know that starting a fitness program can have lifelong benefits for our brains as well as our hearts.”

This study follows a wealth of data detailing the impact of exercise on cognition. A University of Vermont study suggests mental health patients consider exercise before starting prescription medication, going so far as to recommend medical centers build gyms in a new therapeutic model.

A prior review of 33 studies advocated weightlifting as an important protocol for curbing depression. Another study based in Amsterdam called exercise an ideal intervention for treating anxiety disorders and depression. Oxford and Yale researchers discovered the same.

In 2013, the RAND Corporation estimated that diseases of dementia cost America between $157 billion to $215 billion annually. Previous research specifically cites cardiovascular exercise as key for fighting dementia, including this 2010 study and this study from 2017. In 2013, epidemiologist Bryan James told NPR that aging does not have to result in memory loss.

“It’s simply not pre-destined for all human beings. Lots of people live into their 90s and even 100s with no symptoms of dementia.”

While Thomas speculates that a drug could target blood flow in the regions cited in his study, perhaps we should consider what’s kept us healthy for hundreds of thousands of years: regular movement. Your body is in the shape you train for, so best to train it well. Your brain will thank you.

When we are more focused on the good things we enjoy in life, we have more to live for.
Up Next
Starts With A Bang

Ask Ethan: Have We Finally Found Evidence For A Parallel Universe?

We can imagine a very large number of possible outcomes that could have resulted from the conditions our Universe was born with. The fact that all 10⁹⁰ particles contained within […]