Now that Apple is cutting production on iPhones, the company, seeking other revenue streams, recently announced that it will focus on health initiatives, especially through its watch. Interestingly, the move is in part inspired by “Dear Tim” letters that the CEO, Tim Cook, receives from Apple users, many of whom shared anecdotes about how the watch saved their life.

Apple isn’t the only company expanding into health care. Samsung is adding a “health-focused smartwatch” to its catalog; mental health models for warning about potential suicide risks are in the works.

It’s a fascinating turn of events for an industry that has in large part created many of the health problems we’re experiencing. Increased rates of anxiety and depression can be directly traced to smartphone addiction. Distracted driving is a public health crisis, causing 1.6 million automobile crashes and 390,000 injuries per year. Add to this constant inattention, privacy invasion through data collection, and political problems fostered by social media and it seems like the tracking device in our pockets is of little benefit.

Yet the cure often lies close to the disease, as an old sentiment in mythology goes. It makes sense that the device causing so many problems will play a role in reversing course. That’s exactly what new research from the University of Buffalo claims.

The extraordinary effect of mindfulness on depression and anxiety | Daniel Goleman

The extraordinary effect of mindfulness on depression and anxiety | Daniel Goleman

Assistant professor of psychology, Kristin Gainey, has focused on mood and anxiety disorders for decades. Current models for detecting mental health problems are not reliable and certainly not specific. The course of treatment, which has predominantly been SSRIs for over thirty years, often causes more problems than it helps. Gainey believes smartphone tracking provides real-time information that proves more valuable for diagnosing and addressing these issues.

Studies, she says, tend to focus on comparative data: this many people suffer this compared to that segment of the population. By contrast, clinicians want to help the individual in front of them, not the entirety of a culture. Yet given the fact that research focuses on comparisons, patients are treated with a herd mentality. This is how the health care system is designed. Why see one patient for an hour of talk therapy when you can see a dozen, each of whom receives a script so that you can escort them through the door as quickly as possible? Scalability and healing do not make good bedfellows.

This approach simply isn’t working. Gainey believes that only by identifying harmful patterns as they occur will progress be made. She continues,

[Clinicians] want to understand how to change the emotional experiences of a given individual over time and across different situations. The only way to get at that directly is to measure these processes repeatedly within a person as they’re happening.

Gainey recruited 135 volunteers for her study. Over a ten-week period, each one received surveys three times a day and were required to reply within twenty minutes of receiving. This way, Gainey could track their emotional states as they were moving about their day, a much more reliable indicator of pain points than seeing a therapist once a week for a debriefing.

Smartphones, as noted above, create many emotional problems. By design humans are intricately wired into our environment. When we don’t pay attention to external cues, but instead are focused on whatever is happening on our phone, the disconnect from our surroundings increases levels of adrenaline and cortisol. We’re basically always on edge, awaiting the next digital transmission instead of observing and engaging with in good ol’ analog life. 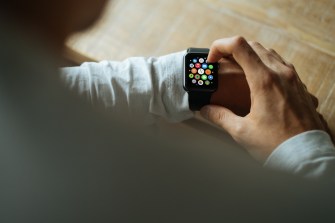 When we’re constantly secreting stress hormones we’re always going to feel on edge, never quite relaxing into the space we’re in. A therapist’s office might well become a place of refuge; we know it’s safe to discuss personal details that we often avoid though distraction technologies. And so our mindset will be qualitatively different when entering a space reserved for healing.

Not so in real life, which is why Gainey’s study is brilliantly designed. Sure, receiving an alert three times a day is distracting, but with an ultimately beneficial goal in mind: to pinpoint triggers encountered in the course of your day that make you anxious and depressed. Through this observation you can recognize daily rhythms throwing you off. Empowered with this knowledge, you can work on changing damaging habits. As Gainey notes,

We can’t always remember accurately how we felt days and weeks ago, especially if there were some days you felt really bad and other days you felt great. That’s not easy to summarize in a single index.

While anxiety and depression are indeed individual, humans are connected to their society as much as their environment. A severe loss of meaning plagues Western culture, one which would take books to detail, not a single article. That said, our devices are playing no small role in keeping us away, as Robert Lustig writes in Hacking of the American Mind, from the contentment offered by serotonin. Addicted to the immediate rush of dopamine, we choose quick rewards over the healthier consequences of sustained concentration, and we’re paying the price.

Can the smartphone be the cure for the disease of smartphones? There are more layers to unravel than that. Gainey’s thoughtful experiment offers one layer for further exploration.

Data from NASA, ESA, and Roscosmos suggest that long durations in space cause changes in the brain, some of which are linked to vision problems.
Up Next
Health

Harvard: Men who can do 40 pushups have a ‘significantly’ lower risk of heart disease

Turns out pushups are more telling than treadmill tests when it comes to cardiovascular health.