Quantifying workouts feeds our love for both math and goal-setting. While elite powerlifters aim at incremental increases that will award them the coveted one repetition at maximum weight, most mortals choose easily digestible numbers like five or 10 to complete a set. Or, if you’re starting a Pilates routine, the Hundred is a powerful warm-up.

A six-minute mile. Ten pull-ups. And now, for men at least, add forty pushups to that list.

That’s the number that’s been floating around since a new study from the Department of Environmental Health at Harvard T.H. Chan School of Public Health was published in JAMA Network Open. The result is stark: men who can pump out 40 pushups in one minute reduce their risk of cardiovascular disease by 96 percent over men who cannot perform ten pushups in the same timeframe.

First author, Justin Yang, an occupational medicine resident at Harvard, sums it up:

Treadmill tests, the authors note, can be expensive. If you’ve ever seen those Bane-type masks worn by fellow gym members, trainers are testing for VO2 max, how much oxygen is being consumed as your workout increases in intensity. Cardiorespiratory fitness is a prime indicator of life expectancy. Becoming winded walking up a single flight of stairs is not a good sign for longevity.

Fortunately we’re resilient animals; we can train our cardiovascular system at any age. There are any number of exercises that will increase your output: running, jogging, walking, of course, but also any of the variety of movements falling under HIIT (high-intensity interval training) and HISS (high-intensity steady state) formats, such as jumping jacks, burpees, cycling springs, tabatas, the list is practically endless. 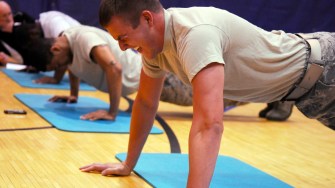 Master Sgt. Jesse Lawhorn, 49th Maintenance Squadron, completes 289 push-ups during the annual Push up-a-thon held at the Domenici Fitness and Sports Center here Dec. 11. Sergeant Lawhorn won the category for having the most push-ups for males over the age of 30. (U.S. Air Force photo by Airman 1st Class Veronica Stamps)

Pushups also fall into the cardiovascular domain, even though they appear to be more about strength-building (the two can work together), especially when performing a timed workout. Forty pushups in one minute equals one every 1.5 seconds, which doesn’t seem like a lot when doing 10, but the final sprint between 30 and 40 will result in plenty of huffing and puffing (depending on fitness level, of course).

For this study, researchers looked at data from 1,104 active male firefighters over a 10-year period. The average age was 39.6 with an average BMI of 28.7. Over that decade a total of 37 cardiovascular disease-related incidents were recorded. More than the treadmill test, pushups seemed to indicate a higher likelihood of falling victim to heart problems.

There are a few things to unpack from this study. First, firefighting is an occupation that requires a certain level of physical fitness, especially when it comes to cardiovascular health given the dangers on their job description (running to the scene, quick nervous system activation, smoke inhalation). Chances these men are in better shape than the average population are high. That means men outside of this age range and that are generally less active might have a different benchmark.

Secondly, this may or may not apply to women — their marker of heart health might require testing another exercise, given that their center of gravity is generally lower than males, making pushups more challenging in at least part of the population. Obviously, persistent training in both genders changes statistics; many women can outperform plenty of men in pushups and other traditionally “male” workouts. As a big-picture snapshot, though, pushups tend to be a male pastime.

Dr. Stefanos N. Kales, who co-authored the study at Harvard, notes that the general parameters should be understood, not necessarily the specifics:

50 Push Ups in a Row | Workout for Beginners

50 Push Ups in a Row | Workout for Beginners

That said, pushups are one of the most fundamental exercises imaginable. It is the primary example of one of our four basic movements: pushing, pulling, jumping, and squatting. Being able to press your body off the ground is an important indicator of controlling your bodyweight.

There is an incredible range of pushups as well: in yoga, chaturangas, where your elbows are tight into your body; other tricep-oriented pushups, such as hands placed closely together; one-handed pushups; plank pikes, shoulder pushups; planches; knees-down. The varieties are endless.

In 15 years of teaching a variety of group fitness classes, I’m a fan of the pushup demonstrated in the video above for beginners. A proper pushup requires your entire body, not just your arms. Notice in the video his elbows are bent at a 45 degree angle as he lowers and lifts; his legs are engaged and straight; his upper back is not in extreme flexion, as often happens when one is still building upper body strength; perhaps most importantly, his head is in alignment with the rest of his body.

The most common mistake I witness is people dropping their head, gazing back under the chest rather than a few inches in front of their nose. The human head, on average, weights 12 to 14 pounds. Where your gaze goes matters. Drop your head even a few inches and you’re guaranteeing that your upper back will move into excessive flexion, causing the “rounded shoulders” problem many encounter while pushing up. Add to this a lack of core and leg engagement and the entire exercise seems futile.

But it shouldn’t be. As with pull-ups — a less commonly employed exercise with equally important benefits — your strength will increase quickly with regular practice. As the researchers note, 40 is a solid goal, but men who perform in the 10s and 20s still decreased their risk of heart problems. Even though this might not be the marker for women, learning how to control and master your body is never detrimental (provided you don’t have shoulder or wrist injuries). As with any exercise, proceed with caution, but most importantly, proceed.

The human brain makes a striking deviation from the normal building plan.
The Future

Some of the most popular “anti-aging” diets show promise in rodent studies. But are they effective for humans?
Up Next
Starts With A Bang

Starts With A Bang Podcast #41: Before The First Stars

The LOFAR array can capture light from the 21cm emission line: corresponding to light emitted from neutral, isolated hydrogen atoms that don’t even need to be bound together into stars. […]