It has become commonplace to see a "worm" based on the reactions of a tiny sample of audience members running across our screens during televised presidential debates. Psychologists tested whether the worm can influence our voting intentions and the results are worrying in the extreme. 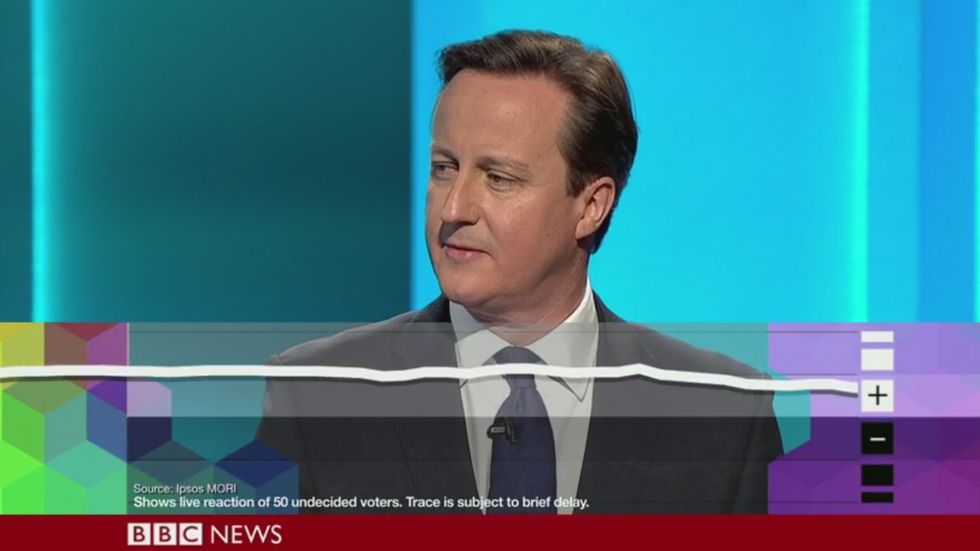 In 1951, Solomon Asch conducted an experiment that changed the way we think about conformity. By placing a naive individual in a room with seven confederates who were all actors, Asch manipulated the majority of participants into stating at least once that the line (on the left, below) was not the same length as a line (on the right), that it absolutely, indisputably, blindingly obviously, is.

Fast-forward over half a century, and it could be possible that today you are being manipulated in a way not dissimilar to the subjects in Asch's experiment, but which would have far more severe consequences.

It has become commonplace before an election for the leaders of political parties to hold public televised debates. Across the television screen, we may now expect to see a line, dubbed "the worm," which typically represents the live responses of a very small sample of undecided voters to what is being said on screen. In the recent leaders' debates in the run-up to the UK general election, the worm's sample consisted of 50 undecided voters; in the US in the 2008 Presidential debates CNN's worm was formed using a sample of only 30 voters. This contrasts to thousands of respondents used in traditional political polling. The worm has also been adopted in New Zealand and Australia.

"So what?" you might say. Surely something as serious and complex as your voting choices isn't vulnerable to manipulation by something as simple and arbitrary as a line on a television screen, constructed by a few faceless individuals whom you've never met. This exact premise was tested exquisitely in a 2011 study by Colin Davis, Jeffrey Bowers, and Amina Memon and the results are as fascinating as they are shocking.

The researchers had two groups of 75 students watch live broadcasts (in real time for added realism) of the 2010 UK electoral debates. Without the knowledge of the students, Davis secretly manipulated the worm seen by the students in real time. For one group, whenever the then-Labour leader Gordon Brown spoke, Davis commanded the secretly superimposed worm to respond in his favor with the push of a button. For the other group, whenever the Liberal Democrat leader Nick Clegg spoke, the worm was manipulated in his favor instead.

The students were led to believe the experiment was about memory and were asked questions including: "Putting aside your own party preferences, which party leader do you think ‘won’ this debate?" and which candidate would be their preferred prime minister. Just like in Asch's study, the students conformed to join the group, except in this case the "group" was simply a horizontal line on a screen.

The extent of the effect of the manipulation didn't end at who the students thought had won the debate. The student's preferred choice of prime minister was similarly swung substantially in the direction of the manipulation. The worm manipulation even had a powerful effect on students who claimed they disagreed with the worm's verdict.

This research was not the first time the worm has been demonstrated to have a worrying effect. A paper published in 2007 found that people watching recordings of the 1984 US Presidential debates could be manipulated through the use of a biased worm into saying they'd have voted for either Walter Mondale or Ronald Reagan. In 2010, during the UK general election leaders' debates, The Guardian newspaper accused the Liberal Democrats of trying to manipulate their independent worm by submitting masses of votes which were identified as originating from "Lib Dem HQ":

In a talk last week in Bristol in the UK, lead researcher Davis argued that the worm has such a powerful effect on our perceptions that it should be abolished outright. Personally, I find the worm, and what it represents, can be almost (if not far more) interesting than the contents of the debates themselves — so I'd be sorry to see it go. If it were based on a sufficiently large and balanced sample, it represents a fascinating insight into the attitudes of the population we live in, which I personally believe can provide useful and important genuine democratic feedback to politicians, with a higher degree of finesse than the blunt instrument that is the vote currently allows.

What we can all agree on, however, is that the use of the worm in its current form is extremely problematic. It would only take a chance extremist-heavy sample of voters to swing the worm, which could manipulate the whole population en masse. This alone should be cause for concern; no one wants to see our elections swung by the whims of a random handful of undecided voters in a television studio. In a world where media companies are unabashed about their intentions to influence elections, placing the control of something as powerful as the worm into the hands of media companies is nothing short of idiotic. The risk is not that Rupert Murdoch is secretly pulling a Colin Davis and manipulating the worm from his basement. All it would take to manipulate a worm formed from only a few dozen audience members is a slightly skewed selection process. As Bowers, one of the study's co-authors explains:

“Given the small sample of undecided voters that generate the worm, just one or two persons could influence the worm by voting for one candidate no matter what. The system is cute, but open to abuse.”

The fact that something as simple as the selection of a smattering of button-pushing studio audience members could influence how we all vote should make us very worried. That something as demonstrably influential as the worm is based on such absurdly tiny sample sizes as 30 in the United States and 50 in the United Kingdom is nothing short of scandalous.