A box of crackers features the tagline, “Conscious eating.” An artistic subgroup embraces the Burning Man ethos: “Conscious music.” This self-declared genre arises from the same set that talks about techniques for “higher consciousness.” In every instance, the sentiment is obvious: my product is better than yours because there’s something deeper going on over here.

Consciousness, from their perspective, is like a ladder descending into an unfathomable abyss. This depth can be penetrated, through meditation, through breathing exercises or austerities, through faith or sheer willpower or a combination of the two, or through, apparently, eating crackers. For some, higher consciousness is handed down at birth, from a past life, or bestowed by a teacher, as in the Indian idea of shaktipat. Whatever the method, everyday consciousness only scratches the surface. Something deeper exists, waiting to be mined by the steadfast observer.

A deep sigh of relief washed over me when reading that Nick Chater called the notion of higher consciousness “nonsense on stilts.” The British behavioral scientist doesn’t mince words in his new book, The Mind is Flat. While many believe consciousness to be a hidden mystery few can access, Chater’s take on this evolutionary phenomenon is quite pedestrian. What you see is effectively what you get.

No amount of therapy, dream analysis, word association, experiment or brain-scanning can recover a person’s ‘true motives,’ not because they are difficult to find, but because there is nothing to find. The inner, mental world, and the beliefs, motives, and fears it is supposed to contain is, itself, a work of the imagination.

This is not shocking if you consider consciousness in its most fundamental regard. By definition, consciousness is simply what you’re paying attention to at the moment, which can amount to no more than four or five things. You can refine from there: the goal of meditation, for example, is to focus on one thing—a mantra, a candle flame, your breathing, something basic and accessible. Whether you’re an expert meditator or chronic multitasker, the effects on consciousness are physiological, not mystical.

Yet that’s not how we feel, which is why Chater’s book is likely to rattle many mental cages. An emotion, he says, is an interpretation of a physiological change in your body. He’s not the first thinker to posit this; Lisa Feldman Barrett wrote an entire book on this topic. While this will not square well with those who claim they know something to be true because they feel it, Chater’s point should not be dismissed. Anecdotal interpretations have the habit of often being wrong.

We actually have a limited set of feelings. Think about the innumerable issues that cause a stomach to churn. Context matters, and in this sense, our brain contextualizes the physical sensations based on past experiences. Memory is fluid but based on prior events. Essentially, Chater states that we’re just making it all up as we go along.

We crave narrative and go to great lengths to fill in incomplete stories regardless of the validity of assumptions being made. This is why Chater thinks the role of psychotherapy is dated. He calls the Jungian notion of a collective unconscious “the astrology of psychology,” rather fitting given that Jung speculated that UFOs are psychic projections from our hidden collective drive. To Chater, comparing Jungian analysis to psychology is akin to relating astrology to astronomy. One exploits patterns of thought and behavior in an attempt to derive coherence, while the other relies on data to pinpoint exact locations and predictable patterns.

Chater believes psychotherapy feeds the illusion of a hidden depth and claims the industry is on the outs.

[Psychotherapy is] doomed by the fact that there is not a deep inner story that is hiding from you. Rather, you’ve got the first draft or a set of incoherent notes for a novel. You’ve got an incoherent muddle. And we’re all incoherent muddles to some degree. But when some of those incoherencies cause us problems, when we’re terrified of something we very much want to do, even something as narrow as a fear of spiders, these are conflicts in our thinking and reactions.

In his latest book, The Strange Order of Things, neuroscientist Antonio Damasio writes that feelings are “for” life regulation. They provide essential information to help us remain in homeostasis. If something is out of whack a feeling lets us know. Again, context matters. Our stomach gets jittery if we’ve eaten something rotten and when we’re courting a romantic partner. As Damasio states, feelings alert us to potential danger as well as potential opportunity. There is nothing metaphysical about the process. 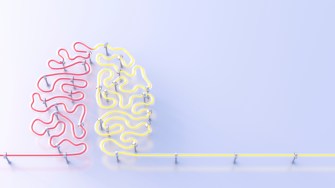 But we perceive it to be other, as Chater writes. Instead of a perception refined by years of experiences, we come to feel that the deep well of the unconscious is simmering below the surface, like the famed kundalini energy at the base of the spine. Hyperventilate enough and you unleash its fury. Well, true, Chater might say—hyperventilate enough and your nervous system is certainly going to react in peculiar and dangerous ways.

Does this make psychotherapy useless? Not so fast, Chater concludes. First off, talking to another is proven medicine. Chater also says creativity is an important aspect of our humanity. Ingenious solutions can be worked out between a therapist and patient, provided it’s understood as a metaphor. His contention seems to be assuming metaphor to represent reality as stated. Constructing new patterns of thought and behavior has therapeutic utility; uncovering unconscious motives or beliefs is not only counterproductive but dangerous:

The reason I think the unconscious is a dangerous metaphor is because it gives you the impression that mental things that are unconscious could be conscious. This whole idea of uncovering things from the unconscious and making them conscious has the presupposition that they are of the same type.

He compares this yearning for a hidden depth to Freud’s iceberg: consciousness at the top, the real story under the surface, which Chater says is a mistaken analysis of how our brains actually work.

What is unconscious can never be made conscious because the information is inaccessible by design. I’ll never be conscious of my liver detoxifying my blood, but if something goes wrong in that process I’ll certainly feel the result. If the unconscious could be made conscious, we’d never need a doctor to diagnose an illness; our body would tell us.

We’re just not as deep as we think, which is fine: we have plenty of work to do on the surface. Perhaps if we stop taking so many metaphors as reality, we’d get along much better, with ourselves and those around us. There’s plenty to see when we open our eyes. Closing them to seek a treasure causes us to miss the treasure right before us.

In terms of the planets we’ve discovered, super-Earths are by far the most common. What does that mean for the Universe?
Up Next
Politics & Current Affairs

Invasive species: How the tegu lizard could invade the South

With the tegu’s successful occupation of Florida’s ecosystems, a new study predicts that this invasive species could potentially spread across the southern U.S. and into Mexico. But these voracious lizards are just another incident in our devastating history of invasive species.