Given the importance of time in running our lives, we don’t really know enough about its ultimate nature. Is it a construct of our mind? Or is it something that is an absolute effect of nature that is independent of our perception of it? Now researchers at the Kavli Institute for Systems Neuroscience in Norway took our understanding of time’s mysteries a big step further. They discovered a network of brain cells that maintains the brain’s sense of time by stamping our experiences and memories.

This network is located in the lateral entorhinal cortex (LEC) and functions as a neural clock that takes the flow of happenings and arranges them in a sequence of events.

While other kinds of biological clocks like the circadian clock or the hippocampal time cells have been identified by scientists previously, the Kavli Institute team believes the neural clock it discovered keeps track of subjective time during experiences.

The study’s author, the Nobel laureate Edvard Moser, who is also the director of the Kavli Institute, explained that “this network provides timestamps for events and keeps track of the order of events within an experience.”

The team that also included Albert Tsao found a clear time-coding signal coming from deep in the brain which they first couldn’t identify until they realized the signal fluctuates with time.

“Our study reveals how the brain makes sense of time as an event is experienced,” explained Tsao. “The network does not explicitly encode time. What we measure is rather a subjective time derived from the ongoing flow of experience.”

The researchers from the Kavli Institute, which is based at the Norwegian University of Science and Technology (NTNU), used a rat to look into the network. They tracked the signals in the rat’s brain during various activities. These involved having the rat navigating a maze which was either littered with chocolate or the chocolate was used as a bait for the mouse to follow. The scientists found that the rat exhibited “a unique time signal,” keeping a good record of time during its laps through the maze. 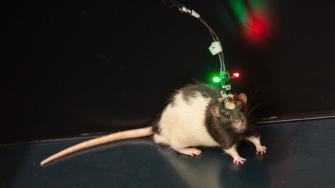 Interestingly, the location of the neural clock in the LEC is next to the MEC (medial entorhinal cortex) – the area of the brain that is responsible for coding for space. This fact makes the region ripe for further inquiry that may lead to new medical treatments as both time and space are affected in the first stages of Alzheimer’s.

Another big takeaway from the find is that our sense of time is both linear like a river that flows constantly and cyclical like a helix. The nature of the experience that the person is undergoing shapes the signal sent to the time-coding network. Professor Moser thinks the study illustrates the fact that if you want to alter the way you perceive time, you just need to change what you are doing, switching out the content of the experience.

Moser predicts that the discovery can lead to new avenues for study, stating “With this work, we have found an area with activity so strongly relating to the time of an event or experience, it may open up a whole new research field.”

Check out the full study published in Nature magazine.

LEGO folks built an actual, full-sized replica of the Bugatti Chiron—and drove it. What’s next, a Mars rover?