Do plants have feelings? Not in a poetic, metaphorical sort of way but real feelings? Can they hate, love, or be bored? If you go around plucking flowers or mowing grass down with your lawnmower, are you causing these organisms pain? A rising field of plant neurobiology may answer these provocative questions.

This area of study was perhaps jolted into existence by the series of experiments carried out in 1966 by a former C.I.A. polygraph expert named Cleve Backster. He was, in turn, inspired by the work physicist Jagadish Chandra Bose, who found that playing different kinds of music near plants made them grow faster

Backster hooked up a galvanometer to a houseplant and found that the plant’s varying electrical activity seemed to correspond to the thoughts from Backster and his colleagues. The experiment appeared to show that the plants reacted to whether the thoughts were positive or negative.

In one such trial, written up in the International Journal of Parapsychology in 1968, Backster’s team connected plants to polygraph machines and found that a plant that saw someone stomping on another plant, essentially killing it, could pick out this “killer” out of a lineup. It registered a surge of electrical activity then this person appeared before it. 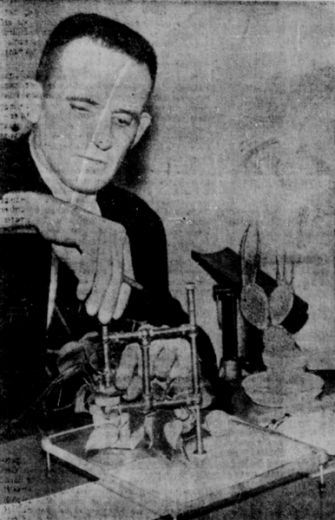 Cleve Backster using a lie detector on a household philodendron. 1969.

While Backster’s findings were not duplicated by others, especially as he went on to find plants communicating telepathically, the area of study got a further boost in a 2006 paper published in Trends in Plant Science, where a team of biologists argued that the behavior you can see in a plant are not just a product of genetic and biochemical processes.

The authors, who included Eric D. Brenner, an American plant molecular biologist, Stefano Mancuso, an Italian plant physiologist, František Baluška, a Slovak cell biologist, and Elizabeth Van Volkenburgh, an American plant biologist, declared that a new field of plant neurobiology must be born to further understand plants. This area of biology research “aims to understand how plants process the information they obtain from their environment to develop, prosper and reproduce optimally,” wrote the scientists.

They explained their observations that plants show behaviors that are coordinated by some type of “integrated signaling, communication and response system” within each plant. As profiled by Michael Pollan in the The New Yorker, these behaviors include responding to numerous environmental variables, such as light, temperature, water, microbes, and soil components like nutrients and toxins, and even gravity.

What’s more, the plants utilize electrical signal and produce chemicals similar to neurons in animals, allowing them to respond to other plants. This led the authors to propose that plants exhibit intelligence, allowing them to react to their environment for both present and future actions.

In fact, studies showed that plants evolved to have between 15 and 20 separate senses including the human-like abilities to smell, taste, sight, touch and hear.

Does that mean plants, which compose 80 percent of the biomass on Earth, have complex nervous systems or even brains?

Maybe not brains like we understand them but intelligence. While brains are useful for problem solving and complex tasks, they are not the only way for organisms to interact with their environments. Humans tends to overestimate the relative greatness of their brains and faculties.

Stefano Mancuso, who was involved in the 2006 paper and runs the International Laboratory of Plant Neurobiology near Florence, Italy, contends that plants think, just differently, utilizing distributed intelligence. They gather information from their environments and respond in ways that are good for the whole organism. They also communicate, having 3,000 chemicals in their “chemical vocabulary”.

Check out this TEDx talk with Stefano Mancuso

Many plant scientists over the years have pushed back against the field. One of its most ardent critics has been Lincoln Taiz, a now-retired professor of plant physiology at U.C. Santa Cruz. He believes that plant neurobiology ultimately leads down a slippery slope implying that plants can feel emotions like happiness or pain, can make decisions with purpose and perhaps even have consciousness. Chances of that being true are “effectively nil,” writes Taiz in the recent paper “Plants Neither Possess nor Require Consciousness,” published in the August 2019 issue of Trends in Plant Science.

While plants may exhibit sophisticated behaviors, their nervous systems are not comparable in complexity to those of animals and they have no similar brains, asserts the biologist. In fact, they have no need for consciousness, as it would require expending too much energy for their sun-oriented lifestyles.

He uses the case of a forest fire to point out the horror of what it would mean for plants to have sentience:

“It’s unbearable to even consider the idea that plants would be sentient, conscious beings aware of the fact that they’re being burned to ashes, watching their saplings die in front of them,” writes Taiz.

Indeed, the idea of plants having self-awareness might seem too daunting and not yet supported by enough credible research, but the overall project of the field of plant neurobiology has already challenged the overly human-centric understanding of nature.

Tags
biologybiospherebrainconsciousnessenvironmentintelligenceplantstrees
In this article
biologybiospherebrainconsciousnessenvironmentintelligenceplantstrees
Related
Life
Strange life forms create an “alien” ecosystem in an abandoned uranium mine
Slimy biofilms made up of bacterial and eukaryotic life forms have taken over an abandoned, flooded uranium mine in Germany.
The Present
Climate change is altering the chemistry of wine
Smoke taint from wildfires is gross, even to wine amateurs.
Life
Our antidepressant drugs are affecting animals and ecosystems
A toxicologist explains the impacts of antidepressants on fish — and no, they’re not getting any happier.
Hard Science
200 years of exploring Antarctica
What we’ve learning from the world’s coldest, most forbidding, and most peaceful continent.
Life
Most of the seafloor is a thick graveyard of ooze
Each year, several trillion pounds of microscopic silicon-based skeletons fall down the water column to pile up into siliceous ooze.
Up Next
The Present
Why American towns are more selective than ever about what they recycle
An ecological silver bullet is missing the target altogether.