As evidence keeps mounting in support of the idea that pigs are highly intelligent—and despite some researchers viewing the species merely as a source of organs for human transplant—there’s some compelling new evidence from scientists at the Purdue Center for Animal Welfare Science. Researchers there have taught four pigs to operate joysticks and play a rudimentary video game.

As lead author of a new study describing the research, Candace Croney of Purdue University, says:

“It is no small feat for an animal to grasp the concept that the behavior they are performing is having an effect elsewhere. That pigs can do this to any degree should give us pause as to what else they are capable of learning and how such learning may impact them.”

The study is published in the journal Frontiers in Psychology. 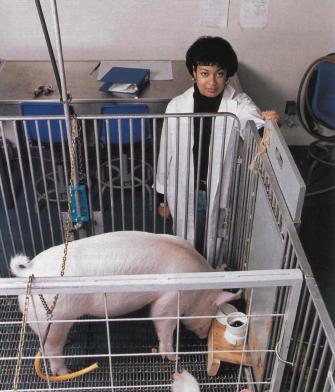 The experiments involved four pigs: Yorkshire pigs named Hamlet and Omelette, and Panepinto micro pigs named Ebony and Ivory. All four were taught to approach and engage a joystick to move an onscreen cursor to a designated target. Doing so got them a non-virtual treat, a dog kibble pellet, delivered to a bowl next to the screen.

All four of the pigs were tested and found to be farsighted, so the monitor was placed 45 cm away from their eyes when they were in position to work the joysticks. During training, they were first taught to approach the joystick with the verbal command “joystick,” followed by a pellet upon success.

The pigs learned that by guiding the cursor to one of the blue walls displayed onscreen, they’d be rewarded with a “bloop” sound, a pellet, and words of encouragement from a nearby human. Varying levels of difficulty were achieved by making either three, two, or one wall bloop-able in different sessions. All of the pigs did well when playing the difficult, one-walled version of the game.

All of the pigs succeeded well above the level expected if they were doing it by chance. And it bears mentioning that, lacking fingers and hands, they had to manipulate their joysticks by mouth — we’ll wait while you try it.

In addition to being able to play this “game” well, the researchers found that the pigs’ performance could be improved with human verbal encouragement. On those occasions when the treat dispenser was turned off, the players could be encouraged verbally or tactilely to keep working the joysticks. The researchers also found that for more difficult tasks, only verbal encouragement seemed able to guide the pigs to success.

“This sort of study is important,” says Croney, “because, as with any sentient beings, how we interact with pigs and what we do to them impacts and matters to them. We therefore have an ethical obligation to understand how pigs acquire information, and what they are capable of learning and remembering because it ultimately has implications for how they perceive their interactions with us and their environments.”

The pigs’ performance did not match the success rate of primates playing similar games, but, again, primates have fingers. The study notes, “Limitations in the joystick methodology suggest that future studies of the cognitive capacities of pigs and other domestic species may benefit from the use of touchscreens or other advanced computer-interfaced technology.”

The researchers had hoped to test their charges’ acumen with symbols, allowing for more direct communication, but the project concluded before such work could be explored.

Croney says, “Informing management practices and improving pig welfare was and still is a major goal, but really, that is secondary to better appreciating the uniqueness of pigs outside of any benefit we can derive from them.”

More than 90% of human faces are home to mites that live in our skin pores. These friendly guests might be merging with us.
Neuropsych

There is no long-term beneficial effect of medication on standardized test scores.
Up Next
Communication

What would it take to create a great place to work for all?

The business case for diversity and inclusion is overwhelming. We know that diverse teams benefit from increased productivity and a wider knowledge base. We know that varied perspectives help us […]