Almost 2,000 years ago, Mount Vesuvius — located on the gulf of what is today Naples in Campania, Italy — erupted, burying the ancient cities of Herculaneum and Pompeii beneath hot ash.

Recently, a team of researchers in Italy discovered the intact brain cells of a young man who died in the disaster in A.D. 79. The team studied remains that were first unearthed in the 1960s from Herculaneum, a city once nestled into the shadow of Mount Vesuvius. The man was around 25 years old when he perished and was discovered lying face-down on a wooden bed in Herculaneum’s Collegium Augustalium (the College of the Augustales), located near the city’s main street. The building was the headquarters of the cult of Emperor Augustus who was worshipped as a deity, a common Roman tradition at the time. 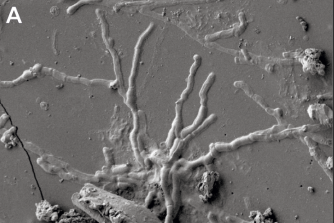 Now, subsequent research has described how the researchers, using an electron microscope, discovered cells in the vitrified brain. According to Petrone they were “incredibly well preserved with a resolution that is impossible to find anywhere else.” Additionally, the team used another method called energy-dispersive X-ray spectroscopy to determine the chemical compounds of the glassy material. The sample was rich in carbon and oxygen, which indicates that it was organic. The researchers compared those ancient proteins to a database of proteins found in the human brain, and found that all of the discovered proteins are indeed present in human brain tissue.

Additionally, Petrone and his team suspect they also discovered vitrified nerve cells in the ancient victim’s spinal cord and cerebellum based on the position of the sample in the mind of the skull and the concentration of the proteins.

These impeccable preservations of brain tissue are unprecedented and will undoubtedly open the door to new and exciting research opportunities on these ancient people and civilizations that weren’t possible until now.

The Italian research team will continue to study the remains to learn more about the vitrification process, including the precise temperatures the victims were exposed to and the cooling rate of the ash. They also, according to Petrone, want to analyze proteins from the remains and their related genes.

Metabolism and mitochondrial functioning seem to have far more to do with mental health than many people might expect.
Up Next
Strange Maps

The horror of the air war, in one stark map

This graph shows how badly German cities were hit by Allied bombing raids.