If we look around in a crowd in any great metropolis we’ll often notice, visually at least, great diversity amongst our species. Our facial features, height, weight, hair and eye color, skin color, bone structure, and style vary considerably. Yet, on a genetic level, there is surprisingly little diversity among humans.

Dr. Barry Starr is a geneticist-in-residence at The Tech Museum of Innovation in San Jose, California, and also works at Stanford. Dr. Starr says there’s more genetic diversity among chimpanzees of the same troop than of any two humans.

One study takes this even further. It found that common wheat had more genetic diversity than humans do. It almost sounds insulting. This comparison was arrived at through the work of Nicholas Rossi, a PhD candidate at Boston University. He came up with a certain metric, an equation, to evaluate the genetic diversity present within a species and then compare it with others. So what is genetic diversity and why is it important?

Biodiversity is the different kinds of organisms living in a certain area or a particular ecosystem. This includes fungi, plants, animals, and more. One way to evaluate biodiversity is to just count how many organisms live in a given place. A second and perhaps more precise method, which scientists are relying on more and more, is genetic diversity. 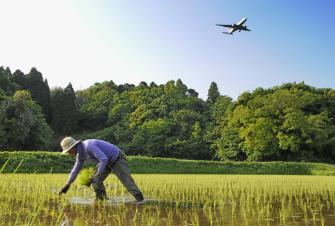 Rice has more genes in total than we humans do. Getty Images.

Shockingly, humans have far fewer genes than many species. We have around 25,000 total. Rice has over 56,000 genes. Some species out there have as many as 400,000! Greater genetic diversity means better defenses against disease, and greater adaptability which helps an organism deal with things such as sudden environmental changes. What’s more, greater biodiversity among the different species of an ecosystem makes that system stronger and more dynamic in the face of sudden change.

On the other end, a low diversity makes a species fragile. Rossi concludes, “Domestic wheat seems more ready than us to withstand the apocalypse.” So why is there a lack of genetic diversity among our species?

According to Dr. Star, one possibility is that a devastating event in humanity’s past nearly wiped us out, leaving few survivors to repopulate our species. Dr. Starr points to Toba, the super-volcano in Indonesia which erupted 75,000 years ago. It had 3,000 times more explosive power than Mount St. Helens. Toba’s eruption in total force was about one billion tons of dynamite.

This eruption blocked out the sun for five or six years, launching another Ice Age. There are other experts who suggest it wasn’t Toba at all, but an epidemic which caused our population to suddenly dwindle. Whatever it was, it is thought that humans were whittled down to only 1,000-10,000 breeding couples, which accounts for the lack of genetic diversity among our species.

To learn more about the genetic situation with our species, click here:

A company plans to transform the world’s most arid region by bringing icebergs from Antarctica.