Ancient Earth was a better home for rhinoceroses than today’s. After emerging in North America or Eurasia about 55 million years ago, the herbivorous mammals went on to radiate into more than 100 species that roamed Eurasia, North and Central America, and Africa.

Some were quite different from modern species. Hyracodontidae, for example, were a family of hornless rhinos that looked like muscular horses. Metamynodon rhinos seemed to spend much of their time in the water, like hippos. And then there was Paraceratherium, which at 23 feet tall and 33,000 pounds, was one of the largest land mammals to ever walk the planet.

But by the time the Pleistocene epoch began some 2.5 million years ago, the majority of rhinos had gone extinct. By the end of the Pleistocene, about 11,700 years ago, only nine rhino species had survived. Today five species remain, and all are endangered.

Scientists have a decent understanding of why the more recent rhinos went extinct — likely a combination of pre-industrial climate change and poaching. But what has long puzzled biologists is the evolutionary lineage of rhinos.

Since the time of Charles Darwin, there has been debate over how the existing species of rhinos are related to their recently deceased relatives. Biologists have proposed several hypotheses for the lineage of recent rhinos, centering on different factors like geography or horn characteristics. That debate now seems settled.

The evolutionary history of rhinos

The goal was to compare the genomes of living species with recently extinct species in order to establish their evolutionary lineage. The results showed that a divergence occurred among rhinos about 16 million years ago, leading them to evolve into two distinct lineages on the African and Eurasian continents. This geographically based split helped shape the evolution of the rhinos still alive today. 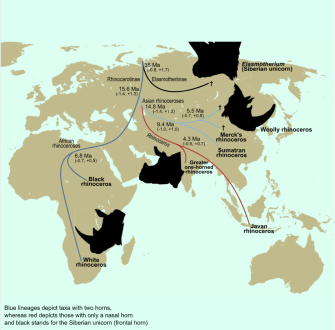 The researchers suggested that the formation of the Gomphotherium land bridge, which connected Africa and Eurasia about 19 million years ago, might have facilitated their ancestral divergence.

“We hypothesize that this land bridge enabled dispersal events followed by vicariance, as is well documented with the immigration into Africa from Eurasia of early rhinocerotids, giraffids, suids, and viverrids and the emigration from Africa to Eurasia of apes, deinotheres, and elephantoids, among others,” they wrote.

The results also shed light on biological diversity among rhinos. Although rhinos were once biologically diverse, the surviving species are remarkable for their low genetic diversity. The study found that this lack of diversity is not exactly new: rhino populations seem to have been slowly but steadily declining over the past two million years.

“This may be positive news for conservation, since it implies that recent declines may have had less impact on the genetic aspects of population viability than previously thought,” the researchers wrote.

“A major priority for rhinoceros conservation will be to halt illegal poaching and ensure that there is sufficient carrying capacity for population recovery,” the researchers concluded.

Tags
animalsbiologyevolutiongenetics
In this article
animalsbiologyevolutiongenetics
Related
Life
Our antidepressant drugs are affecting animals and ecosystems
A toxicologist explains the impacts of antidepressants on fish — and no, they’re not getting any happier.
Thinking
Visual thinking: How to understand the inner lives of animals
Humans are good visual thinkers, too, but we tend to privilege verbal thinking.
Life
Scientists use CRISPR to insert an alligator gene into a catfish
Disease kills off 40% of farmed catfish. This gene protects them.
13.8
Why the origin of life and the Universe itself might be forever unknowable
There might be a hard limit to our knowledge of the Universe.
Hard Science
200 years of exploring Antarctica
What we’ve learning from the world’s coldest, most forbidding, and most peaceful continent.
Up Next
The Present
AI avatars bring deepfakes to the business world
Deepfakes featuring your digital double could replace emails and zoom presentations.