What do you do if your nation has a severe water shortage and happens to be located in a bona fide desert? If you have the resources, you turn to technology, which is what a company in the oil-rich United Arab Emirates is looking to do. The country, which gets less than four inches of rain per year, could solve its issue with water scarcity by towing icebergs from Antarctica to its shores. The first such attempt will begin in 2018.

The idea is actually made possible by global warming. The Antarctic ice sheet is the single largest block of ice on Earth, containing over 60% of the world’s fresh seawater. We are talking about ten thousand trillion tons of snow and ice. As icebergs break off from the ice shelf due to rising temperatures, they drift away and eventually melt, wasting up to 20 billion gallons of fresh water per iceberg which could satisfy the needs of an estimated one million people over five years. The UAE could put this water to good use, transforming its country.

How would the monumental task of towing icebergs from Antarctica be accomplished? It could take up to a year to bring them to Fujairah, one of seven emirates that make up UAE.

Check out the video simulation here:

Once the iceberg is at UAE shores, the ice above the waterline would be chipped off, crushed into drinking water, which would then be stored in large water tanks and filtered. The iceberg would also have a broader impact, says Abdullah Mohammad Sulaiman Al Shehi, the managing director of Abu Dhabi-based firm National Advisor Bureau Limited (NABL) in an interview with Gulf News:

“Cold air gushing out from an iceberg close to the shores of the Arabian Sea would cause a trough and rainstorms across the Arabian Gulf and the southern region of the Arabian Peninsula all year round. As the rising air expands, cools and condenses due to the decrease in air pressure. Water vapour is collected in the clouds, they become heavy and falls as rain.”

The more icebergs, the more water vapor and clouds, creating a profound effect on the regional climate over a decade, turning the desert into “green meadows”.

The melting icebergs would also add fresh water to the Arabian sea, returning biodiversity by balancing out the brine discharge from desalination plants.

There would also be a boost for tourism from all the people interested in looking at the icebergs. 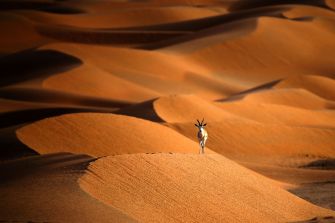 A sand gazelle is seen at the Arabian Oryx Sanctuary in Umm Al-Zamool, some 290 kilometres south of Abu Dhabi near the border with Oman and Saudi Arabia, on March 1, 2016. (Photo credit: KARIM SAHIB/AFP/Getty Images)

The Emirates Iceberg Project comes from a group of efforts by NABL called “Filling the Empty Quarter” which aim to dramatically impact the deserts of the “Empty Quarter” (aka Rub’ al Khali), the planet’s largest contiguous sand desert. The region is also the richest oil-producing area in the world, including parts of Saudi Arabia, Oman, UAE and Yemen. Another such endeavor is the Khalifa River Project, which aims to connect the rivers of Pakistan to the UAE via undersea pipelines.

The company has so far ran simulations and feasibility studies and looks to start the project in early 2018.

They plan to record personality, memory, and body function information, and recreate it.