Dr. Reisman was selected by NASA in 1998. His first mission was aboard the Space Shuttle Endeavour, in 2008, with a 95 day mission aboard the International Space Station. His[…]
Go to Profile 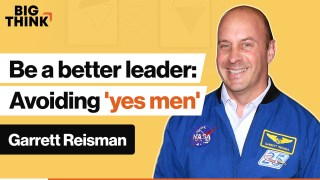 Be a better leader: Knowing the dangers of ‘yes men’

If you're right all the time, you're probably doing something wrong.
▸
4 min
—
with
Garrett Reisman

GARRETT REISMAN: When it comes to leadership there's a trap that you can fall into, especially if you're a very successful leader. If you have a great track record and you've achieved your goal and you're in charge of a big organization, that you could end up surrounding yourself with 'yes men.' Because let's face it, we all like to be told that we're correct, right? Very few people like to be surrounded by people that say no, no, no, no, no, no, no, that's wrong. We all have a tendency to want to be reassured that we're on the right track and that we're smart and that we're good looking. We want to hear nice things. But the problem is that when you're a leader, you can fall into a situation where you have group think or where people, your people who are very smart and especially skilled in certain areas, know better but they're afraid to tell you. And this is especially true if you demonstrate qualities of being vindictive. If you penalize people for speaking out or having a dissenting view. If you come down on them because you think that's causing inefficiencies or slowing you down. Then people really clam up. And this is a very, very dangerous trap for a leader to fall into. So we train to avoid that.

And I think it's extremely important and it really is incumbent upon the leader themselves because this is not going to happen naturally. If the leader exhibits behavior where they come down or penalize people for having contrary views, then very quickly they're going to be quiet, especially if you start firing them and showing them the door. Then the other people are going to get the message and the danger there is that you could blunder into, no matter how smart you are and how well you know what you're doing you're going to make a mistake at some point. And if there's nobody there to tell you, that feels confident in telling you "Hey, just a second boss. Maybe we should rethink this," then that's extremely dangerous. And we trained, when we did our leadership training for our space flight, the example I'll give you was that I was a leader one day. We were out in the deserts of Utah and we had to find a source of water. We were running out of water in the middle of the summer in Utah and that's very dangerous. So we had a map and we knew where there was a source of water and we're following this map and we're using compasses and we're trying to make sure that we're going in the right direction using the landmarks and our map. We didn't have a GPS. That was not part of the exercise. We had to do it the old fashioned way.

I looked at it. I analyzed it. I looked at the map and I said," Okay, I think that mountain over there, that's the one that leads us to the water. But here's what I want you to do...," I turned to the rest of the team that I was in charge of that day and I said, "I want every single one of you to tell me why that is the wrong mountain. Prove to me that I'm wrong. That I picked the wrong one. And if one of you can do that maybe you might save us all." So it turned out that it was the right mountain. I was kind of happy about that, but the point was I empowered my team to tell me I was wrong and we got to that mountain and behind it there was the water and we all lived to tell the tale. It was great.

But what if it wasn't the right mountain and what if the last guy that told me I was wrong I sent packing or insulted them or belittled them, shamed them? How likely would it be that a member of that team would have said, "I don't think that's the right mountain" and saved all of us? I think the odds would be very, very small. So that's a really, really important lesson for a leader, but you have to force yourself to do it because it's not really in our nature as humans to ask people to tell us that we're wrong.

How to lead remote teams, the Navy SEAL way