We all make mistakes. However, acknowledging them can help you overcome the "sunk cost fallacy" and move on. 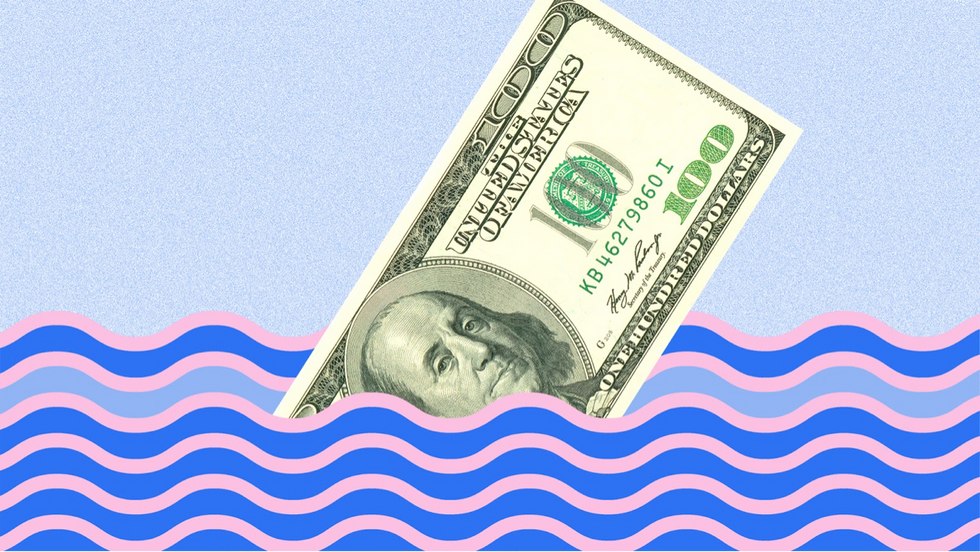 If you leave behind sunk costs and move on, you may just stay afloat. Photo credit: Big Think

Sometimes we do things that make no sense — even if we know, in the long run, the effort involved isn’t worth the reward.

Take, for example, if you bought a $100 concert ticket that was nonrefundable. On the day of the concert, though, there is a blizzard warning — the streets are full of snow, and — the cherry on the cake —you have a cold. No matter the obstacles, you decide to go still — because otherwise, you would have wasted that money. It doesn’t matter that it would be better for your health and safety to stay home — you’ve already invested that money. That is just one example of the "sunk cost fallacy."

The sunk cost fallacy is a commitment to something based on previously invested money, effort or time. We are unwilling to walk away from the choice that we or someone else has made — even if, rationally, we know a different decision could lead to more money or more happiness.

We care about what others invest, too.

We’re willing to continue to invest our time if someone else has invested money in it. Courtesy ForeverJobless.com

In a recent series of experiments, Christopher Y. Olivola found that we also loathe walking away from other people’s investments, as well. The assistant marketing professor at Carnegie Mellon University Tepper School of Business stumbled onto this information while working on his doctorate, and found that everyone from normal people to big corporations fall into the trap.

The experiments utilized Amazon’s Mechanical Turk to ask people a series of questions, and the questions regarding the sunk cost fallacy were hidden amongst other, unrelated questions.

In the first scenario, participants were to imagine that they had front row tickets to a basketball game. A bad storm was coming, and travel to the game could be hazardous, but they couldn’t exchange the tickets. They had to imagine either they or a friend obtained the tickets for free, or either party had to pay $200 for them. In the case of a sunk cost, from either them or a friend, 54 percent of respondents said that they would go. Even if it would be unpleasant due to the weather.Even if it would cause injury, we’re likely to keep doing something if someone else paid a hefty sum for it.

Fifty percent of respondents say they would continue to use a tennis club membership if someone else had paid a significant amount for it, even after they’d been injured and continuing to play would aggravate the injury.

This process repeated itself over and over, with people saying they would choose the outcome least likely to make them happier because someone else had invested in it.

The study participants said they’d eat a whole slice of chocolate amaretto Kahlua cheesecake if someone had spent a lot of money on it and driven far to obtain it, even if they were really full and the cake was sickeningly rich.

In his study, Christopher Y. Olivola found we’re likely to follow in our predecessor’s shoes, even if it could be a mistake.

The sunk cost fallacy doesn’t just apply to interpersonal behaviors, either — even savvy business people fall into its trap. In one scenario, participants imagined they were the president of an airline company that had a $100 million research budget. Ninety-nine million had been invested in projects, and a competitor just came out with a plane that was more fuel efficient, cheaper, and faster than theirs. Participants were in favor of using that money for other projects when that $99 million had been invested in a variety of topics. However, they were much more likely to invest a larger portion of that $1 million that was left (62.68 percent in favor) if their predecessors had invested most the original money into a new plane — even though they knew another firm had already beaten them to a better alternative.

How to turn the ‘sunk cost fallacy’ in your favor

In the study, participants agreed that they would continue watching a movie that someone else had invested money in, even if they didn’t like it.

What we seem to forget, though, is that the person who had made the original investment would be more upset about the fact that we were unhappy than the original sunk cost.

If we can understand the sunk cost fallacy and when it’s playing a role in our decision making, we could reduce unnecessary burdens in our lives. There are some burdens that we commit ourselves to — beyond rationality.

By recognizing that not all costs are worth the following investment, we can move forward. As Julia Galey says, it’s hard to move past our sunken costs, “...because some costs are painful. But at least having the sunk cost fallacy on your radar at least, you have the opportunity to push past that and make the choice instead that will lead toward the better outcome for your future.

When you take the time to recognize that you’re falling into the trap of a sunk cost, it’s time to stop and take stock of the pros and cons of a decision. If the only pro is the emotional investment, then it’s time to abandon that track and make smarter, more rational decisions.