In a way, the ocean’s estimated 5.25 trillion pieces of floating plastic may not even be the worst of it. There’s plastic everywhere in the seas. Big pieces ensnare marine creatures and kill animals that attempt to ingest it. Then there are the tiny bits of plastic — microplastics of less than 5mm in size, such as microbeads in toothpaste and other household products, fibers from clothing, and the remains of degraded larger pieces of plastic.

According to a report published by the U.S. Environmental Protection Agency in 2015, “Slightly more than half of all plastic is negatively buoyant, meaning that it will sink upon reaching the ocean, either into the near-shore sediment environment or to the ocean floor.”

These microplastics are small enough for fish and other sea creatures to eat successfully. But they’re indigestible, and they remain in a fish’s stomach until the animal dies and decomposes, or is itself eaten. Mark Brown first documented this worrying process in 2008. Since then, scientists have wondered if such non-biodegradable bits could be traveling up the food chain, and if so, how far up could they possibly go. Now a recent study provides evidence of such “trophic transfer,” at least as far up as seals. While the study of what otherwise happens to all this microplastic is ongoing, it’s, therefore, a safe bet that humans eventually consume some of it, too. And microplastics are just one relatively trackable category of substances. Their impact on the food chain also serves as a chilling indicator of what’s likely also occurring with deadly persistent organic pollutants, such as dioxins and DDT.

The study by a group of British scientists was published in the journal Environmental Pollution in July 2018. It describes their work with 31 captive seals at the U.K.’s Cornish Seal Sanctuary. The seals were fed Atlantic mackerel caught in the wild. When the seals’ stools were examined, half of them contained plastic fibers around a millimeter long. When researchers examined the stomach contents of other wild Atlantic mackerel, they found similar microplastics in about a third of them.

According to the scientists who conducted the study, “Our findings suggest that trophic transfer represents an indirect, yet potentially major, pathway of microplastic ingestion for any species whose feeding ecology involves the consumption of whole prey.” 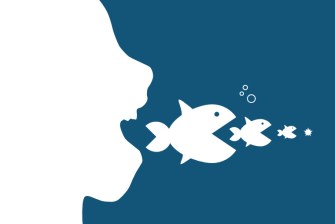 Sjúrður Hammer, who was not involved in the study, tells Gizmodo, “The study convincingly showed that plastic in mackerel fed to seals could be detected in seal scat.” But there are a couple of caveats worth noting:

Hammer continues, “It’s important to be very clear about the conclusion of this study. They have shown evidence of trophic transfer, but this is not necessarily evidence that microplastic is ‘bioaccumulating up the food chain.'” “From a human perspective,” says marine scientist and engineer Richard Thompson, also not one of the study’s authors, “at the moment I think there’s cause for concern rather than cause for alarm.”

The danger of ingesting microplastics, unfortunately, extends beyond those who partake of fruits de mer. It’s in the water itself, and widespread. When scientists examined 159 samples of globally sourced tap water, 12 brands of Laurentian Great Lakes beer, and 12 brands of commercial sea salt, they found its particles basically everywhere. In the tap water, for example, 81% of the samples contained microplastics, most often fibers. Their report was published in PLOS One.

Can we safely ingest this stuff?

Short answer: Unknown. For some, it’s worth the risk in exchange for the nutritional benefits of eating fish. “To the best of my knowledge the benefits outweigh the costs,” researcher Chelsea Rochman tells Scientific American. Is there some level of microplastics we can consume that won’t hurt us, and where’s the limit? “We just need to try to understand what that threshold is,” she notes.

And it’s not that this a totally new problem. It’s just that the complexities involved have proven to be only more complicated the more scientists know about it. Innovative techniques are being deployed to try to get a better handle on what’s going on, such as those of ecotoxicologist Martin Wagner and others.

Still, all of the research into the mechanics is taking place against the background of an overarching understanding of the real problem: We have too much plastic, and we haven’t yet figured out a sustainable way to deal with it all.

Between fake vaccine passports and targeted supply chain attacks, things are only getting more risky.
Up Next
Starts With A Bang

Modified Gravity Could Soon Be Ruled Out, Says New Research On Dwarf Galaxies

Only approximately 1000 stars are present in the entirety of dwarf galaxies Segue 1 and Segue 3, which has a gravitational mass of 600,000 Suns. The stars making up the […]