Companies are investing in data-driven solutions that can shine a light on which business practices aren't working while offering solutions for improvement. 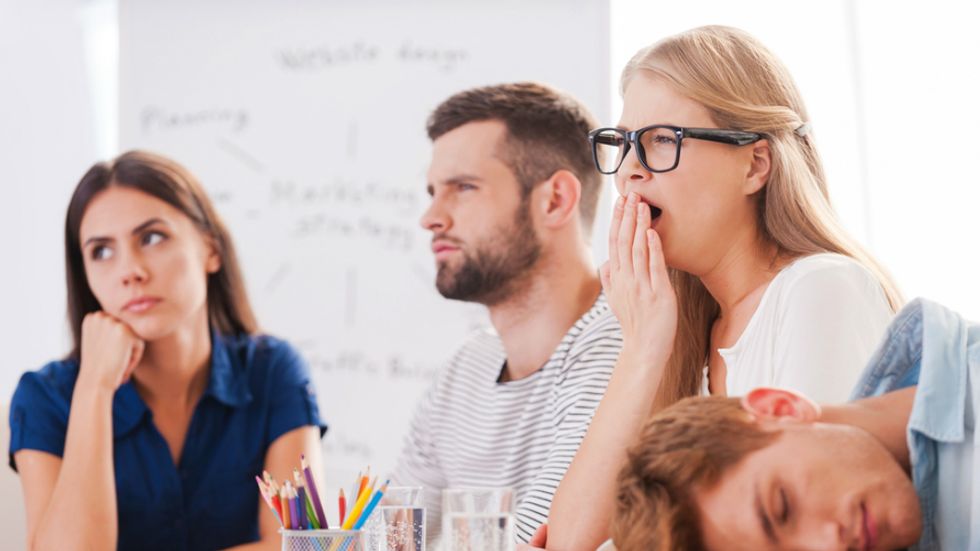 Ryan Fuller is CEO and co-founder of VoloMetrix, a company that defines itself as "a people analytics technology company that provides actionable insights to improve organizational responsiveness and drive productivity." That's a fancy way of saying Fuller's company analyzes the ways other companies run and determines what works and what doesn't. It's basically an HR juggernaut able to quantify things like employee satisfaction, efficiency, and overall time value. The entire people analytics movement, as explained in this piece by Forbes contributor Josh Bersin, represents a major shift toward companies finally investing in data-driven solutions to age-old problems related to efficiency.

Enter Ryan Fuller. The VoloMetrix CEO is author of an interesting post published today at Harvard Business Review all about one of the main things people identify with "age-old problems related to efficiency": the soul-sucking vacuum of the useless recurring meeting. Based on information and experience through VoloMetrix, Fuller claims to have a solution for doing away with the sorts of meetings that everyone attends out of habit yet from which nobody seems to benefit. It's not as simple as just abruptly ceasing to meet or, in the case of one of my prior employers, relaunching the useless recurring meeting as a more-useless recurring meeting that only recurs slightly less often. Instead, Fuller says you need a strategy:

"The key is to engage all employees in a new way of thinking about time management and to encourage them to hold themselves and their colleagues accountable. To liberate victims from this seemingly inescapable vicious cycle, it’s necessary to kick-start a virtuous cycle in which everyone is empowered to say no, ask why, and identify strategies to allow everyone in an organization to be more effective on a day-to-day basis."

Fuller offers a basic framework for doing away with unproductive meetings. It begins with transparency -- bosses need to let their workers in on the inner machinations that are going to alter their routines. A universal awareness allows for the understanding of gradual targets and eases the process by which benchmarks are met.

If you want to learn more about Fuller's precise recommendations, I recommend checking out his post (I've linked it again below). What's perhaps more fascinating here is the process through which VoloMetrix arrives at its solutions. Fuller explains:

"At VoloMetrix, we help companies quantify how much time goes into meetings and what effects they have on people. In the process, we have analyzed over 1 billion meetings across dozens of large businesses, so we have a rather unique perspective on both how widespread the problem is as well as how elusive the solutions are."

Initially I thought the billion was a typo but VoloMetrix apparently does have that much data under the hood. Just to illustrate how impressive that is: There are about 9.5 million businesses in the United States that claim revenues over $50,000. If you assume that each of those businesses (not necessarily companies, mind you) holds some sort of recurring meeting once a week, it would take over two years for the cumulative number of meetings to reach 1 billion. Safe to say that's a large enough sample size to glean some major insight. With that information stored in their vault, VoloMetrix performs diagnostics on client companies by first collecting relevant data and then analyzing it to determine places for improvement. This is how people analytics works. As it's put on the VoloMetrix site: "People analytics data provides a holistic map of your company's communication and collaboration behavior."

By collecting time management data from employees, companies that utilize people analytics can improve productivity without sacrificing employee engagement or morale. In fact, since this is basically big data doing the kind of work most people wish HR would do, most companies would be able to save time and money while simultaneously boosting employee satisfaction, especially if the agreed-upon solution includes the killing-off of unnecessary meetings. Fuller says VoloMetrix allowed one Fortune 500 company to gain back 5 hours per week per employee through its meeting-killing initiative. How much time could this sort of data save your business?