When paleontologists looked closely at the archaeological record from the transition from the Middle to Upper Paleolithic, they noticed it was punctuated by brief periods during which many new tools, art, and technologies suddenly appeared on the scene. They’ve tended to think these “bursts” of innovation were caused by changes in climate or biology. A new paper, however, suggests sudden innovations were triggered mainly by population growth and migration—a theory that might also explain why some cultures actually lost technologies, like how the Tasmanians mysteriously forgot how to fish.

“To some extent, Oren, Marc [study co-authors] and I felt that the simplest explanation could be that culture itself is capable of behaving in a punctuated fashion,” said co-author Nicole Creanza, assistant professor of biological sciences at Vanderbilt University.

A previous paper by the same researchers claimed there were several main ways by which human cultures advanced: 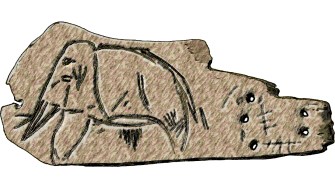 Engraving of a mammoth on a slab of mammoth ivory, from the Upper Paleolithic Mal’ta deposits at Lake Baikal, Siberia. [Wikipedia commons]

Computer simulations demonstrated that a combination of these three advances could have led to bursts of innovation. Their models also showed that when a population size doubles, it can actually support more than twice the amount of ideas.

The researchers used these findings to build new computer models that accounted for migration between cultures and innovations that help populations grow. One key thing to understand about the theory is that it assumes a proportional relationship to population size, migration and innovation:

According to the models, populations that migrated infrequently tended to only experience innovation bursts occasionally, and their innovations were at risk of dying out over time if migration wasn’t steady, or if their ideas didn’t enable the population to grow.

But when travel between cultures is frequent and steady, “it bridges societies, allowing for an exchange of ideas that creates a complex of interrelated cultures.” This can even create a feedback loop: When cultures are in continuous contact, they establish a steady flow of ideas, which enables the cultures to increase in size, thus increasing rates of innovation. 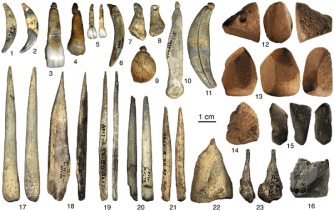 Explaining cultural complexity by way of population size might be popular trend in archaeology in recent years, but not all in the field agree with it. Still, a couple of the findings might benefit those looking to innovate in the modern world:

OmnesViae is a modern route planner based on the roads of the Roman Empire.
The Past

A recent advance in 3D imaging techniques helped spark the biggest ever discovery of North American cave art.
The Future

Capturing energy from clubbers could help power homes and buildings.
Up Next
Sex & Relationships

Thanks, Robot! Humans are Showing Kindness with Their AI Helpers.

Even though there is no ramification for being rude or cold to AI, we may have a tendency to display gratitude. Why? An interview with the founder of x.ai, Dennis Mortensen.