Siri, sorry for being rude earlier. My bad.

We spend a lot of time in 2017 talking and writing to non-humans. Whether it’s from interacting with a chatbot or asking Alexa for help, much of our communication is moving away from human-to-human and its attached norms of etiquette. Which begs the question: how should we be treating our AI helpers? With kindness or indifference?

“People tend to be very kind in the initial handover,” says Dennis Mortensen, founder and CEO of x.ai. The NYC-based company created two virtual assistants, Amy and Andrew Ingram, that assist with scheduling meetings. Users of the service simply copy Amy or Andrew on an email and the virtual assistant, handing over the often time-consuming back-and-forth when scheduling meetings. 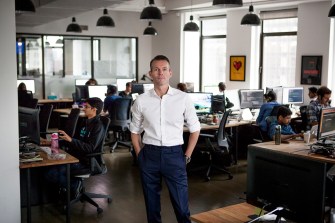 According to Mortensen, 11% of the communication with “Amy” and “Andrew” is to show gratitude for their work. Even though the virtual assistants don’t have feelings, people feel an urge to express their thanks along with adding social niceties. Hey Amy, would you be so kind…

People are clearly treating “Amy” or “Andrew” as if they exist as warm-blooded humans. And while some people may wrongly assume that Amy Ingram is a human assistant, x.ai has no intention of blurring the line (hence the AI initials). “We don’t want to fool anyone into thinking it is a human,” states Mortensen.

My favorite go to person now is Amy Ingram @xdotai

If we imagine AI agents as being more akin to employees or team-mates than apps, our relationship with them will need to be similarly dynamic and two sided...You can think of it as granting these autonomous agents a sort of rudimentary self-consciousness; this should, in turn, enable us humans to extend compassion to AI agents and to, on occasion, accept the agent’s choice even when it’s not aligned with our own world view. -Dennis Mortensen, founder & CEO of x.ai (from AI and the Fallibility Double Standard)

To better create a fluid two-sided dynamic between the virtual assistant and the user, x.ai has been injecting a greater level of empathy into the dialogue. In addition, the company is cognizant of the many nuances of conversation and the unintended impressions that AI responses may create. "Things that are so subtle can be problematic at scale," states Mortensen.

Why Do We Act with Gratitude Towards AI?

Mortensen believes that we typically don't "dehumanize" a virtual assistant because we, in turn, would be dehumanizing ourselves in the process. In other words, we display gratitude even when it's not necessary because to not do so would make us slightly worse off. As Mark Twain once stated, "Anger is an acid that can do more harm to the vessel in which it is stored than to anything on which it is poured."

Consider the visual of kicking a robotic dog.

Looking at this visual (or watching the video) makes you feel bad for the robot, anger towards the kicker, and an overall feeling that the kicker has degraded himself in the process. Even though the robotic dog does not have feelings, we expect people to treat it as greater than an object.

In setting up an interview with Mortensen, I dealt with my own conflicted impulses about how to treat Andrew Ingram--the virtual assistant who set up the phone call. Should I thank Andrew? I could clearly feel the divide between my logical brain (why waste my time to thank AI without feelings) versus my human heart (it feel good to be kind).

“We have created an emotional connect between our software and the human being. And I think this will continue to exist on other agents as well.”-Dennis Mortensen, founder & CEO of x.ai (from AI and the Fallibility Double Standard)

The process of dealing with "Andrew" and "Amy" made it clear that how we treat AI is more complicated than its lack of feelings. It is somewhat reminiscent of the act of gift-giving, where the giver's impulse is greater than merely helping a recipient--it feels good to be good. Likewise, even though we have permission to be utterly cold and rude to AI, it may be beneficial for us to show gratitude.

"Don't do it because of the machine," says Mortensen. "Do it for yourself."

Related
Strange Maps
The horrors of World War II air war, in one stark map
This graph shows how badly German cities were hit by Allied bombing raids.
Hard Science
Subatomic ghosts shed new light on the structure of protons
A Fermilab study confirms decades-old measurements regarding the size and structure of protons.
The Present
The Taoist philosophy behind Alibaba, China’s e-commerce giant
Alibaba has played a key role in China’s meteoric economic rise.
The Well
Can we condition ourselves to be heroes?
Neuroscientist Robert Sapolsky on the science of temptation, and the limitations of your brain’s frontal cortex.
▸
6 min
—
with
Robert M Sapolsky
Thinking
3 brain games to practice deductive, inductive, and abductive reasoning
Take a closer look at the different types of reasoning you use every day.
Up Next
Starts With A Bang
No, mysterious signals from space are not dark matter
If you have a choice between “known astrophysical objects” and “new physics,” bet on the known.“Two recent studies by teams in the U.S. and the Netherlands have shown that the gamma-ray […]