They’re one of the biggest stadium-rock bands in the world, but Coldplay will not be touring for the foreseeable future, as they seek to make their concerts less environmentally damaging.

“We’re taking time over the next year or two to work out how can not only our tour be sustainable but how can it be actively beneficial,” lead singer Chris Martin told the BBC at the release of the band’s new record, Everyday Life.

Rock concerts and festivals may be joyous celebrations of music and togetherness, but they generate a serious carbon footprint and mountains of trash. After their last album, Coldplay performed 122 shows on five continents.

“Our dream is to have a show with no single use plastic, to have it largely solar powered,” Martin said, adding: “We would be disappointed if (the next tour) is not carbon neutral.”

“The hardest thing is the flying side of things.”

Rock stars’ jet-setting is not the biggest cause of greenhouse gas emissions, according to the Green Touring Network, a German organisation that aims to improve the environmental performance of live music. While band transport produces less than 10% of total emissions, the carbon emitted by fans travelling to and from gigs accounts for a third. Another third is emitted at the venue itself. 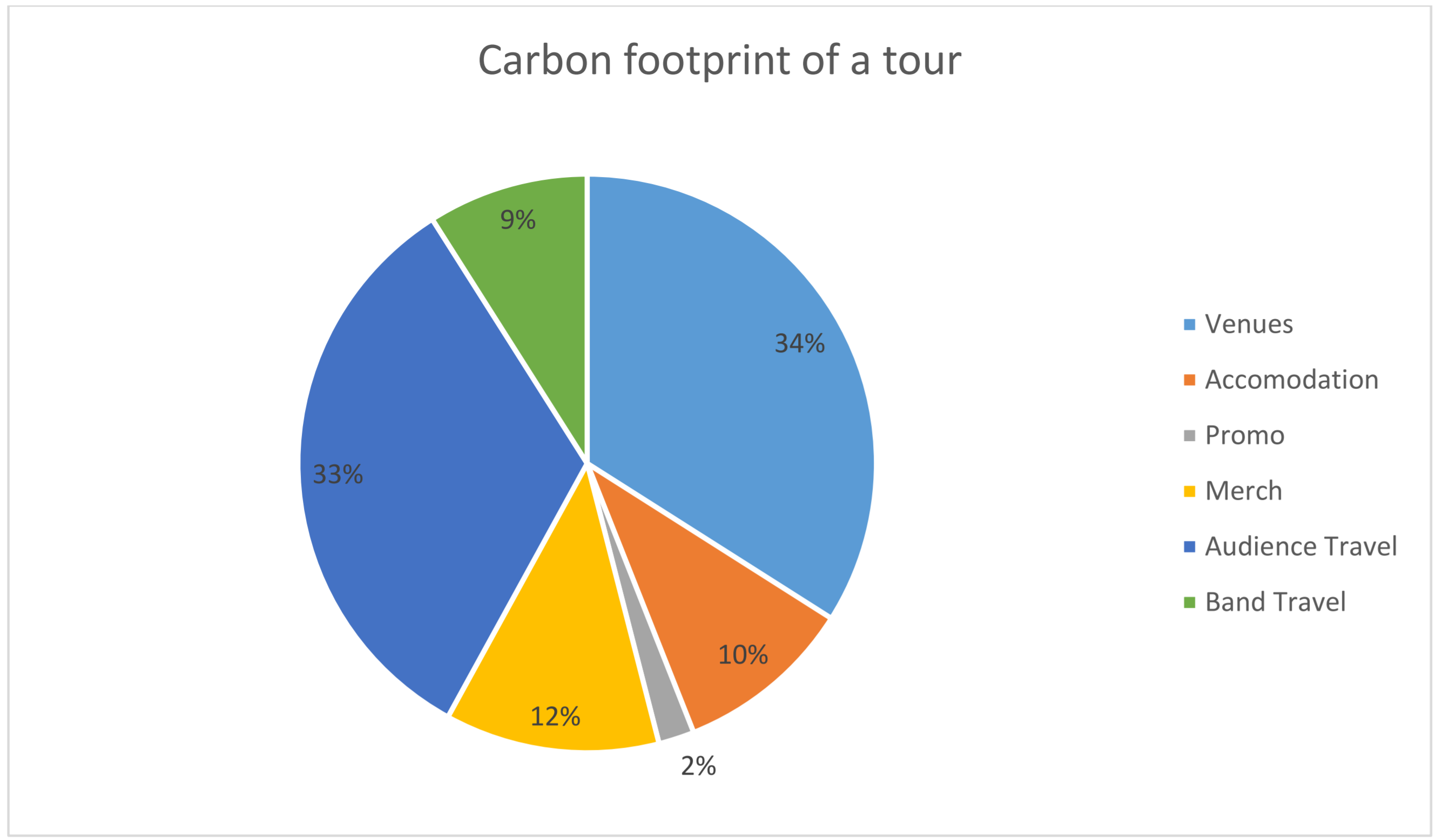 Transport, accommodation and the venue are the main sources of a gig’s greenhouse emissions. Image: GreenTouring

Coldplay are not the first band to examine their carbon footprint. In 2008, Radiohead – vocal campaigners for climate action – said they were trying to make their tours ‘eco-friendly,’ choosing, among other things, to perform at venues accessible by public transport.

Most recently, Billie Eilish said she would reduce the environmental footprint of her world tour next year by, among other things, banning single-use plastic and ensuring the availability of recycling facilities. The singer, who will be 18 during her Where do we go tour, also plans to install an ‘eco-village’ at each gig where audience members can learn about the environment.

With more than 40 million followers on social media, her calls to action, including this YouTube video, will not go unnoticed.

Eilish is following in the footsteps of veteran blues singer Bonnie Raitt, whose Green Highway tours include environmental awareness booths.

To green-up her own tour, Eilish is working with REVERB, a consultancy set up to build on the work started by Raitt, which has also worked with artists including Dave Matthews Band, Jack Johnson, Maroon 5, John Mayer and Barenaked Ladies to improve their performances’ environmental performance.

Tags
entertainmentenvironmentlive musicmusicsustainabilitytravel
In this article
entertainmentenvironmentlive musicmusicsustainabilitytravel
Related
Life
Strange life forms create an “alien” ecosystem in an abandoned uranium mine
Slimy biofilms made up of bacterial and eukaryotic life forms have taken over an abandoned, flooded uranium mine in Germany.
The Present
Climate change is altering the chemistry of wine
Smoke taint from wildfires is gross, even to wine amateurs.
Life
Our antidepressant drugs are affecting animals and ecosystems
A toxicologist explains the impacts of antidepressants on fish — and no, they’re not getting any happier.
Hard Science
200 years of exploring Antarctica
What we’ve learning from the world’s coldest, most forbidding, and most peaceful continent.
Life
Most of the seafloor is a thick graveyard of ooze
Each year, several trillion pounds of microscopic silicon-based skeletons fall down the water column to pile up into siliceous ooze.
Up Next
Hard Science
Snakes with hind legs were the old normal
A tiny, perfectly preserved 3D fossil from Argentina tells us more about an early snake.