Over countless iterations, mutations of all sorts come and go. Some prove to be useful and enhance an organism’s chances of reproduction, while others pop into existence and quickly drop away, having either no impact on the species’ survival or even reducing its chances of surviving. For a long time, legs on snakes seemed to be one of the latter. New research just published in Science Advances, however, reveals that serpentine gams had a long run: 70 million years.

Digging up the truth

The insight comes from the discovery of well-preserved, nearly one-million-year-old fossils belonging to the Cenomanian-periodNajash rionegrina, an early snake with hind limbs. They were found in the La Buitrera Palaeontological Area of Argentina’s northern Patagonia. Snakes go back to the upper Middle Jurassic, but there are significant gaps in the fossil record.

Though the eight fossils are skulls — especially one “near perfectly preserved three-dimensional” specimen that “clarifies several long-standing problems on the origin of key features of the modern snake skull,” according to the paper — they provide new information regarding owners’ bodies. The researchers used light microscopy and tomography scanning to see inside the fossils. “Morphological and molecular analyses including the new cranial data provide robust support for an extensive basal radiation of early snakes with hindlimbs and pelves,” says the study.

Lead author Fernando GarberogliotellsCNN, “Our findings support the idea that the ancestors of modern snakes were big-bodied and big-mouthed — instead of small burrowing forms as previously thought.” 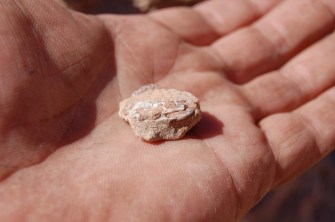 Garberoglio actually found the 95 million-year-old specimen about seven years ago when he was still an undergraduate paleontology student from the Universidad de Buenos Aires. After picking up a pebble on a dig, he found a tiny ancient, bony face staring up at him.

The Najash snakes are in some ways a combination lizard/snake. They had a lizard-like jugal bone, a cheekbone arch, and something of a jawbone. Says Garberoglio speaking to the New York Times, “The absence of the jugal in snakes has long been considered to be a defining ‘shared feature’ of all snakes, fossil and living. This new 3D specimen of Najash makes it clear that the jugal was present in ancient snakes and subsequently lost in modern snakes.”

Lke a snake, however, they lacked a bony arch connecting the cheekbone to the skull. But then again, the Najash snakes didn’t have the series of bony crests ubiquitous among more recent snakes.

Since Najash snakes — and their hind legs — were around for 70 million years, the paper concludes that the legs weren’t a mere transient feature between limbed and limbless body forms, but were a stable aspect of a stable species. With no sign of front legs, it’s assumed that, if Najash snakes ever had them, they were lost at some easier time.

Tags
animalsdiscoveryevolutionpaleontologysciencesnakes
In this article
animalsdiscoveryevolutionpaleontologysciencesnakes
Related
The Well
Can we condition ourselves to be heroes?
Neuroscientist Robert Sapolsky on the science of temptation, and the limitations of your brain’s frontal cortex.
▸
6 min
—
with
Robert M Sapolsky
Life
Our antidepressant drugs are affecting animals and ecosystems
A toxicologist explains the impacts of antidepressants on fish — and no, they’re not getting any happier.
Thinking
Visual thinking: How to understand the inner lives of animals
Humans are good visual thinkers, too, but we tend to privilege verbal thinking.
Life
Scientists use CRISPR to insert an alligator gene into a catfish
Disease kills off 40% of farmed catfish. This gene protects them.
13.8
Why the origin of life and the Universe itself might be forever unknowable
There might be a hard limit to our knowledge of the Universe.
Up Next
Starts With A Bang
Science Shows Us Just How Frozen Star Wars’ Ice Planet Hoth Must Be
If an AT-AT walker (or something even larger) wanted to walk across a frozen lake, how thick would the ice have to be?Each winter, one of the most spectacular phenomena that […]