At the time of writing, marijuana is legal in 14 of the United States and decriminalized or permitted for medical purposes in 16 more. Several other territories have taken similar steps as well. After a long and costly drug war, the political and cultural momentum behind decriminalizing marijuana appears to be unstoppable.

However, these legal changes have ramifications for how the plant is tended. While past growing methods focused on balancing the need to keep the plant hidden with botanical concerns, modern techniques are increasingly focused on mastering industrial-scale production within legal limits. Indoor growing is a popular answer for both situations, keeping warrant-less prying eyes away in one case while also allowing for heightened security and climate control in another.

These operations cost a small fortune to maintain the needed apparatus. Since cultivators have come out of hiding and industrialized, the costs involved have only grown. Modern indoor facilities consider the temperature, humidity, and even the composition of the air and how they affect their plants — all of which call for equipment that eats electricity like it has the munchies.

Information on how much pollution these operations were creating has been lacking up until now. A new study published in Nature Sustainability measures the carbon cost of industrial marijuana production in every state and considers ways to make the green stuff a little more green.

The study uses a model based on the actual operating procedures of a modern warehouse-style growing system, like the kind used by 41 percent of producers who sell in the legal market.

It accounts for factors like the warehouse’s HVAC system, which replaces the air in the room an average of 30 times an hour, the air conditioning, the heating, the humidity control, the lighting, the cost of producing supplemental CO2 to aid plant growth, the costs of the average irrigation system, and other elements of production and distribution. Information for different locations can be plugged in, areas with climates unsuited for growing the plant will incur higher temperature control costs, and the required electricity be calculated.

This information can be compared to the known carbon cost per kilowatt-hour in a given area. The results of feeding different information into this model can be seen on this map: 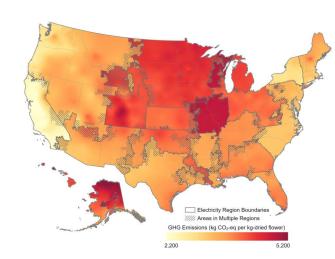 The carbon price of producing marijuana in a modern warehouse by area in the 50 states and DC. Credit: Jason Quinn et al.

As certain stereotypes would lead you to suspect, southern California can produce marijuana at the lowest environmental cost, caused both by a reduced need for climate control and the abundance of renewable energy in the local grid. The highest costs were incurred in Hawaii, partly due to the burning of oil to produce power on the islands and the large carbon footprint this creates. Differences across the country can be explained in similar terms, with some areas needing lots of carbon-intensive electricity to produce cannabis and others having cleaner energy or more suitable climates.

Across the country, the price of a kilogram of cannabis flowers, the part which is smoked, ranges from around two to five tonnes of carbon dioxide.

I spoke with several “experts” who agreed that the typical American joint has roughly .3 grams of marijuana in it. Using the above data, we can estimate that your regular smoke requires just over one kilo of greenhouse gases to produce, equivalent to burning an eighth of a gallon of gasoline. For comparison, a single bottle of beer might produce half that, and the footprint of an entire bottle of wine is only slightly higher.

The authors point out that most of these environmental costs, perhaps 80 percent, are tied to the methods used to grow the plant indoors and can be reduced by making outdoor cultivation feasible. Such a shift would have noteworthy effects on a state’s overall carbon footprint. As the study says:

“If indoor cannabis cultivation were to be fully converted to outdoor production, these preliminary estimates show that the state of Colorado, for example, would see a reduction of more than 1.3% in the state’s annual

Such a switch would reduce the carbon footprint of the plant’s production by 96 percent. If the change were instead from warehouses into greenhouses, the cut would be a still substantial 43 percent, and the various benefits of growing the planet inside, such as security, would remain.

Additionally, large variations between indoor operations exist as well, some of which are not fully described in the above map. In Colorado, for example, the carbon cost of growing marijuana in Leadville is 19 percent higher than it is in Pueblo, primarily due to differences in climate. If state regulations allowed cannabis grown in Pueblo to be sold in Leadville, the net carbon emissions would fall even after accounting for transportation. The same might be said for interstate sales, though that seems further off.

In the heady rush to legalize marijuana, the question of how this would impact the environment seems to have slipped past state legislatures, producers, and consumers. General efforts to lower greenhouse gas emissions will have to take the production of a drug that 13 percent of American adults use each year into account.

Tags
climate changedrugsearth scienceenvironmentmarjiuanaplantsPsychedelics & DrugsSolutions & Sustainability
In this article
climate changedrugsearth scienceenvironmentmarjiuanaplantsPsychedelics & DrugsSolutions & Sustainability
Related
Life
Our antidepressant drugs are affecting animals and ecosystems
A toxicologist explains the impacts of antidepressants on fish — and no, they’re not getting any happier.
The Present
How heat pumps of the 1800s are becoming the technology of the future
Innovative thinking has done away with problems that long dogged the electric devices — and both scientists and environmentalists are excited about the possibilities.
Neuropsych
Daily caffeine intake temporarily alters your brain structure
Compared to people who took a placebo, the brains of those who took caffeine pills had a temporarily smaller gray matter volume.
Hard Science
The violence of the Tonga eruption is a wake-up call to watch other submarine volcanoes
Out of sight, but not out of mind.
The Present
How circular economics can make us happier and less stressed
Entrenched business wisdom says that community-led economic systems are pure fantasy. Douglas Rushkoff disagrees.
Up Next
Communication
Douglas Rushkoff: How to stop othering the other
Did you know that American politics has become polarized? Shocking news, we know, but in case your news feed wasn’t evidence enough, Pew Research Center has been tracking the phenomenon […]