Anxiety is the most common mental health disorder in the U.S., affecting an estimated 18.1 percent of the population. But the condition doesn’t affect all groups equally. Over the past decade, studies have consistently shown that teenagers and young adults are the most likely to suffer from anxiety, and they often report conditions like depression along with it.

Now, a new study brings this disparity into sharper focus, showing that anxiety in adults ages 18 to 25 increased rapidly from 2008 to 2018, but remained stable for adults 50 and older.

The study, published in the Journal of Psychiatric Research, examined data from the National Survey on Drug Use and Health, which measured anxiety by asking respondents, “How often did you feel nervous during the past 30 days?” The researchers categorized respondents into groups based on factors like age, sex, race, educational attainment, and marital status.

The sharpest uptick occurred among young adults, whose self-reported anxiety nearly doubled from 7.97 percent in 2008 to 14.66 percent in 2018. 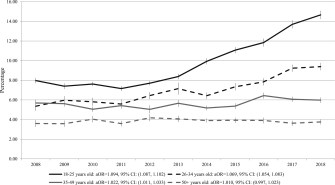 “Anxiety is most common and has increased most rapidly among young adults,” the researchers wrote. “Anxious temperament and subclinical anxiety earlier in life is associated with increased risk of subsequent onset of anxiety disorders, depression, substance use disorders and physical health problems. Young adulthood is the key period of vulnerability for the onset of these conditions.”

What’s also striking is that anxiety increased in almost all groups, though not quite equally. Besides young adults, the most rapid increases were among:

The new study didn’t focus on the root causes of anxiety, but the researchers noted that the “explosion of social media” may play a part. After all, there seem to be strong links between social media use and mental health problems.

A study published by the National Institutes of Health notes:

But social media is just one part of the conversation about rising anxiety in young people. Researchers and social critics have proposed other potential contributors, including parents who over-coddle their children, the increasing atomization of society, sedentary lifestyle, poor diet, Americans’ pursuit of extrinsic versus intrinsic goals, and economic uncertainty, to name a few.

In short: Explaining the 21st-century anxiety boom is complicated, especially amid the COVID-19 pandemic.

It’s still unclear how the pandemic is affecting mental health in the U.S., but a recent study from the Centers for Disease Control and Prevention provides some clues.

In June, 5,400 American adults completed an online survey about mental health, suicidal ideation, and drug use. The survey found that 41 percent of all respondents reported symptoms of at least one mental health condition, like anxiety or depression. But there were big differences between groups.

“Identification of populations at increased risk for psychological distress and unhealthy coping can inform policies to address health inequity, including increasing access to resources for clinical diagnoses and treatment options,” the CDC researchers wrote.

Metabolism and mitochondrial functioning seem to have far more to do with mental health than many people might expect.
Up Next
Health