There is no greater teacher than experience — or the experience of others, it turns out. Educating the anti-vaxx population has proven to be challenging, yet a new intervention conducted by researchers at Brigham Young University appears to work: introduce anti-vaxxers to people who have suffered from vaccine-preventable diseases.

The study, published in the journal Vaccines, was conducted with college students in Provo, Utah, a city with the sixth-highest number of under-vaccinated kindergartners. Of the 574 student volunteers, 491 were pro-vaccine and 83 were vaccine-hesitant.

Half of these students interviewed someone who had suffered from a vaccine-preventable disease (such as polio); the control group interviewed people who had lived through autoimmune diseases. Simultaneously, some students were enrolled into classes featuring immune- and vaccine-related curriculum, while others received no vaccine training in the health class.

The following questions were asked before their interviews: 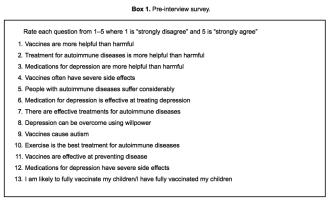 And these were the questions were asked to the interview subject:

Finally, the students were asked a longer set of questions after their research, including whether vaccines, treatment for autoimmune diseases, and depression medications are “more harmful than helpful”; if vaccines cause autism; how hearing about the vaccine-preventable disease changed their views on vaccines; and how much financial impact affected their thoughts on treatment. Finally, researchers wanted to know if the study changed their feelings on vaccines.

“Vaccines are victims of their own success. They’re so effective that most people have no experience with vaccine preventable diseases. We need to reacquaint people with the dangers of those diseases.”

By the end of the study, around 70 percent of vaccine-hesitant students reassessed their position, even with no vaccine class training. Learning about the suffering of others shifted their perspective, as one student, who interviewed her grandmother (who had suffered from tuberculosis), put it:

A full three-fourths of the vaccine-hesitant students increased their “vaccine attitude scores,” with half of them moving fully to the pro-vaccine side. While the educational curriculum was important, the biggest change occurred when students talked to those that had suffered from vaccine-preventable diseases.

Content not available
The Journey of Your Child’s Vaccine

The Journey of Your Child’s Vaccine

Yesterday, the New York Times editorial board called for the State of New York to end the religious exemption for vaccines. Exceptions should be made if the health of the child is endangered, as current law dictates. Considering 41 cases were diagnosed last week — 30 in New York alone — the board states this is not the time for legislation to be paused in the courts. Religious belief, they write, does not give anyone the right to infect other members of society.

With so much misinformation circulating since the infamous, discredited autism-vaccine study (though anti-vaccine activism existed before that day), the researchers at BYU might have hit upon an important antidote. As Poole concludes:

“If your goal is to affect people’s decisions about vaccines, this process works much better than trying to combat anti-vaccine information. It shows people that these diseases really are serious diseases, with painful and financial costs, and people need to take them seriously.”

Non-Western thought is vast and ancient, so why don’t some consider it philosophy?
Neuropsych

Beautiful people really know how to catch a break.
Up Next
Neuropsych

Not having children is another choice we should be discussing

In her new documentary, Maxine Trump tackles the topic of choosing not to procreate.