In 2015, Pope Francis stated that a society that does not surround itself with children is “depressed,” calling couples choosing not to procreate “selfish.” He followed that up by claiming that societies that multiply are “enriched, not impoverished.” Perhaps he hasn’t checked out the American public education system lately.

Ol’ Frank isn’t alone in this assessment. Numerous countries are concerned about dwindling populations, making economic arguments about why their nations’ women better get to work (in bed). Never mind that global overpopulation — we’ve doubled our number in the last half-century alone — is draining the planet of resources and destroying ecosystems and species. Capitalism demands exponential growth.

Maxine Trump cringes when I mention the economic argument for procreation. The director of the forthcoming documentary, To Kid Or Not To Kid, has spent the last few years researching and filming women who choose not to procreate. While a variety of reasons for such a decision exist, Trump finds the financial philosophy disturbing:

“The economic arguments don’t make sense. We interviewed an economist in the film that agrees with that. He’s right at the end of the film, so I don’t want to give away too much, but he doesn’t sign up to the economic driver argument. Right now, you probably don’t know how many things you are using that are made by robots. How are we going to actually have a meritocracy where people can actually afford to live? Let’s think about that for a second.”

Trump — “no relationship” declares her email signature — is already witnessing people feeling the economic pinch in a world with too many citizens struggling to capture a tiny slice of the pie. Money, she assures me, is not the only reason couples are choosing to live without children.

To Kid or Not To Kid – Kickstarter

To Kid or Not To Kid – Kickstarter

Having cut her teeth as a development executive for scripted comedy at the BBC, Trump takes a humorous approach to this contentious topic. Now calling Brooklyn home, she discovered that a child-free existence is a cross-cultural topic. When I ask if she’s ever been called “selfish,” she tells me the story of a nun she interviewed who chose her vocation for that very reason. While a convent isn’t in Trump’s future, she shared common ground with this devotee.

Trump has, in fact, been called selfish, an interesting charge made by an animal that will soon be responsible for the extinction of a million species of other animals. Earlier this year, Alexandria Ocasio-Cortez caused a conservative ruckus when asking if childbearing is still acceptable in the age of climate change. Trump says AOC’s argument for not having kids is one reason of many.

“You have to ask, ‘Why is this deemed an unpopular choice?” she says. “Twenty percent of women choose not to have children now. I find it strange that people like to present this as being an outsider view.”

According to Trump’s research, a whopping 45 percent of pregnancies are unplanned. The word “choice” comes up a lot during our talk, which isn’t surprising given the recent spate of states attempting to dismantle abortion rights. As the film makes its way around the festival circuit, Trump is specifically traveling to states that recently passed anti-abortion legislation. Surprisingly, just realizing that a child-free lifestyle is possible stuns a lot of women.

“It’s very difficult when the choice has been taken away from you. What we really talk about in the film is believing you have a choice,” Trump says. “Some women I’ve interviewed didn’t know that they could decide not to have children. They honestly responded to me saying, ‘I didn’t even know it was a choice I could make.'” 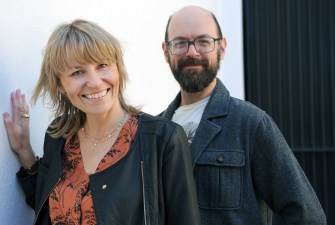 Which brings me to religion, as well as even touchier topics, such as parents that are not economically prepared to have children doing so anyway. At every turn, Trump states that she tried really hard to not judge any decisions made by other women. Isn’t unwarranted judgment at the heart of this film to begin with?

It’s not necessarily the religious, she follows, but parents of large families that seem most likely to criticize others for not bearing children. As recent research suggests, however, selfishness is not at the heart of the no-children decision. A study of healthy, egg-freezing women in the U.S. and Israel discovered the number one reason is “lack of a partner.” There are many intelligent and committed men out there — but not enough, it seems.

Procreation is how we perpetuate the species. Yet humans are unique on this planet. Given the opportunity, every animal will multiply like crazy. Take Australian rabbits and feral cats, jellyfish in warming oceans. Biology dictates survival at all costs.

Our unique attribute is metacognition: I am aware that I am aware. The perplexing problem at the heart of the human condition: an innate impulse to procreate even while recognizing the danger it presents. Our lifestyles are threatening all existence on this planet, yet if we take precautions we could be the species that saves itself from itself. “Let this cup pass from me,” followed by the realization that we’re also pouring the wine. Biology and philosophy have rarely battled so tirelessly.

Regardless of the choices we make, Trump hopes women maintain the right to choose in the first place. If that decision turns out to be “nay” on procreation, then it shouldn’t be judged as weird or selfish, but just as another means for experiencing life. Mostly, she made this film to let others know they’re not alone in their decision.

“People like to feel safe. Safety is deemed by not making the unpopular choice. I just wish it wasn’t hard like that. That’s really what the film is trying to get across: ‘Hey, we’re out here.'”

You can love a romantic partner, but also a pet, a book, God, or the sound of someone’s voice. We need many more words for love.
Health

The “sonnenrad” used in shooters’ manifestos: a spiritual symbol of hate

The sonnenrad is a Heathen symbol composed of 12 repeated runes.
Up Next
Starts With A Bang

What Was It Like When The First Humans Arose On Earth?

70,000 years ago, a brown dwarf pair known as Scholz’s Star, right on the precipice of igniting hydrogen fusion in its core, passed through the Solar System’s Oort cloud. Stars, […]