What’s the toughest thing on the planet? Cockroaches are famously difficult to eradicate, and it’s said they’re one of the few critters capable of surviving a nuclear apocalypse. The tardigrade can survive extreme temperatures, extreme pressures, and even the vacuum of space. Now there’s another contender for the toughest living thing around: Deinococcus radiodurans.

In the Guinness World Book of Records, D. radiodurans is listed as “the world’s toughest bacterium.” It’s classified as an extremophile, a living thing capable of surviving and thriving in conditions too hot, cold, or chemically antagonistic for the majority of life on Earth. Its toughness is so renowned, it’s even been called “Conan the Bacterium.” 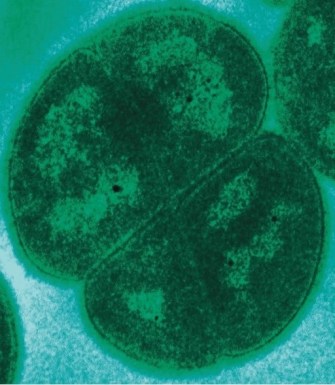 A tetrad of D. radiodurans observed via a transmission electron micrograph.

What makes D. radiodurans so tough?

The bacterium was discovered in 1956 by researcher Arthur Anderson, who was conducting experiments to see whether canned foods could be sterilized by blasting it with gamma radiation. However, a can of ground beef and pork spoiled despite Anderson’s gamma radiation treatment. When he isolated the bacteria present in the beef and pork, he found D. radiodurans, happily munching away at the canned food.

This is where D. radiodurans got its name; the bacterium is uniquely resistant to radioactivity. Where 1,000 rads would kill a human within a couple of weeks, D. radiodurans can survived 1 million rads without breaking a sweat. At 3 million rads, significant numbers of the bacteria die, but a few still manage to survive. It’s even been found on the walls of nuclear reactors.

But D. radiodurans isn’t exactly shielded from radiation. When the small particles emitted by radioactive material shoot through living things, they tear up the DNA and proteins that life uses to function, ultimately destroying cells or causing them to mutate in unusual and unhealthy ways. D. radiodurans, like all life, is susceptible to this. But it excels at repairing the damage. All life can repair damage to their DNA to some extent, but D. radiodurans is so gifted at this process that it can take a dose of radiation that would kill your, or me, in literal seconds and be as healthy a bacterium as ever a day later.

D. radiodurans‘s trick to this remarkable durability is to have multiple copies of its chromosome and DNA repair molecules, enabling it to quickly take a similar strand of DNA and write it over the damaged kind. Each D. radiodurans cell contains between four and ten copies of its chromosomes. What’s more, its chromosomes are bunched up in the shape of a donut, with each copy stacked on top of each other. Most bacterial life has its genetic material distributed much more loosely. Researchers speculate that D. radiodurans‘s tightly packed genetic material make it easier to find damaged DNA and correspondingly healthy DNA with which to repair the damage.

What can it be used for?

Obviously, a bacterium this unique offers some exciting opportunities to humanity. First, it could be used for bioremediation, or the process of using microorganisms to clean up contaminated environments. In areas with high radioactivity, D. radiodurans can be and has been genetically modified to consume and digest heavy metals or other toxic materials. It’s incredible ability to repair its DNA is of interest to researchers looking into slowing down the human aging process — which is really just accumulated DNA damage — or improving our resistance to radiation and cancer.

More whimsically, D. radiodurans could be used as a means of storing information to retrieve later after a nuclear apocalypse. DNA is really just data in a biological format, and using this principle, researchers were able to translate the lyrics toIt’s a Small World into DNA segments and insert this message into D. radiodurans‘s DNA. After the bacteria reproduced 100 times, they could retrieve the song’s lyrics from D. radiodurans‘s DNA with no errors whatsoever.

Maybe after all the bombs go off and we’re all hiding in our basements from the irradiated, massive, and mutated insects that roam the nuclear wasteland, we’ll be able to read D. radiodurans‘s DNA in search of a friendly message from the past.

Tags
bacteriacancerdnageneticsmicrobiology
In this article
bacteriacancerdnageneticsmicrobiology
Related
Surprising Science
What happens when two different respiratory viruses infect the same cell?
A new study looks at what happens when you get infected with two viruses at the same time.
Life
Rhino mystery going back to Darwin solved
A recent study sheds light on the evolutionary history of rhinoceroses and their remarkably low levels of genetic diversity.
Life
A strange link between grizzly bear DNA and human language
A genetic study of British Columbia grizzly bears finds a weird link to local human languages.
Health
Helmet worn at home shrank man’s brain tumor by a third
The new brain tumor treatment targets a cancer that kills 75% of patients within a year.
Life
28 ancient viruses unknown to science found in a Tibetan glacier
Scientists discover surviving viruses in 15,000-year-old glacier ice on the Tibetan Plateau in China.
Up Next
Hard Science
Colonizing space will require gear that doesn’t exist yet. But they’re in the works.
What will it take to conquer our immemorial space dream?