Swiss physician Paracelsus knew chemicals that heal in small doses can be toxic in large doses. The 16th-century “father of toxicology” spent his career investigating the effects of chemistry on human biology—and consciousness.

Psychedelics offer some of the most profound changes in consciousness known to humankind. As with the work of iatrochemists (chemists that provide chemical treatments for disease, a discipline vocally championed by Paracelsus), modern researchers recognize that understanding the dosage requirements of psychedelics is essential for determining efficacy. While overdosing can be psychologically damaging, psychedelics are generally not deadly, making them ideal for study.

Most people don’t worry about overdoing LSD or psilocybin, however. The current trend is almost homeopathic in nature. Microdosing has become the productivity pastime of the Silicon Valley set, with knowledge workers swearing that minute quantities of LSD help them focus. Given the legal status of psychedelics, however, research has been scarce, though growing.

Imperial College London’s Centre for Psychedelic Research has led the way in clinical trials. Director Robin Carhart-Harris has published over 100 papers on the effects of psychedelics on a variety of mental health issues. The center recently produced one of the first large-scale studies on microdosing, with a caveat—the psychedelics were self-supplied (to skirt legal issues) and the psychological results self-reported.

For the study published in eLife, the team recruited 191 citizen cosmonauts to microdose either LSD or a placebo over the course of several weeks and note the psychological effects. Volunteers were already microdosing LSD, so there was no true control. Each volunteer was given instructions on creating their own low-dose gel capsules, some containing LSD, others not. Then they mixed the capsules in envelopes so they didn’t know if they were taking the real thing or not.

The trial design was ingenious: each capsule featured a QR code that was scanned after the addition of ingredients but before they were placed in the envelope so that researchers knew what they were ingesting.

The problem: volunteers sourced their own LSD. Lack of quality control could have had a profound effect on the results.

The results: LSD microdosers reported feeling more mindful, satisfied with life, and better overall; they also noticed a reduction in feelings of paranoia.

The catch: the control group felt the same thing, with no statistical difference between the groups.

Lead author Balázs Szigeti comments on the findings: “This suggests that the improvements may not be due to the pharmacological action of the drug but can instead be explained by the placebo effect.” 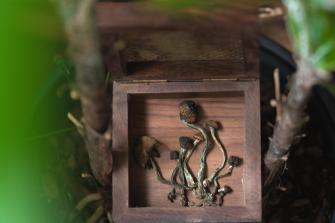 Psychedelics are notoriously difficult to control for given the intensity of the experience. Yet there is precedent for the above findings. A 2019 study found that 61 percent of volunteers that took a placebo instead of psilocybin felt some psychedelic effects, with a few volunteers experiencing full-on trips.

“Several stated that they saw the paintings on the walls ‘move’ or ‘reshape’ themselves, others felt ‘heavy. . . as if gravity [had] a stronger hold’, and one had a ‘come down’ before another ‘wave’ hit her.”

The Imperial team believes the expectation of a trip might have been enough to produce similar results. Senior author David Erritzoe is excited for future studies on the topic, believing they tapped into a new wave of citizen science that could push forward our knowledge of psychedelic substances.

“Accounting for the placebo effect is important when assessing trends such as the use of cannabidiol oils, fad diets or supplements where social pressure or users’ expectations can lead to a strong placebo response. Self-blinding citizen science initiatives could be used as an inexpensive, initial screening tool before launching expensive clinical studies.”

As investments into the psychedelics market explode, with one company reaching a $2 billion valuation, a recurring irony appears in the long arc of psychedelics and research: the power of our minds might be enough to feel greater life satisfaction and a deeper sense of mindfulness. If that’s possible with a placebo, we have to question why the rush to create more pharmacology is necessary.

This is, mind you, a separate conversation over the role of psychedelics and rituals for group bonding. The function of group cohesion around consciousness-altering substances will continue to play an important role in many communities.

Of course, we should continue to explore the efficacy of psychedelics on anxiety, depression, suicidal ideation, PTSD, and addiction. Pharmacological dependence is a stain on the psychiatry industry. Whether or not psychedelics can be prescribed for daily use remains to be seen, but we know a moneyed interest is expecting a return on investment—the above company, ATAI Life Sciences, raised $157 million in its Series D round.

When it comes to wellbeing, some things money just can’t buy. How we navigate the tricky terrain of mainstreaming psychedelics remains to be seen.

Tags
addictionanxietydepressionhuman bodymedicinemental healthmindfulnessNeuropsychneurosciencePsychedelics & Drugspsychology
In this article
addictionanxietydepressionhuman bodymedicinemental healthmindfulnessNeuropsychneurosciencePsychedelics & Drugspsychology
Related
Neuropsych
Asthma drug brings back “lost” memories
In a study involving mice, scientists used two different techniques — one optogenetic and one pharmacologic — to recover “lost” memories.
Stoicism: How to turn your sadness into strength
Chloé Valdary shares the ancient Stoic principle that can defeat modern despair.
▸
7 min
—
with
Chloé Valdary
Life
Our antidepressant drugs are affecting animals and ecosystems
A toxicologist explains the impacts of antidepressants on fish — and no, they’re not getting any happier.
Sponsored
Want to boost your happiness? Buy experiences, not material possessions
Some experiences continue to pay dividends time and time again.
If money doesn’t buy happiness, you’re spending it wrong
These money experts say you can buy happiness. There are some red flags to look out for, though.
▸
7 min
—
with
Lindsay Bryan-Podvin
Up Next
Starts With A Bang
Ask Ethan: How Prepared Are We For The Next Giant Solar Flare?
Not nearly well enough. And we should all be concerned.In 1859, the science of solar physics truly began with the largest eruption in recorded history: the Carrington event. Prior to […]