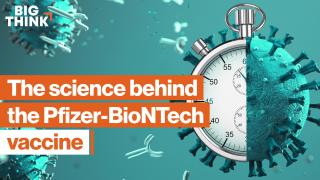 How were mRNA vaccines developed? Pfizer's Dr Bill Gruber explains the science behind this record-breaking achievement and how it was developed without compromising safety.
▸
7 min
—
with
Pfizer

DR. BILL GRUBER: Historically, vaccines have been one of the most important medical intervention for public health. Diseases like smallpox that used to have a 30% mortality rate, that are completely wiped from the face of the Earth.

When it looked like there was the potential for us to engage in moving forward a COVID-19 vaccine, there was the daunting challenge to do something that had never been done before. And that was to try to get a vaccine out within less than a year.

That, I can tell you, is unprecedented in history.

If you had asked me at the time, "what did I think the chances of our success were at the very beginning of this?" I would say well less than 50% because the fastest way any other vaccine had ever been developed, to my knowledge, prior to COVID-19 was 4 years.

And so, as we were looking at this with our partners at BioNTech, we had to say, "well, can this be done? Is it possible to really take something that takes decades and do it in less than a year?" And we decided, "well yes, it probably can be done, but here's what has to happen."

One of the key elements to the success for delivering a vaccine in record time is we have a platform for developing vaccines and it's the mRNA platform developed with our colleagues at BioNTech.

mRNA is the material that codes for translation to proteins, so what we're doing is we're exploiting that very fundamental part of nature to make a vaccine by inserting mRNA that codes for the protein of interest, in this case, the spike protein that's responsible for that virus attaching to human cells, gaining entry, replicating itself and producing disease.

And so at the beginning, it was unclear whether or not, should we focus our energy really on that very tiny part of the spike protein, the receptor binding domain, the business end, if you will, of the spike or is it more important to take the entire spike protein?

Once we had those candidates in hand and once we'd proven that it was safe to move into human clinical trials, we then looked at them in parallel so that we had more than one shot on goal.

The other key ingredient was the idea to make the bold move, to take the risk of manufacturing the vaccine at scale before we had any idea about whether it would work. Without cutting any corners, we made a bet that the science is going to bear fruit.

And so, when we administered the vaccine beginning in phase 1 and all the way through vaccine development, we monitored the participants in the trial incredibly closely.

And that's how the BNT162b2 construct emerged victorious and became the basis for moving forward into later phase trials.

This is when we say, "Alright, we're now confident enough that we can expand this to larger populations."

We did that until we had enough cases that we felt we could be confident and say, "Ok, now we can examine the total number of cases and determine whether the vaccine is likely to work."

And then we, from Pfizer, gather with an independent data monitoring committee or DMC. They have the capability to look at this blinded data in an unblinded fashion and then they shared that information with us.

And this was the first opportunity to see whether there was likely to be hope for the United States and the rest of the world.

And so, it was a tremendous relief when everybody gathered and all of a sudden the smiles broke out and they said, "we highly recommend that you seek FDA approval for emergency use authorization.

This is a watershed moment that will pay dividends for not only a circumstance where we might encounter another novel pathogen in the future, but even now for the typical sorts of vaccines that we're working on. I mean, all of the COVID-19 work was going on while still in the background, we're still developing vaccines for other important pathogens.

You know, I've told my team that at first we were inspired by hope and now we're inspired by reality. If you bring critical science together, talented team members together, government, academia, industry, public health officials, you can achieve what was previously the unachievable.

And I think the one thing that I hadn't fully come to appreciate until I received the vaccine myself is the sense of profound relief.

I and my wife have felt like we've been living on borrowed time. As bad as it might be for us because we're older, our biggest concern was my disabled son, and I can't begin to tell you… how personally gratifying it was to think, "okay, I've done something to protect him," and then I thought about this magnified - all the people that are getting this sense of relief when they get vaccinated. Again that there's really hope for the future and for themselves and that we get out of our cocoons ultimately. Just extraordinary.

NARRATOR: You should not get the Pfizer-BioNTech COVID-19 Vaccine if you had a severe allergic reaction to the vaccine or any ingredient of the vaccine.