A new poll from YouGov.com indicates that young Americans are more likely to accept non-monogamous relationships than their elders. Nearly a fifth of people under 30 had some kind of sexual activity with someone else while their partner knew about it. This is not to say that the youngsters are rejecting monogamy outright, as 56% of them still think it’s the only way to go. That number rises to 74% for people between 45-64 and 78% in folks 65+.

Perhaps this is not very surprising as people under 30 are less likely to be married and are still looking for a partner. It’s even less surprising once you consider the rise of what has been described as “hookup culture”, courtesy of the proliferation of apps like Tinder, which streamline the process of finding a temporary sexual partner.

Notably, the median age for marriage in 1970 was 21 for women and 23 for men. By 2010, that’s risen to 27 and 29, respectively. Marrying later certainly increases the opportunity for premarital sexual encounters. On the larger scale, a bit over half of Americans are not married at all, so that creates quite a few singles. 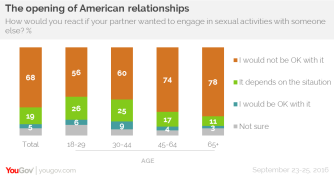 Again, younger Americans are more likely to cheat, with 17% of under-45s reporting such activity, while only 3% of over 65s admitted to having sex with someone without their partner’s knowledge. This last statistic can also be explained by generational mores. It’s likely the older folks aren’t as open about such behavior as the much more open younger generation, which grew up in the era of social media and reality TV. 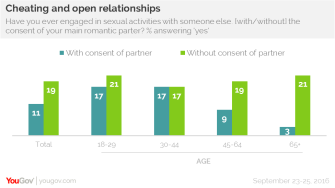 If you are in a non-monogamous relationship, what rules should you follow to make it work for you? Certainly, each situation is different, but research has shown that key components of what’s being called “ethical non-monogamy” should be trust and communication.

Without honesty, such a relationship is just cheating, and openness can go a long way towards defining the boundaries of what is acceptable to you and your partner. Non-monogamous partners are less likely to experience jealousy if the situation is properly discussed. They know that what their partner finds in another relationship (especially if it’s merely sexual) may be the kind of fulfillment they are not willing or able to provide.

One of the best-known allegorical depictions of love has a rather pessimistic male twin.
Health

Cancer cells seem to have a harder time growing among pair-bonded mice, according to a new study that explored the “widowhood effect.”
The Present

Two-thirds of romances start out as friendships.
Up Next
Smart Skills

Where Does the USA Rank In Empathy Worldwide?

We’re ranked behind Saudi Arabia and Korea in empathy. Surprised?