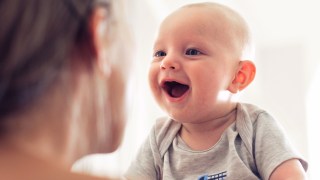 Thanks Mom: How your mom swaddled, worked, and fought the clock for you

Your mother most likely went through a lot to raise you when you were a baby... including getting some of the worst sleep of her life.
▸
3 min
—
with
Lauren Smith Brody

Your mother most likely went through a lot to raise you when you were a baby… including getting some of the worst sleep of her life. According to Lauren Smith Brody, a pregnancy rights activist and founder of The Fifth Trimester, most mothers of infant children don’t get a solid night’s sleep until 7 months in. In America, unfortunately, there is no law for paid pregnancy leave and many women are back to work after only 8.5 weeks. Lauren advocates for a more lenient policy, one that benefits both the mother and the company. Lauren’s latest book is The Fifth Trimester: The Working Mom’s Guide to Style, Sanity, and Success After Baby

Lauren Smith Brody: Fifth Trimester is actually a term that I came up with after experiencing my own.

So you guys know what the first through third trimesters are, that’s pregnancy.

The fourth trimester is something I experienced when I had a newborn baby. I didn’t know about it until then, but it’s this idea that newborn babies do better when they feel like you’re recreating the womb for them because humans are actually born a whole trimester too early; so you shush them and you swaddle them tightly and you make them feel cozy as if they’re still inside you. And I remember hearing about that, and the advice I got was, “Just get to the end of 12 weeks and your baby will wake up to the world and be so happy and engaged and give you something back and get on a schedule.”

And I thought, “Well, god, that’s exactly when I go back to work.”

And so I realized that there’s actually an additional trimester – it’s a fifth trimester, and it’s when the working mom is born.

Emotionally, women want their work to have more meaning in this moment than it has before, which, the job mau not have changed, but your internal compromises that you're making for being there do, so you want to see more value in it, and it can be a very loaded time. Of course, we haven't even talked about sleep deprivation. But the women I surveyed were, on average, I asked them when they were sleeping through the night.

So they reported sleeping through the night—mom’s sleep, not baby’s sleep, but mom’s sleep of a steady seven hours straight—at about the seven month mark on average.

So that just shows you, if we know that FMLA in the United States which is only available to 56 percent of the country anyway, that if that allows for 12 weeks of unpaid leave—many, many people can’t even afford to take obviously a quarter of their year unpaid—We know that most American women are back at work, the average I think is about 8.5 weeks. So they’ve been back at work months and months without sleeping.

And the approach that I took with the research that I looked at for sleep was not about baby’s sleep, it was really about mom’s sleep. About how does sleep deprivation impact the mother, and what can you do to protect the little sleep you’re getting and also to make sure that you’re gaming your day in a way that, if you are sleep deprived, how do you protect yourself at work from feeling more emotionally raw?

One of the sleep scientists I talked to is fascinating, said that she tells new mothers that if they’re coming back to work, “If you have two bad nights of sleep in a row and you show up at work you’re showing up at work at 9:00 a.m. as impaired as if you were drunk.”

And these are my words, not hers. This is not your roommate in college who you can roll on her side and give her a glass of water and have her sleep it off. No. You have to work your day at work. And then, by the way, go home to your second shift at night and keep a human baby alive and do a good job at that too. So it’s a lot.