The stress of executing space missions could cause dormant viruses to reactivate within astronauts, suggests a new study led by NASA.

The study, published in the journal Frontiers in Microbiology on February 7, analyzed samples of saliva, blood, and urine obtained from astronauts before, during, and after 10- to 16-day space flights and long-term missions aboard the International Space Station.

“To date, 47 out of 89 (53 percent) astronauts on short space shuttle flights, and 14 out of 23 (61 percent) on longer ISS missions shed herpes viruses in their saliva or urine samples,” said lead study author Dr. Satish K. Mehta at Johnson Space Center. “These frequencies — as well as the quantity — of viral shedding are markedly higher than in samples from before or after flight, or from matched healthy controls.”

Shedding occurs when herpes successfully reproduces and leaves the host cell, whereby it could potentially infect another person. The process can occur without any noticeable symptoms. This — combined with the fact that the herpes simplex virus cleverly conceals itself in the central nervous system where the immune system can’t eradicate it — helps explain why about two-thirds of people worldwide have some form of herpes.

“Only six astronauts developed any symptoms due to viral reactivation,” Mehta said. “All were minor.” 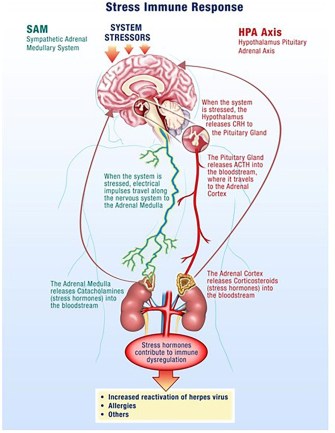 Astronauts face a unique set of stressors in space that seem to hinder the immune system’s ability to keep viruses dormant. The study shows that space missions seemed to reactivate at least four types of the herpes virus within astronauts. Alarmingly, these reactivation rates increased as astronauts spent more time in space.

“NASA astronauts endure weeks or even months exposed to microgravity and cosmic radiation — not to mention the extreme G forces of take-off and re-entry,” Mehta said. “This physical challenge is compounded by more familiar stressors like social separation, confinement, and an altered sleep-wake cycle.

“During spaceflight there is a rise in secretion of stress hormones like cortisol and adrenaline, which are known to suppress the immune system. In keeping with this, we find that astronauts’ immune cells — particularly those that normally suppress and eliminate viruses — become less effective during spaceflight and sometimes for up to 60 days after.”

What’s more, the researchers wrote that more than one virus generally activates at a time, potentially compounding the risks the viruses pose, including “not only rashes, but also severe target organ failures, and permanent vision and hearing loss.”

It’s a major concern for space agencies looking to send astronauts on long-term missions to Mars.

“Ultimately, the information gleaned from these space studies will shape the way we prepare for and design exploration-class missions, beyond the moon and mars, where reactivation of latent viruses could result in increased risk for wide-ranging adverse medical events.”

​Herpes and the general public

As with astronauts, stress can cause herpes outbreaks and shedding among everyday people.

Although researchers are searching for a cure, none currently exists for the eight strains of herpes virus, which include chicken pox and shingles, in addition to what’s commonly called oral (HSV-1) and genital (HSV-2) herpes.

“Herpes lives in your system dormant forever. It’s kind of like a sleeping bear: When you get stressed out, the bear is mustered out of hibernation,” Gohara said.

Ancient humans may have evolved to slumber efficiently — and in a crowd.
Up Next
Health

A new method of growing mini-brains produces some startling results.