Of all the dietary trends, superfood cleanses, high-intensity workouts, fad pills and powders, and metabolic superstar programs guaranteeing weight loss, one tried and true method continues to be a sound means for maintaining a healthy weight: reducing your calories.

A Cornell study, published in August, has discovered that restaurants that list calorie content help customers moderate the amount of food they consume — albeit, by a little. Still, a little can go a long way once you become accustomed to it.

The research team of John Cawley, Alex Susskind, and Barton Willage set up shop in two restaurants for a randomized field experiment. Two different groups were then told to order: a control group with normal menus and a treatment group, which read from menus featuring calorie information. By the end, 5,500 diners contributed to the study.

The treatment group ended up ordering 3 percent fewer calories than the control group — a result of 45 calories per meal. The biggest effect seems to be on consumer awareness. The researchers noted that customers were surprised by how many calories basic meals, such as a tomato soup/grilled cheese combo, has. They continue,

The findings come at a time when most Americans don’t have a precise estimate of how many calories they’re eating, because one-third of their food is prepared outside the home. At the same time, the obesity crisis in America has reached epidemic proportions; the prevalence of obesity in adults has nearly tripled in the past 50 years, to nearly 40 percent of the population in 2016.

This follows a law requiring chains with 20 or more locations to post calorie content on menus and menu boards, which went into effect earlier this year. The move was set to launch in 2011 as part of the Affordable Care Act’s requirements, yet pushback from lobbying efforts delayed its implementation.

Part of the gripe from restaurant chains (especially pizza establishments) is that it will reduce profits. Yet in the Cornell study researchers found no evidence of monetary loss between the groups. In fact, healthier options often cost more than junk food. That said, patrons realizing which restaurants are not healthy could have a ripple effect. Though the Cornell study is an outlier — other studies have found that the calorie content does not change minds — it might be pushing restaurants to offer more low-calorie options. 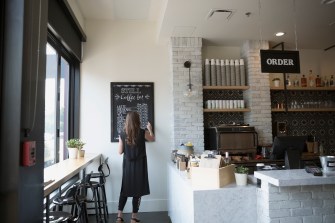 The cost to restaurants does not nearly equate to those on our medical infrastructure. According to the CDC, obesity is costing the U.S. $147 billion each year. This involves direct and indirect medical problems related to being overweight, including cardiovascular disease, type 2 diabetes, immune system-related problems, and many other ailments.

John Cawley, a professor of policy analysis and management in the College of Human Ecology at Cornell, views the calorie listing on menus as an easy to implement solution.

It’s a cheap policy to put in place, and the fact that there is a reduction in calories ordered makes it appealing.

While not the only solution, it’s a step in the right direction. Awareness is a catalyst for change, and one thing is certain: we can’t keep heading blindly in the direction we’ve been going. The consumption of unhealthy high-calorie foods, beginning with the frozen dinner revolution of post-World War II America right up through pumpkin spice lattes, has made us a sick and diseased nation. Every calorie counts.

Eating veggies is good for you. Now we can stop debating how much we should eat.
Health

From baboon hierarchies to the mind-gut connection, the path to defeating depression starts with understanding its causes.
▸
23 min
—
with
Big Think
Health

A new study finds that dogs fed fresh human-grade food don’t need to eat—or do their business—as much.
Up Next
Life

To save ourselves, half of Earth needs to be given to animals

We’re more dependent on them than we realize.