If the appendix has a jam, it’s definitely the Clash’s Should I Stay or Should I Go. The organ always tease, tease, teases us with the possibility of appendicitis, an inflammation that is potentially life threatening if left alone. This said, since the appendix has long been touted to serve no known function, surgeons will even remove it as part of near any routine surgery. “While I’m in there, amiright?”

But that view has changed in recent years. New discoveries have led medical professionals to reassess the role of the appendix. Some experts believe it has an important role to play in our immune system, while others suggest a more sinister role. 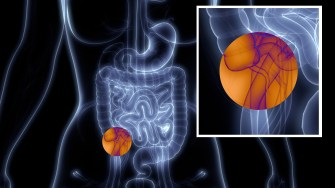 The appendix is a pinky-sized organ located at the junction of the large and small intestine. Image source: Shutterstock

For years, the medical profession believed the appendix was a vestigial organ — that is, it served a functional purpose in our evolutionary ancestors but has since lost that role. Goosebumps, for example, made our ancestors look larger and more intimidating, but they serve no function in the era of the full-body wax.

Similarly, scientists have posited that the appendix aided digestion in our leaf-noshing ancestors. Charles Darwin hypothesized humans once possessed a large cecum that stored special gut bacteria used to break down fibrous plant tissue. As our ancestors moved toward more easily digestible foods, such as fruit, our cecum began to shrink. The appendix, he wagered, was part of the cecum that shriveled to uselessness.

Today, the appendix loafs about in our abdomens, freeloading at the junction of your large and small intestines, where we pay little attention to it unless it becomes inflamed due to blockage or infection. Seeing as the appendix plays no known role, the response to such inflammation is simply to remove it, a procedure called an appendectomy.

A new study, however, suggests that appendectomies may pay dividends beyond curing appendicitis.

Whose side is the appendix on?

Published this fall in Science Translational Medicine, the study compared the health records of nearly 1.7 million Swedes over 52 years. It found that Swedes who underwent an appendectomy decreased their chance of developing Parkinson’s disease by roughly 20 percent compared to the general population. A removed appendix also appeared to delay the onset of Parkinson’s.

The culprit is not the appendix, per se, but the Lewy bodies it houses. Lewy bodies are abnormal deposits of alpha-synuclein proteins. When these proteins accumulate in neurons, they affect the brain’s biochemical processes, leading to neurodegenerative diseases such as Parkinson’s disease and Lewy body dementia. Scientists aren’t sure how Lewy bodies alter the brain, but they do know these protein clumps appear in the gut before disease onset.

When the researchers analyzed appendix tissue from people who underwent an appendectomy, but were not diagnosed with Parkinson’s, they found the tissue “contained high levels of intraneuronal alpha-synuclein aggregates” and was rich in truncated forms of the protein. This discovery strengthens the case that these protein clumps travel from the gut to the brain.

As neuroscientists Viviane Labrie told Science News, “[P]reventing excessive alpha-synuclein clump formation in the appendix, and its departure from the gastrointestinal tract, could be a useful new form of therapy.”

Interestingly, the study found that an appendectomy showed the greatest benefits for Swedes living in rural areas. Rural living is associated with a higher risk early onset Parkinson’s, but the research suggests that an appendectomy decreased the risk of Parkinson’s for countryfolk by about 25 percent compared to the general population. 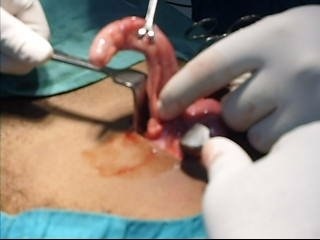 An inflamed appendix being removed during an appendectomy. Image source: Wikimedia Commons

But let’s not rush into your doctor’s office and demand she remove your appendix. Not just yet.

While the study is eye opening, it does have some limitations. First, the study only looked at the appendix, so the authors are not sure what other gastrointestinal tissues may contain alpha-synuclein and what role that may play. Additionally, undetermined genetic and environmental factors may play significant roles, too.

And the appendix may yet be shown to provide salubrious benefits, as well. One study out of Midwestern University “discovered that the appendix has evolved independently in several mammal lineages, over 30 separate times, and almost never disappears from a lineage once it has appeared.” The researchers believe this is strong evidence for an adaptive purpose.

Going back to Darwin, that adaptive purpose may be to safe house gut bacteria. A study published in the Journal of Theoretical Biology argues that immune system cells in the appendix protects good bacteria during trying abdominal circumstances.

For example, a gut can’t differentiate between good and bad bacteria when it purges the system with a bout of diarrhea. During this time, the appendix houses good bacteria like an intestinal Noah’s Ark. Once the inner, ahem, flooding has subsided, the good bacteria go forth to repopulate the gut.

Even if this theory is correct, people still live long and fruitful lives without an appendix, so the question that needs further research is whether the benefits of keeping your appendix outweigh the risks of keeping it.

Should the appendix stay or should it go? The answer, according to science, seems to be that if it goes there could be trouble, but if it stays, it may be double.

Tags
agingbraincognitive sciencediseasehealthhuman bodymedical researchmental health
In this article
agingbraincognitive sciencediseasehealthhuman bodymedical researchmental health
Related
Health
New blood types are often discovered following medical disasters
New blood types are regularly discovered by an unusual absence or an unusual presence — both of which can result in tragedy.
Neuropsych
How you breathe affects your brain
Your breathing rhythm influences a wide range of behaviors, cognition, and emotion.
Health
What happens when regular porn watchers abstain for a week?
Researchers watched for signs of withdrawal — but didn’t find any.
Health
COVID, RSV and the flu: A case of viral interference?
Viruses, it turns out, can block one another and take turns to dominate.
Health
What decades of research tells us about living the good life
Warm relationships protect your mind and body from the slings and arrows of life.
Up Next
The Present
California wildfires death toll climbs to 50
Firefighters in California are still struggling to contain several wildfires nearly one week after they broke out.