Michael Gershon is a professor of pathology and cell biology at Columbia University. Dubbed “the father of neurogastroenterology,” his classic book, “The Second Brain,” introduced the world to the enteric nervous system—a “third” nervous system that governs the space between our esophagus and anus. His research on GI physiology has transformed the field and prepared the entire planet to better understand the importance of the microbiome.

In short, he’s an irreplaceable scholar.

In 2001, Gershon was shown clinical test slides from an intriguing three-year-old study published in the journal, The Lancet. Only something wasn’t panning out. The study claimed that the measles virus—specifically, a strain of the measles virus from the measles, mumps, and rubella (MMR) vaccine—made the gut wall leaky. Gershon said if that was the case, it should be leaky in both directions, which was not reported.

That wasn’t the only issue. The study also claimed opioid peptides were being released from the gut into the bloodstream, yet similar-sized peptides would also be released if that were the case. Strike two.

Finally, there was a charge that particular foodstuffs penetrated the brain’s blood-brain barrier in the 12 children involved in the study. That would imply these substances evaded the liver, which Gershon found unreasonable. The study, he concluded, was trash.

Or, as it turns out, the research was completely fabricated to push an agenda. Investigative journalist Brian Deer is the reason The Lancet eventually retracted that infamous study. Deer’s tireless journalism exposed the fraudulent team, led by an incredulous (now former) doctor, that put the notion that vaccines cause autism into widespread circulation.

While Andrew Wakefield’s study was engineered for monetary gain, the myth of vaccine dangers, which has morphed from autism to QAnon-level conspiracy, persists. Deer’s new book, “The Doctor Who Fooled the World: Science, Deception, and the War on Vaccines,” compiles nearly two decades of reporting that details Wakefield’s every sinister move.

Brian Deer on the media’s role in vaccine scareswww.youtube.com

Gershon realized the slides were likely contaminated in the laboratory. He wasn’t the only one. Science has long suffered from the “replication crisis“—many studies come to a conclusion that cannot be replicated upon further research. Not only did future research fail to confirm Wakefield’s research, the doctor balked when his research institution, Royal Free Hospital School of Medicine, offered a large sum of money to conduct a follow-up study. If Wakefield’s work was sturdy, it would have held up.

Wakefield never even tried. Instead, he turned to an increasingly popular trick when your data fails: let the media do your work for you. Science is hard and expensive. Clickbait, cheap and addictive.

The actual data is mind-boggling. The 12 children in the original study were handpicked, which is antithetical to clinical research. Wakefield falsified the results from pediatricians. He used microscopic-level stains; a more reliable molecular method found nothing. The parents of study subjects, some with their own agendas (such as litigation), kept changing the timeline of their child’s conditions—some children showed symptoms of autism before the MMR vaccine was given while others claimed symptoms started hours after injection when previous reports state that it was months. While Wakefield was raging against the vaccine, he filed for two patents on single measles shots.

Every chapter drops your jaw. Consider this example to better understand the myth of vaccine-created autism. On July 20, 2005, Wakefield, with support from anti-vaxx congressman Dan Burton, spoke at the National Mall. The event was a rally against the vaccine ingredient, thimerosal, which itself is a red herring: thimerosal was removed from almost all vaccines in 1999, yet autism cases continued to rise. 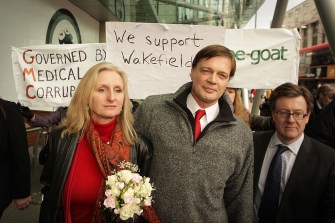 Wakefield read a statement from a UK newspaper apologizing after the former doctor brought a defamation suit. By this point, Deer had published numerous groundbreaking stories in the Sunday Times (circulation: 1.2 million). A tiny local newspaper, the Cambridge Evening News (circulation: 5,000), had reprinted two sentences from Deer’s coverage. Instead of bringing Deer to court (which he would do later, unsuccessfully), Wakefield sued the fragile paper in eastern England, which did not have the resources to defend itself.

No one on the Mall that day understood the specifics. They weren’t told the backstory. All they heard was that Wakefield was vindicated, for which they cheered.

Every schtick has a shelf life. Deer details the increasingly absurd stakes of Wakefield’s career: measles causes Crohn’s disease; the MMR vaccine causes autism; all vaccines are suspect. Over the course of two decades, the disbarred doctor chased money wherever it led, taking a willing media along with him. His efforts culminated in the 2016 pseudoscience documentary, “Vaxxed.”

Actions have consequences. Andrew Wakefield saw opportunity in vaccine-resistant parents. At first, he filed for his own single-jab measles vaccine—at the time, the demon was supposedly the triple shot MMR—but he wasn’t fully aware of what lurked inside of this Pandora’s box. Wakefield was paid hundreds of thousands of dollars to fabricate the study, as Deer’s reporting shows. A long game hadn’t yet been imagined.

Twenty-two years later, during the worst pandemic in a century, 35 percent of Americans claim they will not take an FDA-approved, free COVID-19 vaccine, according to a Gallup poll. The science community called Wakefield’s research out for what it was, yet by manipulating the media—more forcefully, social media—the “doctor with no patients” has made a large percentage of people skeptical of one of the best therapeutic interventions ever devised. The cost, if and when a COVID-19 vaccine is developed, will be high.

Never say one man cannot change the world. And never think that change is always for the better.

The risk of dying basically flattens after age 110.

A new study found that people who scored high in certain psychopathic traits are more likely to limit head movements.