Picture Earth in your mind. Chances are what you’re imagining is a blue marble gracefully pirouetting through space on its axis. It’s a model we’ve grown accustomed to by way of movies and classroom globes. It’s hardly a realistic representation, though.

While the Earth is round, it’s not a perfect sphere but rather an oblate spheroid mass. It also doesn’t rotate along a resolutely straight spin axis. Instead, it drifts, wobbles, and tilts along its orbit like a solar partygoer, one who’s just on the fun side of squiffy.

Scientists have long known that the Earth wobbles on its spin axis, but a new study has shown that the Earth’s drift has increased over the last century and identifies three major causes: glacial rebound, mantel convection, and the melting of ice mass.

And wouldn’t you know it? We’re partially to blame for that last one. 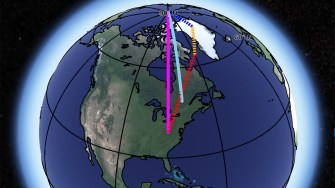 The light blue line represents the observed direction of polar motion. The pink line is the sum of the influences of glacial rebound (yellow), mantle convection (red), and Greeland ice loss (blue) on Earth’s rotation.

The paper, titled What Drives 20th Century Polar Motion?, was published in Earth and Planetary Science Letters and brought together scientists from NASA’s Jet Propulsion Laboratory (JPL), the German Research Centre for Geosciences, the Geological Survey of Denmark and Greenland, and other organizations.

The study looked at observational and model-based data from the 20th century to determine what caused the increased wobble or, more technically, polar motion.

“The traditional explanation is that one process, glacial rebound, is responsible for this motion of Earth’s spin axis. But recently, many researchers have speculated that other processes could have potentially large effects on it as well,” Surendra Adhikari, the study’s first author and an earth scientist at JPL, said in a press release.

The study found glacial rebound an important factor in explaining Earth’s rotational wobble. According to the release, heavy glaciers depressed Earth’s surface during the last ice age, their weight pushing the land deeper into the surface. As the ice melts, the land rises back to its original position. Think of it as memory foam on the geologic scale. Like the memory foam, Earth’s mass redistributes itself and this causes changes in the planet’s rotation.

However, the researchers found that glacial rebound is only one of three important factors. The second is mantle convection, a geophysical process that involves the planet’s core heating up the mantle. Convection currents carry the hotter, less dense liquid rock up from the lower mantle, while dragging the denser rock of upper mantle and lithosphere back down. This constant flow of geologic material is driving force of plate tectonics, volcanic activity, seafloor spreading, and so on. 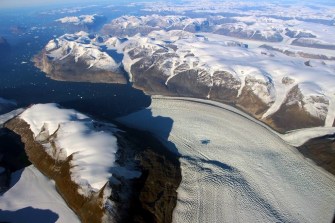 Rink Glacier in western Greenland forms a meltwater lake in its center.

The glacial motion into the ocean

This is where we come in. The researchers argue that there is another factor greatly influencing Earth’s polar motion and its contemporary drift. What is it? The 20th-century reduction of the global cryosphere. In particular, Greenland’s ice melt is having the largest impact due its location on the planet.

Erik Ivins, co-author and senior research scientist at JPL, explains: “There is a geometrical effect that if you have a mass that is 45 degrees from the North Pole — which Greenland is — or from the South Pole, like Patagonian glaciers, it will have a bigger impact on shifting Earth’s spin axis than a mass that is right near the Pole.”

As temperatures have increased throughout the 20th century, Greenland’s ice mass has diminished significantly. As the press release notes, about 7,500 gigatons of Greenland’s ice melt — a weight of more than 20 million Empire State Buildings — has found its way into our oceans. As this ice mass continues to melt and diffuse across the planet, it will further affect the drift of Earth’s spin not to mention sea levels.

These three main factors — glacial rebound, mantle convection, and ice melt — have altered the planet’s spin axis. But by how much? In total, the paper shows that Earth’s rotation drifts about 10 centimeters per year. During the 20th century, this resulted in a shift of about 10 meters.

Writing for Forbes, geologist Trevor Nace points out that this difference isn’t significant enough to effect ecosystems, and we can account for any navigational impacts it may have with modern technology.

Earth’s rotational wobble won’t bring about an extinction event, but understanding its cause is nonetheless important. This research gives us further insight into how human activity can alter the planet on a global scale. While we tend to talk about throwing the planet off balance, this time it is literally true.

Water is vital for life. Luckily for spacefaring humans, the solar system is full of it.
Up Next
Culture & Religion

New Ken Burns documentary models what American healthcare could be

It should get people talking …