In 2008, NASA’s Phoenix lander directly confirmed the presence of water ice on Mars. It wasn’t exactly a surprise. Satellite imagery had previously suggested that, approximately 4 billion years ago, the red planet was flush with lakes and rivers.

But what’s long puzzled scientists is how water developed on what’s now a cold, dry planet. To support those ancient lakes and rivers, Mars would have needed an atmosphere that produced sufficient warming through the greenhouse effect. The planet’s atmosphere is too thin today to produce such warming.

One hypothesis for how Mars once supported water posits that an asteroid collided with the planet, and the resulting heat enabled liquid water to exist. But some researchers have noted that this heating effect would have only lasted a couple years. That wouldn’t have been long enough for water to leave the visible geological evidence of lakes and rivers we see today.

A new hypothesis for water on Mars

New research published in PNAS explores another hypothesis: Mars once had icy, high-altitude clouds, similar to cirrus clouds on Earth, that created a greenhouse effect capable of supporting a lake-forming climate.

First proposed in 2013, this explanation has been criticized because it would have required Mars to have had clouds with unusual properties. Specifically, water would have had to stay trapped within clouds for much longer periods of time compared to Earth’s water cycle. The recent study sheds new light on how these unusual clouds might have formed and warmed the planet. 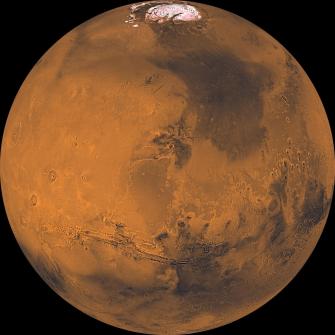 In previous versions of the cloud-greenhouse hypothesis, researchers had assumed that large swaths of the Martian surface were covered with ice. Such conditions would have prevented high-altitude clouds from forming. But if the surface had less ice, a layer of high-altitude, icy clouds could have formed.

“The distribution of surface water affects the height of the clouds. If there is surface water everywhere on the planet, then the relative humidity will be ~1 in updrafts, and clouds will form at low level in those updrafts. However, if surface water is only found in cold places, most of the surface is warmer than the cold traps, and so low-level clouds can’t form over most of the surface (higher temperatures –> lower relative humidity –> no condensation –> no clouds). High up in the atmosphere, temperatures are lower and so clouds can form.”

To explore how different amounts of surface water and clouds would have affected the planet, the researchers created a computer model of early Mars. The model represented a planet that was mostly dry but with patches of ice at some locations, like on mountaintops and at the planet’s poles. Above these “cold traps,” clouds would have formed at low altitudes.

But above the rest of the planet’s warmer and drier areas, the researchers noted that “clouds are found only at high altitudes” because the lifting condensation level (LCL) is high. (LCL refers to the height at which an air parcel has cooled enough to become saturated and form clouds. Compared to air near cold traps, air near warm surfaces needs to rise higher to cool enough to form clouds, so it has a higher LCL.)

So, why does cloud height matter in terms of warming?

“Clouds absorb infrared emitted from the ground and then re-emit it to space (purple arrows; greenhouse effect),” Kite told Big Think. “Planetary energy balance requires that energy in (absorbed sunlight) equals energy out (infrared emitted to space). If the clouds have the right particle size and thickness to effectively absorb infrared, this means that the cloud-top temperature is constant for a given amount of absorbed sunlight.”

Although the model fits with scientists’ current understanding of ancient Mars, the researchers said the results don’t definitively rule out the collision hypothesis. But NASA’s Perseverance rover could soon settle the debate by analyzing samples of Martian rocks, giving scientists insight into the atmosphere of early Mars, and, more broadly, what makes planets habitable.

“Mars is important because it’s the only planet we know of that had the ability to support life — and then lost it,” Kite said in a press release. “Earth’s long-term climate stability is remarkable. We want to understand all the ways in which a planet’s long-term climate stability can break down — and all of the ways (not just Earth’s way) that it can be maintained. This quest defines the new field of comparative planetary habitability.”

We’ll never be able to extract any information about what’s inside a black hole’s event horizon. Here’s why a singularity is inevitable.
Up Next
Health

In the near-term, gene editing is not likely to be useful. Even in the long-term, it may not be very practical.