The following is an adapted excerpt from the new book CRISPR People, reprinted with permission of the author.

The most obvious potential benefit would be to edit embryos, or the eggs and sperm used to make embryos, to avoid the births of children whose genetic variations would give them a certainty or high risk of a specific genetic disease. And here it is time to explain the ways genetic diseases or other traits get inherited. If the disease or trait depends on just one gene, we call it a Mendelian condition or trait, named after Gregor Mendel, the Austrian monk who first discovered this kind of inheritance. If more than one gene is involved, we cleverly call them non-Mendelian conditions or traits. Most of the discussion below is about Mendelian conditions for the simple reason that there is more to say about them.

Mendelian conditions can largely be put into five main categories, depending on where the relevant DNA is found and how many copies of the disease-causing variant are needed to lead to the disease: autosomal dominant, autosomal recessive, X-linked, Y-linked, or mitochondrial. Autosomal dominant diseases require only one copy of the disease-causing genetic variation; autosomal recessive diseases require two copies, one from each parent. X-linked diseases typically require two copies in women (one from each parent) but only one in men (who have only one X chromosome, always inherited from the mother). Y-linked diseases, which are unusual, are found only in men and require only one copy — because only men have a Y chromosome and normally they have only one copy of it. Mitochondrial diseases are inherited only from the mother and any mother with the disease will necessarily pass it on to all her children.

Why take the new, riskier — and, to many people, disconcerting — path of gene editing rather than just selecting embryos?

So, if an embryo has 47 CAG repeats in the relevant region of its huntingtin gene, it is doomed (if born) to have autosomal dominant Huntington’s disease. One might use germline editing to reduce those 47 repeats to a safe number, of under 37, and thus prevent the disease. Or if an embryo has two copies of the genetic variation for the autosomal recessive Tay-Sachs disease, it could be edited so that the embryo had one or no copies and would be safe. The same is true of X-linked, Y-linked, or mitochondrial diseases.

If this is safe and effective, it may make sense. But another technology that has been in clinical practice for about 30 years is known to be (relatively) safe and effective and can do the same thing — PGD [preimplantation genetic diagnosis]. PGD involves taking one or a few cells from an ex vivo embryo, testing the DNA in those cells, and using the results to determine whether or not to transfer that particular embryo to a woman’s uterus for possible implantation, pregnancy, and birth. The first PGD baby was born in 1990. In 2016, the last year for which data are available, the U.S. Centers for Disease Control and Prevention (CDC) reported that about 22 percent of the roughly 260,000 IVF cycles performed that year in the United States involved PGD (or a version called preimplantation genetic screening, or PGS). That was up from about 5 percent the year before. Anecdotally, from conversations with people working in IVF clinics, it sounds as though PGD or PGS usage in 2019 may well be above 50 percent, at least in some areas of the United States.

If a couple wants to avoid having a child with a nasty Mendelian genetic disease or condition, they could, in a decade or more, use CRISPR or other gene-editing tools to change an embryo’s variants into a safer form or, today, they could use PGD to find out which embryos carry, or do not carry, the dangerous variants. For an autosomal recessive condition, on average 25 percent of the embryos will be affected; for an autosomal dominant one, 50 percent will be. Even for dominant conditions, if one looks at 10 embryos, the chance that all 10 will have the “bad” version is one in 1,024. If you have 20 embryos to examine, it becomes one in 1,048,576.

So, why take the new, riskier — and, to many people, disconcerting — path of gene editing rather than just selecting embryos? 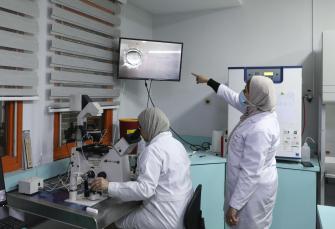 Somatic cell therapy does not change the germline, and it comprises a technology much closer to being shown safe and effective than human germline genome editing. Arguably, the fact that the change is only being made in one or a few of the many tissues of the body would improve its safety over a change that exists in every cell, including cells where a particular off-target change has harmful effects.

On the other hand, genome editing of an egg, a sperm, or a zygote needs to change only one cell. This might prove more effective than changing, say, 100 million blood-forming stem cells or several billion lung cells. Furthermore, somatic cell editing would not necessarily work for all conditions. For some, too many different cells or tissues may have to be targeted. For others, the damage may begin before birth, or even before the stage of fetal development where in utero somatic editing becomes plausible. For diseases with very early consequential effects, somatic cell therapy may be inferior to embryo editing or embryo selection.

Even when somatic editing is possible, human germline genome editing retains one advantage: the process would not have to be repeated in the next generation. If somatic editing is used, that person would still have eggs or sperm that could pass on the disease. If she or he wanted to avoid a sick child, PGD or somatic cell gene therapy might be necessary. If germline editing is used, that child’s children will be free from the risk of inheriting the disease from their edited parents. But is this a bug or a feature? It adds a choice — not a choice for the embryo that is, or isn’t, edited but for the parents of that embryo. Somatic cell editing continues the possibility of a disease in the next generation — but allows that generation’s parents to make the decision. One might — or might not — see that as a benefit.

In non-Mendelian (sometimes called multigenic) diseases, no one variant plays a powerful role in causing the disease. Variations in two, or twenty, or two hundred genes may influence the condition. Collectively, those influences might be 100 percent, though the cases we know now add up to much lower certainties. We do not yet know of many good examples, though at least one paper claims to have found strong evidence of that variations of different genes, working together, increase the risk for some cases of autism. And, more generally, we know of many combinations of shared genomic regions that (slightly) increase or lower the risk for various diseases or traits in particular, studied populations. (These have led to the hot area of “polygenic risk scores,” whose ultimate significance remains to be seen.)

The biggest problem with human germline genome editing for non-Mendelian conditions is that we do not know nearly enough about the conditions. We believe that many conditions are non-Mendelian, but how many genes are involved? Which genomic variations add or subtract risk? How do the effects of variations from different genes combine to create risks? In a simple world, they would be additive: if having a particular variation of one gene increases a person’s risk of a disease by 10 percentage points and having a particular variation of a different gene increases that person’s risk by 5 percentage points, then having both would increase the risk by 15 percent. But there is no inherent reason nature has to work that way; the combined effects may be greater or less than their sum. It is even conceivable that having two variations that each, individually, raise a person’s risk might somehow lower the overall risk. We know almost nothing about the structure of these non-Mendelian, or multigenic, risks.

It is clear, though, that, in general, PGD would be much less useful for non-Mendelian diseases than for Mendelian ones. The chances of finding an embryo with “the right” set of genetic variations at five different spots along the genome will be much smaller than of finding an embryo with just one “right” variation. If the odds for any one variation are 50/50, the overall odds for any five variations in one embryo are one in 32. If gene editing could safely and effectively edit five places in an embryo’s genome (or in two gametes’ genomes), it could deliver the preferred outcome. On the other hand, if we can use genome editing to do that in an embryo or gamete, we may well be able to do the same in a fetus, a baby, a child, or an adult through somatic cell gene therapy — unless the condition begins to cause harm early in development, or broadly enough in the body that it needs to be delivered to all the body’s cells.

Right now, there is no non-Mendelian condition for which we are confident we know the exact set of genes involved. Neither do we know the negative and positive effects of different combinations of genetic variants. Until these uncertainties are adequately resolved, human germline genome editing, though in theory better than PGD, will not be safe or effective enough for use. Once they are resolved, in many situations it will be no better than somatic cell genome editing, except for the possible absence of needing to hit targets in multiple tissues or cell types and the absence of a need to repeat the editing for the next generation.

Adapted from CRISPR PEOPLE: The Science and Ethics of Editing Humans by Henry Greely. Copyright 2021. Reprinted with Permission from The MIT PRESS.

Tags
biotechCRISPREthicsgene editinghuman bodymedicine
In this article
biotechCRISPREthicsgene editinghuman bodymedicine
Related
Thinking
Bonhoeffer’s “theory of stupidity”: We have more to fear from stupid people than evil ones
Evil is easy to identify and fight against; not so with stupidity.
Health
COVID, RSV and the flu: A case of viral interference?
Viruses, it turns out, can block one another and take turns to dominate.
Health
Chantix, Trulicity, Xeljanz, and most drugs advertised on TV are of “low therapeutic value”
Close to 70% of drugs advertised on TV offer little to no benefit over other cheaper drugs.
Neuropsych
Shopping with your nose: How body odors influence your buying behavior
Sniffing out a deal.
The Past
Ceramics, corn cobs, and other strange things we used before toilet paper
Some objects were softer than others.
Up Next
Hard Science
The foundations of mathematics are unproven
Philosopher and logician Kurt Gödel upended our understanding of mathematics and truth.