We’ve loudly been broadcasting our presence on Earth out to the broader universe for decades. At first, these attempts were accidental. In Carl Sagan’s book Contact, he speculated that any aliens watching the stars with at least as keen an interest as we do would pick up high-powered television broadcasts — the first of which would have been Hitler’s Nuremberg rallies.

Fortunately, we’ve also been sending more intentional messages into space that E.T. may pay more attention to. These deliberate messages often contain information on our technological advancement; our understanding of mathematics, which is likely the only shared form of communication we would have with an alien species; and our culture and art. Together, they represent how humanity wants to be seen. Here’s a selection of some of the most noteworthy messages we’ve been sending to space in the hopes that somebody is listening.

On November 16th, 1974, we sent a 2,380 MHz radio message pointed at the Messier M13 globular cluster 25,000 light years away. Over the course of its 3 minutes, the radio message sent 1,679 binary digits by shifting the radio’s signal frequency slightly for a 1 or a 0. When visualized, the Arecibo Message looks a little bit like discarded artwork from Space Invaders.

Like most of these messages, we tried to pack as much meaning in as little space as possible. Frank Drake (creator of the famous Drake equation) and Carl Sagan collaborated on what should go into it. From top to bottom, the message contains the numbers 1 through 10, information on the elements in our DNA, their atomic numbers, the nucleotides that constitute our DNA, and the double-helix structure. Below it, we listed the average height of a human, a simple graphic depicting our form, and our population at the time (4.3 billion). Then, there’s a simple model of our solar system, and the last part contains a depiction of a telescope.

It’ll take 25,000 years for the message to reach its destination, so it’s unlikely that we’ll ever know if it made contact. However, its intended purpose was rather to demonstrate our capability; the possibility of contact is just the cherry on top. The Voyager Golden Records prior to being affixed to the Voyager probes.

Probably the most famous communication attempt on this list, the Voyager Golden Records were contained inside the two Voyager probes launched in 1977. Once again, the contents were selected by Carl Sagan and a committee he helmed.

The records contain instructions on how they should be played. If aliens get past that step, they’ll be greeted by the sounds of planet Earth, like wind, thunder, and whale and bird song. They’ll also hear spoken greetings in 55 different languages, music from different cultures, footsteps, and Sagan’s laughter.

The Golden Records also contain instructions for how to produce images from their contents. These depict people eating, planets in our solar system, locations on Earth, animals, insects, human evolution and physiology, and chemistry-related images.

The most interesting component, though, is the hour-long recording of a human’s brainwaves; specifically, Sagan’s wife, Ann Druyan. While her brain was being recorded, Druyan thought of a variety of topics, like Earth’s history and — having just gotten engaged to Carl Sagan — the experience of falling in love.

The Voyager probes were primarily meant to observe our solar system as they passed through, but they will be floating through space for quite some time. Maybe some aliens will have the opportunity to see how Druyan felt about falling in love or hear the many sounds from Earth we included. You can listen to the Golden Record’s audio recordings on Soundcloud here and here. 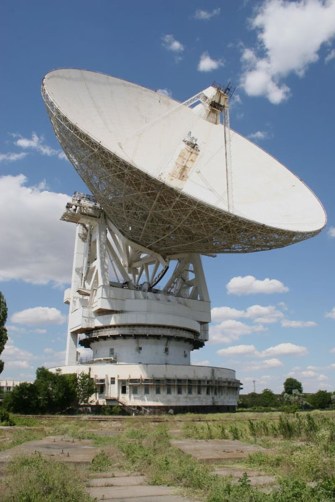 This message was initially proposed to be sent via the Arecibo Observatory, the same radio telescope used to send the Arecibo Message, but was rejected over growing concerns that maybe it isn’t such a hot idea to broadcast humanity’s presence in the universe. The Dark Forest theory states that the reason why the universe appears empty is because all other alien life is hiding out fear of other, hostile civilizations — sending messages out to the stars has always been a contested proposition because of our ignorance about the friendliness of alien life.

But human perseverance and our desire to make contact with others has usually won out, and the Teen Age Message was eventually sent out from the Yevpatoria Planetary Radar in 2001. Alexander Zaitsev, the project’s leader, described his conception of the message:

In an attempt to make “space art,” the Teen Age Message contained the first live recording of a theremin concert for aliens. Seven songs were performed, and the total message was sent to six target stars, both of which were selected by teenage students (hence, the Teen Age Message). Depending on the star, the messages should reach their target destination between 2047 and 2070. (Far quicker than the 25,000 years the Arecibo Message will take!)

As an interesting side note, teenagers have played a fairly important role in our attempts at contacting alien life. When Sagan included “Johnny B. Good” on the Voyager Golden Records, critics complained that rock music was too adolescent. Sagan replied, “There are a lot of adolescents on the planet.” 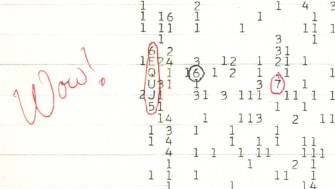 The original printout of the data that prompted astronomer Jerry Ehman to write “Wow!” in the margins, giving the signal its name.

In 1977, the Big Ear radio observatory at Ohio State University picked up a signal coming from the constellation Sagittarius that was 30 times as powerful as the average background radiation of space. The signal was so striking that astronomer Jerry Ehman circled it in red ink on a printout and wrote “Wow!” in the margins, giving the signal its name.

To date, this is the strongest candidate for an intentional alien communication that we’ve received on Earth. For one, the signal’s frequency was beamed at around 1,420 MHz. Hydrogen, the most common element in the universe, also emits radiation at 1,420 MHz, making it an easily recognizable signal to any sufficiently advanced civilization. What’s more, when we studied alternative sources of the signal (i.e., an Earth-made signal reflected off of space debris, a signal emitted by distant comets), no theoretical sources matched the nature of the signal particularly well.

So, in 2012, 35 years after the first signal was detected, humanity sent a response. Ten thousand Twitter messages, including one from Stephen Colbert, were beamed back at the signal’s source.

Since alien life isn’t likely to be able to read Earth languages and may not even possess eyes to view the many videos and pictures included in the response, each message contained a repeating-sequence header to mark it as an intentional communication from intelligent life. The nearest sources of the Wow! signal were between 338 and 1,000 light years from Earth, however, so when the messages are finally received, both the hypothetical source civilization and humanity will be very different. 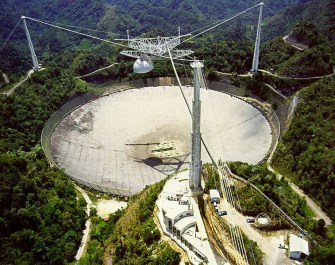 An aerial view of the Arecibo Observatory, which some may recognize from the 1997 film GoldenEye.

We’ve come along way since 1974, so it makes sense to send out more messages as we progress technologically and culturally. Currently, the Arecibo Observatory has challenged students to develop a new Arecibo Message. The observatory is asking teams of 10 students to create a message for alien civilizations, including the target stars and the energy of the signal. The Arecibo Observatory has also asked teams to in some way address the ongoing concerns over the risk of exposing humanity to unknown alien civilizations and communicate our peaceful intentions. After selecting the winners in September 2019, the new Arecibo Message will be beamed out to the broader universe in celebration of the 45th anniversary of the original message.

How did the troughs form?
Up Next
Health

As the popularity of sparkling waters grows, many wonder if it represents a fresh turning point or a crisp new snake oil.