The water bear — those minuscule, nigh-indestructible, spacefaring, radiation-proof, eight-footed, weirdly adorable creatures that hang out in mosses and lichens the world over. Turns out these microscopic supermen may not be as impervious as we thought. In fact, new research suggests that there is a kryptonite for tardigrades: climate change.

For the unfamiliar, tardigrades — commonly referred to as water bears — are 0.5 mm-long (0.02 inches) creatures with four pairs of legs who have garnered internet fame for their extreme durability and their half-cute, half-terrifying appearance. They are extremophiles, capable of withstanding incredible heat, cold, and pressure. For instance, they can survive for a few minutes at 151°C (304°F) and a few days at -200°C (-328°F), they can withstand the vacuum of space and greater pressures than those found in the Marianas Trench, they can survive dehydration for decades, and they can handle 1,000 times more radiation than what would prove fatal to other animals.

In part, this incredible durability comes from their ability to enter into a state known as cryptobiosis. In this state, their metabolism decreases to 0.01 percent of normal levels, and they form a protein in their cells in place of water that protects their DNA in a glassy coating.

For these reasons, scientists believe that tardigrades may be capable of spreading life to different planets. If an asteroid were to strike Earth, shooting chunks of land out into space with a few hitchhiking tardigrades, the plucky creatures would hunker down, enter cryptobiosis, and endure the highly irradiated vacuum of space while they waited for their ride to crash into a planet suitable for life. 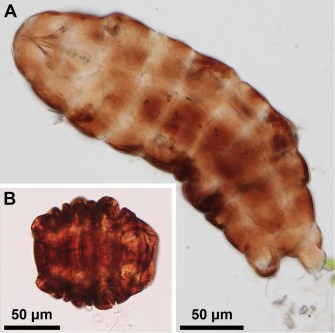 A) An image of a tardigrade in its active state, and B) an image in its cryptobiotic state. During desiccation, an active state tardigrade contracts its body longitudinally and withdraw its legs to enter cryptobiosis.

Unfortunately, however, tardigrades do seem to have a fatal weakness. “We had found their Achilles’ heel,” researcher Ricardo Neves told Newsweek. “Tardigrades are definitely not the almost indestructible organism as advertised in so many popular science websites.”

As it turns out, tardigrades are unable to survive sustained high temperatures. Even though they can endure a few minutes at 151°C, long-term exposure to far less than that blistering temperature killed half of the water bears in the researchers’ sample.

Specifically, these scientists collected tardigrades from roof gutters in Denmark, the country where the study was conducted, and exposed them to temperatures of 37.1°C (98°F) for 24 hours. Half of the sample perished, a worrying result considering that the highest temperature recorded in Denmark is 36.4°C. Since global temperatures are rising, more and more tardigrade populations could be put at risk.

The researchers also tested out whether a more gradual heating process would improve survivability — after all, the environment doesn’t just suddenly jump from mild to boiling. Unfortunately, improvements were marginal in this case — half of the tardigrade sample had died once temperatures reached 37.6°C.

What about their famous ability to enter cryptobiosis? When the tardigrades were first dried out to coax them into entering this state, they fared a bit better. In this case, half of the sample was able to survive 24 hours at 63.1°C (145.6°F). It’s important to note, too, that this study examined the tardigrade species Ramazzottius varieornatus, which is known to be one of the hardier varieties of water bear.

“Before our study,” said Neves, “tardigrades were regarded as the only organism on Earth to survive a cataclysmic event, but now we know this is not true. [While tardigrades are] among the most resilient organisms inhabiting our planet, it is now clear that they are vulnerable to high temperatures. Therefore, it seems that even tardigrades will have a hard time handling rising temperatures due to global warming.”

Still sturdier than us

Still, it looks like tardigrades will certainly outlast us regardless. Most humans would die from hyperthermia within 10 minutes of exposure to temperatures in the 60°C range, compared to cryptobiotic tardigrades’ 24 hours. Considering that climate change will increase drought conditions and gradually raise temperatures, it seems likely that they’ll adapt to these new conditions — it’s not a stretch of the imagination to think that they might enter cryptobiosis as a kind of heatwave hibernation, waiting until a bit of rain falls or temperatures drop.

As the globe heats up and humanity abandons the hottest regions of Earth, it seems likely that only the hardiest species will remain behind. Cockroaches, D. radiodurans, and tardigrades will likely inhabit the places we once did until it gets too hot for them, too.

Being mortal makes life so much sweeter.
Life

We want to fight invasive species. But to wage a war, you have to know who your enemy is.
Up Next
Neuropsych