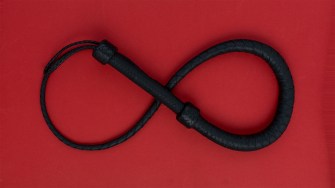 Goldwert’s book, Bow Down: Lessons from Dominaxtrixes on How to Get Everything You Want, became the distillation of the knowledge she gained from interviewing current and former dominatrixes. (And the inspiration for this article.)

Outside of our bills, our discretionary income is a tool to get us to our goals. And yet, we spend our money to please other people’s expectations of how we should live our lives. This can mean going out for friends’ fancy birthday dinners, attending destination weddings, or buying or leasing a fancier model car. I started to think about all my purchases and the purpose they serve. And if they don’t serve a purpose that will make my life better, I try my hardest to avoid making them. Who is this purchase for? How will it help me? There needs to be an answer.

In addition to making your funds submissive, Goldwert recommends you know your financial “positions of power.” A pro-domme understands the power dynamics of any interaction and can subtly shift those to make a session work for both parties. But too few people recognize what power they employ in an interaction.

If an employee does her job well, then she is worth the extra money. And should she seek opportunity elsewhere, her supervisor must find a replacement, train that person, and patiently wait for them to reach a seasoned employee’s level of productivity. All of which costs time and money.

Sometimes power dynamics won’t be in your favor, though. A boss’s personality may try to dominate any interaction. A question can take you by surprise. And nothing makes more people want to curl up into a submissive ball than public speaking.

For example, when a boss tells a woman subordinate, “That skirt looks very pretty on you,” she can shift the focus away from herself and to him with the comeback, “Where did you get that shirt?”

Social anxiety: How to rewire your confidence and be a better communicator

Even if you prefer being the submissive, there are times when you’ll need people to listen to you. Writing under a pseudonym for Vice, pro-domme Margaret Corvid offers advice for anyone needing to be, and to stay, in command of a speaking engagement. She recommends:

While Corvid’s article spotlights translating these techniques toward public speaking, they can also be retrofitted toward any skill or craft you wish to master and help you gain authority over your life.

We all know assholes. Perhaps, you are one. Now, psychologists are trying to answer one of life’s biggest mysteries: What, exactly, makes someone an asshole?
Life

Cats know more than they let on.
Up Next
Starts With A Bang

A young cluster of new stars, named Price-Whelan 1 (PW 1), is located 94,000 light-years away in the outskirts of our Milky Way, but was formed by material ejected from […]