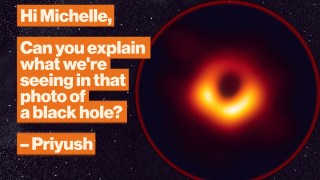 The recent photo of a black hole is something extraordinary. Here's why.
▸
6 min
—
with
Michelle Thaller

MICHELLE THALLER: One of the things that I honestly thought I was never going to see was the black part of a black hole, actually looking into the heart of a black hole and seeing the area that was dark, or where light is being absorbed. And it's amazing to me that humans have done this. I mean, this has to go down as one of the most incredible accomplishments of modern astronomy. So when you look at that image-- I mean, it's kind of a messy image. I mean, it looks sort of like a coffee mug stain, that you just picked up your cup and there's a bit of a ring. But what are you actually seeing? The answers are so profound and so dramatic that I hope you never look at that little stain again without getting goosebumps. So what you're looking at is something called the shadow of the black hole.

Now, black holes tend to have material orbiting around them. Black holes have a lot of gravity. And gas begins to fall in towards the black hole, and it begins to spin up into a disk around the black hole. And as that gas gets closer and closer to the black hole, it's accelerated faster and faster. And so in this disk of gas, some of it is traveling very close to the speed of light. You have a lot of friction. You have lots of things rubbing up against each other at very high speeds. And incredible amounts of heat and light are generated in this disk. So black holes, usually, are surrounded by disks of very, very bright, very hot material. And that's how we find them. Black holes themselves give off no radiation at all. Any light gets absorbed into the black hole. And when I say, light, I mean every possible form of light, from gamma rays, X-rays, infrared light that we think of as heat, radio waves-- nothing comes out of a black hole at all. So what you're looking at in this image is the black hole is sort of framed by this bright ring.

And that bright ring is this hot material that's orbiting around the black hole. And one of the first things you'd say, well, OK, it's really kind of a wonderful stroke of luck that the particular black hole we're looking at, the ring was right face-on to us. You see this bright ring exactly around the black hole. And in fact, that's probably not the case. The disk of material could be at many different orientations around the black hole. But here's the weird thing about a black hole. A black hole's gravity is so intense it actually restructures space and time. Light itself has no mass. Light should not be attracted by gravity, right? Gravity is the force between two things that have mass. Light has no mass. It just flies straight through space. So why should light be affected by a black hole? And amazingly, this is what happens.

A black hole's gravity is so strong it actually bends the space itself. So light thinks it's traveling through straight space, just traveling in a straight. The disk can be at pretty much any orientation you like. What will happen is light from any part of that disk will get bent around the black hole. In a very real way, to see the underside of the disk at the front of the black hole, the back side, all the way over the front. Because light itself is being bent around. So if there's any hot, glowing material at all, you're going to see it sort of surrounding the entire black hole because the light's been bent around it. So what's that dark center that you're seeing? Is that actually the black hole itself? The actual size of a black hole is something called the event horizon. Now, a black hole doesn't have a solid surface. But there's an area that, when you get close enough to it, space is actually bent back into the black hole.

You really can see this dark shadow, where light is not only absorbed going to the black hole, other bits of the light are orbiting around it and going in on the back side as well. So this was an image that blew me away. I did not think they'd be able to do this. The particular black hole they're looking at is about 50 million light years away. That's incredible. It's at the heart of a galaxy. And the mass of that particular black hole is a couple billion times the mass of the sun. So this object is-- the event horizon is about the size of a little bit more where the orbit of Pluto is in our solar system. So the whole thing is about the size of our solar system, but it has the mass of somewhere between three and five billion suns in that area. And that's enough mass to bend space and time itself. And that's what you're looking at, you're looking at the bending of space and time.

There are 2 types of god. Only one is within the boundary of science.