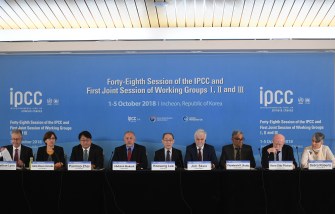 Members of the UN Intergovernmental Panel on Climate Change (IPCC) meet in South Korea in October 2018.

The problem, as I see it, is that there isn’t the political will to make the serious changes we need to in order to stave this off.

Stave what off, you ask?

It’s the point—an increase of 1.5 degrees C or 2.7 degrees F—at which the things that we take for granted, like arctic ice and even the ability to live anywhere near the equator, disappear. The UN Intergovernmental Panel on Climate Change (IPCC) just issued a report on this that is, well, terrifying.

The report is written by 91 authors and 40 review editors, and it features 133 contributing authors, 6,000 scientific references, and was subject to over 42,000 expert and government review comments before publication.

If we don’t reverse the current trends in a huge way, then extreme drought, floods, wildfires, food shortages for millions of people across the globe will be the norm for everybody. Well, except, perhaps, for those living at one of the poles.

“One of the key messages that comes out very strongly from this report is that we are already seeing the consequences of 1 degree C of global warming through more extreme weather, rising sea levels and diminishing Arctic sea ice, among other changes,” said Panmao Zhai, co-chair of IPCC Working Group I.

If we don’t? All of what’s in the paragraph above, as well as:

Reduction in Arctic Sea Ice, since 1980

We’re two-thirds of the way there now, and in 12 years, that is the tipping point at which we cannot affect anything anymore. In other words, that’s when it goes beyond a 1.5 degree increase in global average temperatures and the “feedback loop” that is the Earth will deteriorate to a point where we will have no way to stop the process.

In fact, with the course we are currently on, it’s going to be double that temperature; we’ve already seen an increase of 1 degree since pre-industrialization, and there’s really nothing slowing it down.

“The window on keeping global warming below 1.5 degrees C is closing rapidly and the current emissions pledges made by signatories to the Paris Agreement do not add up to us achieving that goal,” stated Andrew King, a climate science expert at the University of Melbourne. 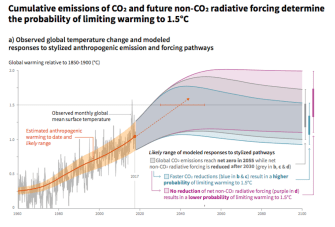 The last time I researched this, 2050 was the year that they pegged. Moving that up by 20 years—effectively, the same as moving the atomic scientists’ Doomsday Clock ahead by two minutes—makes it seem all that more pressing.

But given the political climate of the world right now, it looks extremely unlikely that we’ll do anything about it.

So is it time to invest in beachfront property in Antarctica?

Since 99% of us can’t do that, here are some ideas on what you can do, from the UN report.

The report says there must be rapid and significant changes in four big global systems: Energy, land use, cities, and industry. But it adds that the world cannot meet its target without changes by individuals, urging people to:

Deliveries of the $250k Lightyear 0 will start in November 2022.
Up Next
Diversity & Inclusion

How to Make Diversity Training Stick (And Not Fail)

Achieving successful diversity training can be a challenge for many employers because employees may regard this type of mandatory training as unnecessary, cumbersome, tedious, or even aggravating. Many view them […]