Lighting strikes in the Arctic may increase by approximately 100 percent by the end of the 21st century, according to a new study published in Nature Climate Change. If that happens, places like Alaska could suffer significantly higher rates of wildfires and permafrost loss, both of which could accelerate warming in the Arctic.

Some evidence suggests these changes are already underway. In 2015, Alaska suffered the second-most wildfires on record, burning more than 5.1 million acres across the state’s northern region. Although it’s difficult to measure, lightning likely started many of these fires.

Still, lightning is relatively rare in the Arctic. That’s because lightning occurs when warm, moist air rises to meet cold air, which builds up electrical charge. When that charge exceeds a certain threshold, lightning strikes. Because places like Alaska have relatively cold, dry air, thunderstorms only form occasionally.

But climate change may be changing that. In 2019, the National Weather Service’s office in Fairbanks, Alaska, reported an unusually high number of lightning strikes within 300 miles of the North Pole. The uptick in lighting may be no surprise, considering the Arctic is warming by more than twice the global average.

In the recent study, researchers used satellite observations and climate data to explore how increasingly frequent lightning could transform the Arctic through changes like increased wildfires and permafrost loss.

“We projected how lightning in high-latitude boreal forests and Arctic tundra regions will change across North America and Eurasia,” Yang Chen, study author and research scientist in the UCI Department of Earth System Science, said in a press release. “The size of the lightning response surprised us because expected changes at mid-latitudes are much smaller.”

What’s especially concerning about the uptick in Arctic lightning is that it could start a “lightning-fire-vegetation feedback loop.”

The researchers explained how more lightning could cause more wildfires, which would burn away many of the shrubs, mosses, and other low-lying plants covering the Arctic terrain. Without those plants covering the ground, soil temperatures would rise, making it easier for deciduous trees to grow.

That might sound like a good thing. But expanding forests could also cause regional temperatures to rise because they would absorb more sunlight than the reflective, snow-covered Arctic terrain currently does. What’s more, wildfires would melt Arctic permafrost, which stores massive amounts of organic carbon.

The end result of the lightning-fire-vegetation feedback loop would be the release of carbon into the atmosphere. 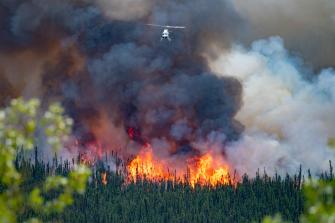 Still, the variability in climate modeling and lightning monitoring makes it difficult to predict future changes with a high degree of accuracy.

“This phenomenon is very sporadic, and it’s very difficult to measure accurately over long time periods,” James T. Randerson, study co-author and professor in the Department of Earth System Science at the University of California, Irvine, said in the press release. “It’s so rare to have lightning above the Arctic Circle.”

The researchers concluded the study by calling for more high-quality lightning monitoring systems, based on the ground and in space.

“Given the large amount of permafrost soil carbon stored in northern ecosystems, this analysis highlights the importance of improving lightning monitoring in the Arctic and the need to develop better models of lightning, fire dynamics, and feedback with vegetation and soils,” they wrote.

The mediocrity principle is often used to make claims about the abundance of life across the universe, but these claims are likely unfounded.
The Present

Do we know for sure that climate change is to blame for extreme weather events? Yes, sometimes

A decade ago, scientists weren’t able to confidently connect any individual weather event to climate change, even though the warming trends were clear.
Hard Science

How many stars are in the universe?

Try this: It’s about 10 times the number of cups of water in all the oceans of Earth.
13.8

Civilization is facing an existential threat from climate change. Will we humans make it? Does anyone in the universe make it?
Hard Science

The unconventional method could help astronomers better track meteorites that fall during the daytime.
Up Next
The Present