"Hothouse Earth" is basically a self-sustaining engine of warming and carbon. Ummm... 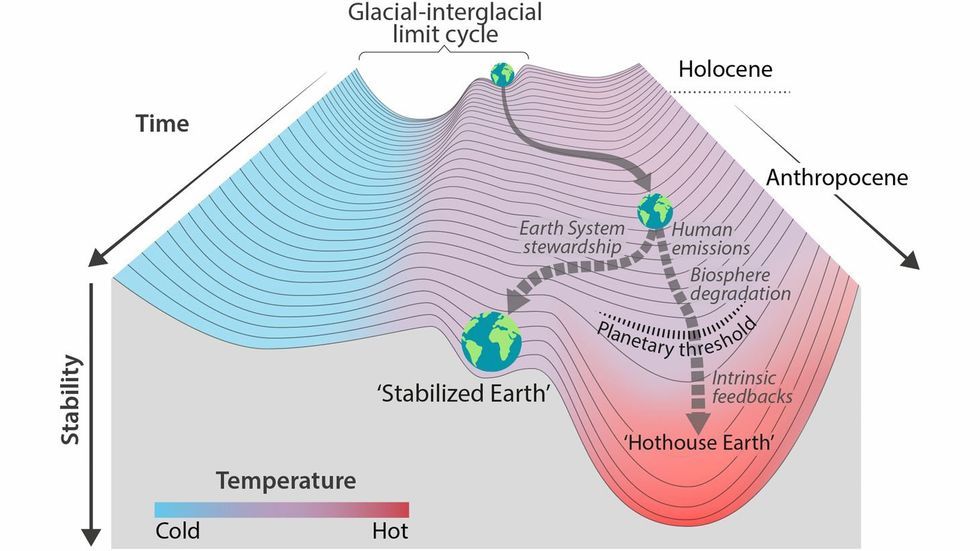 We are, suggest scientists publishing in the Proceedings of the National Academy of Sciences, just one degree (C) away from hitting a “tipping point” beyond which the planet has never experienced.

Beyond that temperature, our world will be in what the scientists are calling a 'Hothouse Earth' state, where climate change will be absolutely uncontrollable, and vast regions will be uninhabitable.

Flames from the Rocky Fire approach a house on July 31, 2015 in Lower Lake, California.  (Photo by Justin Sullivan/Getty Images)

"We note that the Earth has never in its history had a quasi-stable state that is around 2C warmer than the preindustrial and suggest that there is substantial risk that the system, itself, will 'want' to continue warming because of all of these other processes—even if we stop emissions," study author Katherine Richardson from the University of Copenhagen told The Guardian.

What happens after that threshold is reached is that Earth’s feedback loop, which normally cools the planet and offsets some of the human activity, will actually fail. Or, rather, it will reverse. More carbon is fed into our atmosphere as rainforests dry up and permafrost melts, releasing methane. That self-reinforces the warming effects we’re already seeing. And as more rainforests evaporate, Arctic permafrost melts, ice caps at both poles of the planet disappear, and coral reefs die off, even more carbon is released into the atmosphere, adding yet more fuel to the dysfunctional system. Basically, it means Earth itself becomes a primary source of greenhouse gas emissions. It will come to a point where nothing humans can do will help mitigate the changes.

While the scientists who penned the article are stating this is not yet a theory, but rather an extension of existing scientific studies providing more food for thought, predictions include:

“I do hope we are wrong, but as scientists, we have a responsibility to explore whether this is real,” said Johan Rockström, executive director of the Stockholm Resilience Centre and one of the study authors. “We need to know now. It’s so urgent. This is one of the most existential questions in science.”

If the magic (?) number of 2 degrees sounds familiar, it should; that’s the target (ideally, 1.5 degrees) that the Paris Agreement, originally signed by 179 countries (with the United States pulling out of last year), spelled out for a reduction in carbon emissions this century.

However, even if the world ceased all carbon emissions by 2050, that’s still not enough to stop the feedback loop from cascading into the nightmare scenario outlined in the paper:

“If the [2 degree] threshold is crossed, the resulting trajectory would likely cause serious disruptions to ecosystems, society, and economies.”

Also, the event would pose "severe risks for health, economies, political stability, and ultimately, the habitability of the planet for humans.”

Think this will make anybody sit up and take notice?