Do you have a good smile? It is perhaps our most significant instrument of nonverbal communication that can go a long way in smoothing out social interactions. It is also of interest to scientists who are trying to figure out how our facial expressions affect others. A new study found that there is what’s called “a successful smile” – the one that gets the best response.

Researchers, led by Professor Nathaniel Helwig from the University of Minnesota, showed a series of 3D faces generated on a computer to 802 study participants. The faces had slightly different expressions, with variations in the mouth angle, the size and symmetry of the smile, and how much of the teeth you could see.

Here’s how the scientists explained what these criteria were (based on the drawing below):

“Mouth angle is the angle between the green and blue lines. Smile extent is the length of the green line. Dental show is the distance between the lower and upper lips.” 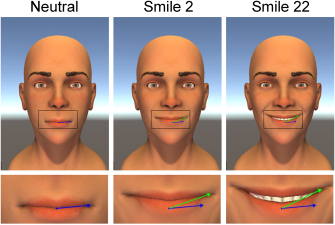 The study’s subjects rated the smiles on how effective, genuine and pleasant they appeared as well as what participants thought was the emotional intent behind each smile.

What’s perhaps counterintuitive about these new findings is that a “successful smile” does not mean it’s the biggest, most teeth-baring, ear-to-ear grin. A smile that is most effective and genuine has to have a balance of teeth, mouth angle and extent to hit what the researchers called “the sweet spot”. But within that prescription, there is variation in how those elements are combined. There is not just one way to have a well-received smile.

Smiles that were rated the highest were also developed symmetrically, with the left and right sides of the face synced up in no more than 125 milliseconds. Interestingly, slightly asymmetrical smiles were found to be even more attractive. The same held true for very wide smiles with fewer teeth. Smaller smies, without much of a curve were interpreted by the subjects as contemptuous. Too much smile angle and extent was deemed fake or creepy. A bigger smile isn’t necessarily better.

The researchers hope to use their findings to develop a stronger understanding of how we read the faces of others. The study can also lead to advancements in facial reanimation and reconstruction surgery.

You can read the study in the journal Plos One.

Do We Need Philosophy in Prisons?

With the American prison system coming under fire for being inhumane, could philosophy provide some much needed compassion to its prisoners?